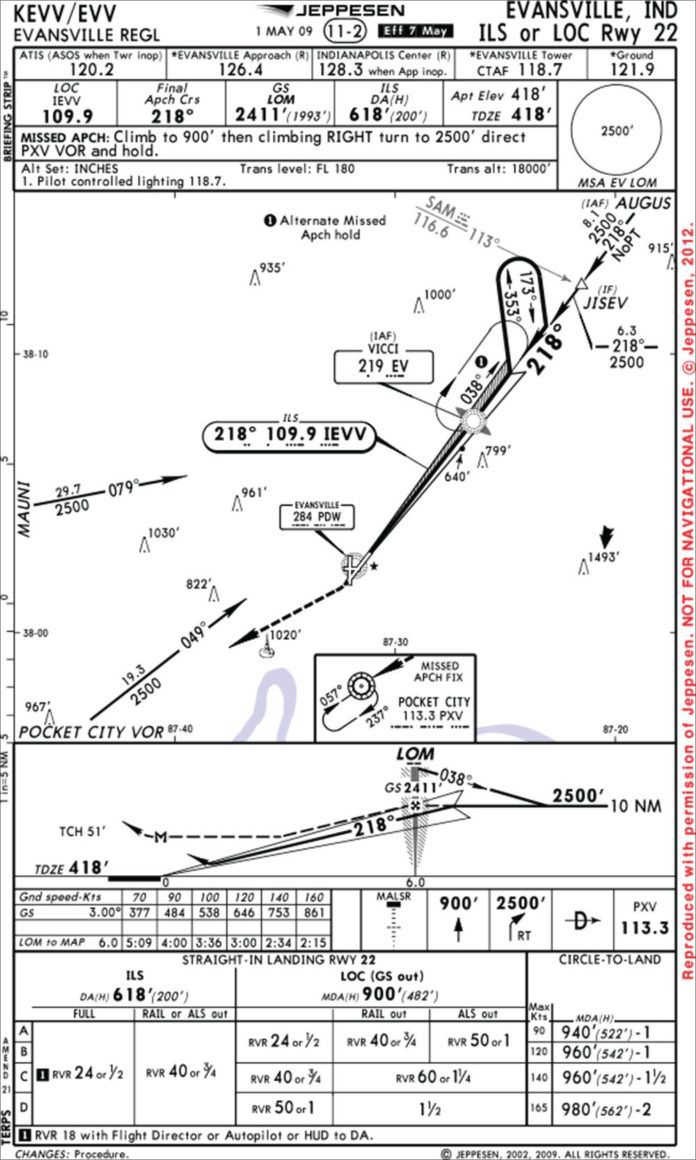 The AIM and the ATC bible, the 7110.65, say different things about clearing an aircraft direct to an intermediate fix. If you’re not careful, you may end up in a fix yourself.

When you’re flying a high-tech aircraft, you expect any fix the controller throws at you will be ready to go in your database. That’s probably why an Eclipse pilot accepted a clearance to JISEV for the ILS Rwy 22 approach into Evansville, Ind. JISEV is an intermediate fix (IF) for the approach, and clearing the aircraft to it and then for the approach acts as a proxy for vectoring the aircraft onto the final approach course. Neat and simple for everyone.

Except that when the Eclipse owner went to enter the direct into the FMS, JISEV wasn’t in the database for that approach. It was there for the RNAV (GPS) Rwy 22, where it’s an IAF/IF, but not the ILS. What now?
The two sides of the ensuing radio foray worked it out, but the pilot ascertains it was the controller’s fault in that it was a bad clearance: The controller shouldn’t have cleared an aircraft direct to the IF for an ILS.

Codified Mis-Match
There are several ways to look at the situation. By the book, the pilot is correct—but only real procedural nerds (like most of the staff and readers of this magazine) would know it. The AIM guidance makes this clearance look completely valid. AIM 5-4-7(i) says, “ATC may clear aircraft that have filed an Advanced RNAV equipment suffix to the intermediate fix when clearing aircraft for an instrument approach procedure.” There are conditions such as radar monitoring and an intercept angle of 90 degrees or less but, per the AIM, it’s legit.

The controller’s 7110.65 has almost the exact same verbiage with all the same conditions—plus one: “The instrument approach procedure is a GPS or RNAV approach.” The AIM isn’t regulatory, but the 7110.65 is very much a rule book. So, the pilot is correct that it was—technically—a bad clearance.
We emphasize the “technically” part because, had the pilot been able to fly the approach, there would have been nothing bad about it. In fact, we polled our controller sources and found that clearing RNAV aircraft to IFs on non-RNAV approaches is common in some facilities. This was the first time anyone had heard of a pilot complaining.

It turns out that the FAA is aware of the discrepancy between the AIM and the 7110.65 and is planning some changes. We got ahold of draft changes to both documents and discovered there is more in the works than just this IF issue. But on the clearance to an IF, it appears that the new rule will be that an RNAV aircraft can be cleared directly to an IF for any kind of approach, so long as certain criteria are met, such as no more than 90 degrees of intercept.

The new text goes further to say an aircraft can be cleared to a fix between the IF and the FAF, so long as the intercept is no greater than 30 degrees, and adds requirements about ensuring both obstacle clearance outside the IF and a normal rate of descent once the aircraft is on the approach. We wonder about that latter one given how controllers inadvertently create slam dunks under current rules requiring a normal descent rate. Maybe it’s the new normal.

The changes also include a clarification on the long-standing procedure of clearing an aircraft directly to an FAF that is also an IAF and has a hold-in-lieu-of-procedure-turn (HILO). It’s been a recurring question among pilots whether they are expected to fly the procedure turn in these situations or just proceed straight in. It’s especially sticky because the AIM makes it look like the HILO is required because the pilot isn’t on a “NoPT” route. But it’s actually a waste of fuel in most cases when the direct course is almost identical to a vector to final. Controllers have long thought that way, and get all bent out when the pilot dutifully flies the published hold rather than getting on with approach already. The fix for this has been to clarify you were cleared to the FAF and for the “straight-in approach.”

That option is going away. Controllers will have it in black and white that they should expect any aircraft cleared to an FAF to fly the HILO no matter what angle they approach from—and that means you should, too. “If the pilot desires a straight-in approach, they must request vectors to the final approach course outside of the FAF or fly a published NoPT route.” However, there will be the exception: “When visual approaches are in use, ATC may clear an aircraft direct to the FAF.”

What if the HILO is at the IF and you’re cleared direct to that but not on a NoPT route? In this case, the straight-in is still an option and the controller must explicitly say whether they want it or not. Of course, you can put in your two cents as a request.

One last change mentioned here: You can be cleared to fly an ILS or LPV approach even if the glideslope is unavailable so long as the localizer or LNAV approach, as appropriate, is on the same plate. ATC does still have to tell you the glideslope is out (presuming they know), but they don’t have to call it a localizer approach specifically.

It’s Still Your Fault
So you’ll need to be ready for all this by, well, probably some time in 2013. But regardless whether the practice is codified or just common, we have to make one final comment on the situation that started this investigation.

While it’s true “direct JISEV and cleared for the approach” was technically wrong, the pilot is not blameless. He accepted a clearance he couldn’t fly—and assuming he could fly it doesn’t cut it. It’s an easy trap to fall into, so here’s a best-practices fix to keep your nose clean: Accept the clearance as “When able, direct JISEV, cleared …” Or better yet, ask for a heading and then “when able.” If you discover you can’t do the direct, “when able” becomes “unable,” and you ask for good old-fashion vectors.