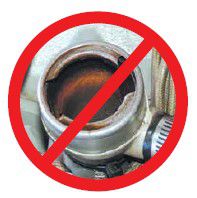 With a new private ticket in his wallet, the now-instrument student finished his preflight. No supervision needed, right? Out strode his CFII, who walked around the airplane, checking critical items. He glanced up and spotted a missing inspection cover under the wing. Pointing out this omission, the student asked, “We can still go, right?” The instructor glared at the student. “Wrong! Are you a test pilot? No. Neither am I. This airplane is grounded.”

In a repeat resembling Groundhog Day, on another lesson, the instructor checked the fuel caps and found none. Duct tape covered both filler ports. Again: “Can we go?” “No!”

“No” became “Yes” when the instructor realized there was an identical- but-engineless airplane tied down alongside. With a quick swap of tape for tank caps, they went their way—after a pointed lecture about how this would have been an instant emergency.

In another sticky incident involving another student, the instructor checked the oil but found the dipstick missing. The student had said nothing and got— yup—a stern lecture about the importance of oil. Flight canceled.

“I just bought this airplane.”

There is hardly anything scarier than those words. The former owner likely decided, “I’m not putting another dime into this airplane,” the day he decided to sell it. Even a fresh annual needed to sell the airplane can be meaningless.

The new owner of a 182 asked the pilot to fly him and two friends to a lunch spot 100 miles away. This naïve pilot agreed after he figured that the weight and balance, and fuel required would work safely. He earned a free lunch and a nice tip.

Feeling smug, the pilot encountered an AMT, who was incredulous. “You flew that thing? It hasn’t had a 20-yearold AD complied with on the aileron pulleys. You bet your life for flight time and a free lunch!” The pilot should have said “No,” but he took the annual to be conclusive. Once his legs stopped shaking, the less-naïve pilot became warier.

The flight school’s chief pilot assigned an instructor to fly a customer’s elderly 182 to an airport 30 NM away. There was low IFR in the area. Red flags started popping up.

A big one showed when the landing light popped the circuit breaker. The panel was a disorganized mess of instruments defying standard scan. Now extra-wary, the pilot found the Garmin 430 database was two years out of date.

The pilot was ready to refuse the flight and risk his job, but not his life. He averted a confrontation by stalling until there was insufficient time to complete the flight. Flight canceled, career and possibly life saved by saying, “No.”

VPO: Volunteer Pilot Organization. Most promote a safety culture, but not always. This particular VPO asked pilots to fly disabled kids and let them have the controls for a bit, with a minder aboard. About 60 pilots showed up, so many at once that they overwhelmed the tower and ATC’s radar.

The assigned flight path took too long and had many turns. Minders in the back got airsick with all the turns in warm, bumpy air. Since the flights were not staggered and flew the same route, the midair risk was acute.

Some pilots declined and flew off after one trip, leaving other pilots to pick up the slack. Murphy stepped in when an airplane became disabled at the intersection of the airport’s two runways, closing the airport. Extracting himself from a situation out of control, a pilot landed at another airport until the airport reopened and ATC restored order.

A young teenager, not disabled, had been promised a flight at the end of the day. He was very eager, but the pilot declined if both parents went because they would overload the airplane. Dad agreed to stay behind, and the kid got his flight. Hopefully, he’s a pilot today.

Angel Flight and similar VPOs never make a flight the only way to get someone where they need to be. Whether illness, a battered wife, or anything else, there is always another way, by car, rescheduling an appointment, whatever. No pilot should be asked to or do anything that makes them uncomfortable.

Too Good to Be True

A young pilot was offered a spot flying a contract flight with a local university. It immediately smelled fishy because good gigs go fast and don’t need promotion. The university loaded the flights to gross weight. The route was nap-of the-earth at under 100 feet AGL, just above stall speed, and had to follow a
strict grid pattern on a tablet computer. The pilot said not only “No,” but “Hell, no,” when he learned that the previous aerobatic-qualified pilot had quit.

The flight school owner took the last flight. Tired, in over his head, busting many regs, he crashed. All four aboard were killed. Had this ATP, jet-qualified pilot said, “No,” his wife would not have been left widowed and penniless, nor his children left fatherless. Such is the power of “No.”

Airborne, the TAA pilot discovered that the engine would not run without the fuel pump running. He elected to finish his practice approach, then return to base.

After landing, the airplane was dripping fuel all along the fuselage. On inspection, the mechanic said, “This is the worst leak I have ever seen.” The aircraft had become a flying bomb. Listen to that little voice in your head. It rarely lies. If in doubt, get it out—of the air.

Flying offshore, ATC assigned a pilot an altitude beyond gliding distance from land. The pilot repeatedly said, “unable.” After several exchanges, the exasperated pilot declared an emergency. Parrot-like, ATC came back with “State the nature of your emergency.” The pilot answered, “Your clearance.” The controller chuckled, and they worked out a clearance that met both of their needs.

Learn to distinguish can’t from won’t. Learn to manage problems as quickly as they appear. When you know what action is necessary, do it. Lives are lost because of pilots’ disbelief: “This can’t be happening to me.” Don’t suppress those feelings; acknowledge them, then act as necessary.

Don’t waste time blaming others or the circumstances: “If only…” Hope has no place in a cockpit: “I hope we have enough fuel.” As of that moment, you don’t. Our favorite cliché these days holds truth: It is what it is.

Assert your priorities as a pilot-in-command. Evaluate the risk involved in your decisions by developing sound risk management skills. Be direct about conflicts; offer alternatives. Say, “No,” to inappropriate, unsafe requests, as we have read above. It’s the essence of being PIC.

Say, “No,” to demands that violate your values or to demands someone needs to fulfill themselves: “I must make that meeting.” Say, “No,” when you’re overextended, or when the weather or the airplane doesn’t portend a sure, safe outcome.

Well-known former airline pilot and flight school owner Ralph Butcher has said, “Sometimes you have to be a real bastard to make sure everything gets done safely.” Your license is a license to say, “No.” It is truly the safest word in aviation.