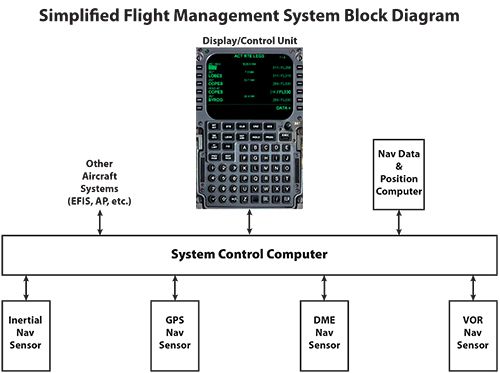 The FAA’s Minimum Operating Network (MON) focuses on serving general aviation. Why? How will the airlines and heavy corporate birds survive a significant GPS outage, and why can’t we have that same resiliency?

To answer that question, we need to start by exploring how the “airlines and heavy corporate birds” navigate. But, before we go any further, note that this is a theoretical discussion and tech exploration; we’re not aware of any particular plans to move in this direction, or of any plans to exclude the possibilities explored here. We’re merely exploring how things could work.

Pilots throw around the term flight management system (FMS) with abandon, but fewer of us understand what it is or how it works. You won’t find a precise or legal definition, but in practical terms an  FMS is a database-driven navigation system. “Database driven” and “navigation system” are separate concepts, but the FMS combines them into one cohesive whole.

Look at the oversimplified block diagram below. Of course, the only visible element in the FMS is the display/ control unit. It then talks with the system control computer that manages the show. To know where you are, the FMS needs access to various navigation sensors, but these operate under the control of the main computer and provide input to the navigation database and position computer for interpretation of the position information, that’s then sent back to the display/control unit and to other aircraft systems.

Let’s use your familiar GPS navigator as an example of the FMS. For our purposes, say your navigator is a GPS only with no comm or VHF nav. You have the display/control unit, the system control computer, the nav data and position computer, and of course
the GPS sensor.

Early navigators didn’t have much or even any database, so the information provided was merely a latitude/ longitude position report. This is essentially what’s available from GPS sensors today. Your FMS then takes that information and digitally “plots” it within the nav data, to tell you in aviation terms where you are.

But in addition to raw position data from a GPS, modern high-end FMS can manage other sensors that similarly provide raw position data. These include inertial reference systems (IRS), DME, and VOR sensors.

VHF Nav in Your FMS

We’re all familiar with discrete navigation information from a DME and from a VOR, but the FMS uses these sensors a bit differently. Rather than tuning individual stations and monitoring a single reading, the FMS will scan multiple stations, something your all-in-one navigator doesn’t do outside of GPS.

Let’s look at DME positioning alone, without the others. Say you’re in range of two DME stations. The FMS knows this from its knowledge of your current position (somehow … we’ll get back to that) and with reference to the nav data. The system tells the DME sensor to get a distance from one station and then immediately tells it to get the distance from the other station. DME is actually quite accurate, so this provides a high confidence fix. In fact, it provides two.

Say the FMS knows you’re near the Pierre (PIR) and Huron (HON) stations as depicted on the next page. It directs the DME nav sensor to take readings from both. It determines that you’re 38 miles from PIR and 47 miles from HON.

If you plot those distances, you see that they intersect twice. Are you at ELREE or well north of there? How can you tell?

Every time you use only two measurements to, you’ll have two results. So, the navigation system must have a way to resolve that ambiguity. The easiest way, indeed the only way for a single-sensor system, is to use a third measurement. Your GPS is a single- sensor system. That’s why it needs a continuous view of multiple satellites to get accurate three-dimensional positioning. However, we’re talking here about a single-sensor DME system.

The answer lies in getting a distance from a third DME ground station. That will resolve the two-fix ambiguity down to a single fix, and it will even improve overall accuracy. In fact, that’s exactly what the early DME/DME FMS did.

Today, however, electronics are (generally speaking) inexpensive, highly capable, and compact, so today’s FMS are quite capable and usually have multiple sensors. But, even within the DME nav sensor, today these systems can scan up to five different DME ground stations for a very accurate fix indeed.

But, what if there aren’t multiple DME ground stations within range? The FMS then just relies on other sensors to resolve the ambiguity. When we’re talking about DME/DME positioning, the traditional tie breaker is a radial off of one or more VORs using the VOR nav sensor.

(Like the oversimplified block diagram, this discussion is also quite basic. In reality, once the FMS knows where it is, it can use that knowledge directly to resolve any sensor ambiguity and keep an accurate position. additionally, it remembers where it is, even when powered off. Finally, if the FMS can’t get an initial fix on power up from GPS or VHF, the current position can be manually entered.)

So, with all these sensors, the FMS in heavy-iron need not rely solely on GPS, nor are they in any danger of losing their way if GPS isn’t available. This explains why MON is for the rest of us who do rely solely on GPS.

Isn’t There a Better Way?

Take a last look at that block diagram, and imagine how your GPS navigator works today. As we already discussed, your GPS navigator has the display/control unit, the system control computer, and the nav data and position computer. In most cases, it even has a VOR nav sensor, but that’s not readily under the control of the system. The only pieces missing for a multi-sensor FMS are the DME nav sensor and additional logic in the system control computer. (We are ignoring the IRS because these remain very sophisticated and out of the reach of the typical general aviation budget.)

Will we ever see a multi-sensor, GPS-failure-immune version of today’s FMS built for piston GA? We don’t know; that kind of product roadmap information is kept secret. But, we can hope. To us, it makes sense.

Remember that this whole theoretical discussion is about how to mitigate the risks of an interference-prone, hackable, single-point-of-failure satellite system we call GPS becoming unavailable. The FAA’s plans and expenditures on MON are to give us “little guys” who don’t have multi-sensor FMS a way out. But, we’ve already seen that with the proper equipment that doesn’t now exist, we might not need MON. Are there other options?

Before we answer that, let’s dig a bit deeper into GPS weaknesses. Probably the biggest weakness of today’s satellite navigation systems (GPS, GLONASS) is their use of a single frequency, both for basic navigation and augmentation (like WAAS). Thus, anyone with a sufficiently powerful transmitter narrowly tuned to that single frequency, can completely disrupt navigation.

But, couldn’t our navigators use both GPS and GLONASS, providing at least two frequencies? After all, our cell phones do. Yes, technologically, that’s a no-brainer, but the TSO hasn’t kept up, so such a navigator couldn’t be certified.

Such a “fourth generation” TSO is evolving with multi-constellation support (including constellations merely under development today), but also with support for multiple frequencies per constellation.

Multi-frequency, multi-constellation receivers solve multiple problems and are likely where we’ll eventually end up. Not only are they more resilient against jamming, they’re also more resistant to hacking the signals. They also solve various technical problems
like variable signal distortion as the satellite’s transmissions pass through the ionosphere. Such errors like these can’t be characterized accurately, but the multiple sources would largely mitigate them.

Maybe the FAA won’t need MON. Should they wait for all this? probably not. The future, while planned, is far from here and the timing is anybody’s guess. MON is a solid plan for today’s equipment, and will last until something better is available off the shelf.