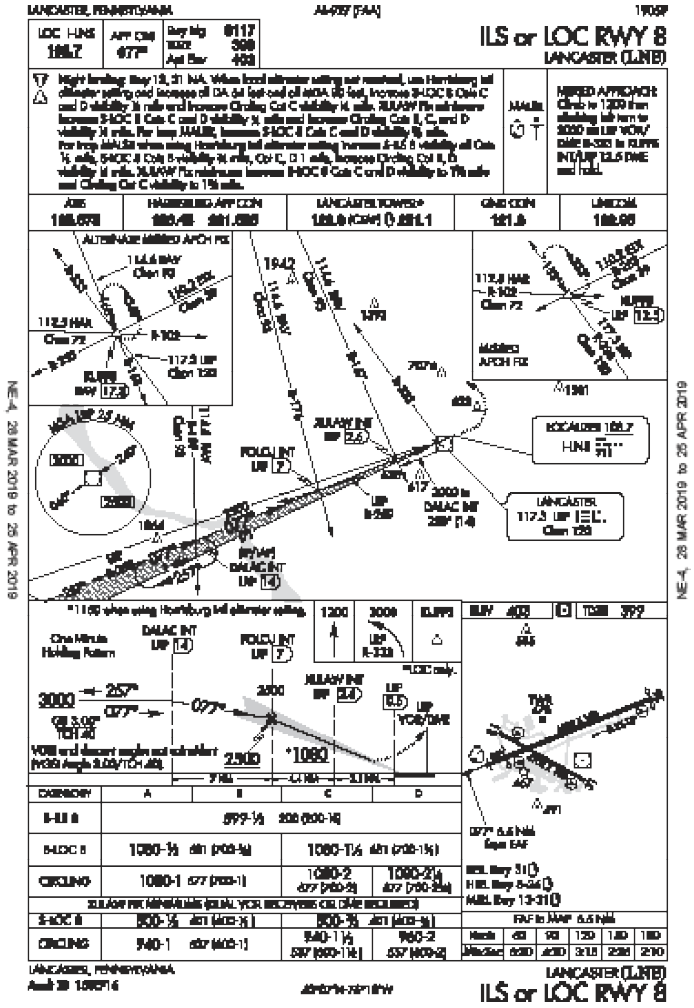 Arriving at your destination on a dreary day, ATC queries you with “say approach requested.” The landing runway has an ILS and an RNAV (GPS) approach with identical LPV minimums published. Which do you choose? You would be forgiven for thinking, as we initially did, that this is a bit of an inconsequential question. WAAS has enabled satellite guided approaches to have precision comparable to Category I ILS approaches, so what difference does it make? Although true, this doesn’t mean that ILS and LPV are identical in all regards.

Fundamentally, LPV and ILS both accomplish the same thing—they get you down to the runway with similar precision, usually with similar minimums, and with equivalent skills needed. Many times they even follow the same ground track (this is the preferred design), such as on the ILS or LOC RWY 8 and RNAV (GPS) RWY 8 approaches at Lancaster, Pennsylvania (KLNS), which have common intermediate, final, and missed approach segments. Digging a little deeper reveals some differences to be aware of that will give you a better understanding of what exactly you’re signing up for when you request that approach.

This change to the allowed LPV decision height is reflective of the evolving TERPS criteria used to develop satellite-based approaches. Originally the criteria for LPV minimums were similar to ILS, but slightly different, potentially resulting in slight differences in minimums. Over the years they have grown into alignment (in fact it was ILS criteria that came to mirror LPV). However, the criteria used to construct missed approaches still differ significantly between ILS and LPV. Therefore, it’s not uncommon to find otherwise similar ILS and LPV designs with completely different missed approaches. In some cases this can result in differences to the decision altitude between the two approaches.

The preferred alignment for both ILS and LPV is within 0.03 degrees of the runway course, but can be offset up to three degrees if necessary. If the offset for a ground-based procedure needs to exceed three degrees, an LDA approach with a glideslope can be developed with an offset of up to 15 degrees using essentially the same design techniques as the ILS. For LPV, three degrees offset is all you get. GPS LNAV/VNAV minimums allow offsets of up to 15 degrees, but are evaluated completely differently than LPV and encompass a larger area.

Considering infrastructure, a single ILS system installation supporting a single runway (typically) requires at a minimum a localizer antenna and a glideslope antenna. Oftentimes there is also a DME antenna, marker beacons, and/or a locator outer marker (LOM). Each of these antennas requires property, monitoring capability, maintenance, etc. Each of them also represents a potential point of failure for the system. It would certainly be an annoyance for the glideslope antenna to go on vacation while you’re halfway down final.

Since LPV requires no local infrastructure that can fail, so it’s better, right? It’s not quite that straightforward. LPV requires WAAS, which has a huge amount of ground-based and satellite infrastructure. Luckily it’s distributed and fault tolerant, but hiccups are possible. This is why your GPS navigator monitors the system integrity and has integrity requirements before switching to approach mode.

GPS is somewhat susceptible to interference from space weather, such as geomagnetic storms, that affect the signal transmitted by satellites. The GPS satellites are also susceptible to damage from space debris (Have you seen Gravity?), which could impact service availability. Assuming all’s well in space, GPS is particularly sensitive to ground-based interference and purposeful jamming due to its low signal strength at the surface. To that end, the U.S. Department of Defense frequently conducts GPS jamming exercises that deny service to civil aircraft over large areas (check NOTAMS, and see “What If GPS Doesn’t?” in the May 2017 issue).

Frequency interference is also a consideration for ILS. The ILS localizer and glideslope signals originate near the approach runway, and can be affected by obstacles and aircraft that get in the way. This is why you’ll sometimes see ILS critical area markings on taxiways to avoid impact on ILS system signals, depending upon the location and type of antenna, the location of taxiways, and the types of expected operations. So if you’re told to hold short of the critical area, the pilot inbound on the approach would appreciate it if you complied to keep the ILS signal steady.

Sometimes ground interference can disrupt or distort the glideslope signal, but the perturbations are short-lived and minor enough to be damped out by the glideslope needle and are nearly transparent to the pilot. However, when a coupled approach is flown, an autopilot has no such damping and could try to chase these signal fluctuations. This often results in a wild ride that has been likened to riding a paint mixer. If this is reported by flight inspection, there will be restrictions placed on autopilot-coupled approaches below certain altitudes. As they don’t rely on local signals, LPV glideslopes do not have such limitations.

There’s a recent trend in procedure design that blends some of the topics discussed here by introducing more GPS transitions to ILS approaches. On these procedures, some or all of the transitions have a “GPS REQUIRED” note nearby and feature thestar-shaped RNAV waypoint symbol rather than theconventional triangle symbol. These designs are being introduced to enable non-WAAS GPS-equipped aircraft to transition to fly approaches with lower minimums, making it sort of a back-door LPV approach.

Not surprisingly, compared to an ILS, there’s less to consider when preparing to fly an LPV approach other than ensuring your navigation database is up to date. With an ILS you need to ensure the frequency is tuned and identified. Also if you’re navigating en route using GPS, you must remember to switch to VLOC mode to use the ILS as the source for your navigation needles or be familiar with your navigator’s auto-switching.

First, if this is your alternate, note that the LPV is not a precision approach for planning. Next, the mins might be different, dictating your choice. (For example, the Monterey, CA—KMRY—ILS 10R can go to 200 feet AGL, but the 10R LPV stops at 520.) Next, look at the missed approach procedure to see if it’s compatible with your capabilities. Also, are you comfortable with the buttonology required for the ILS?

Are there any outages? GPS Interference testing might render the LPV unavailable, or you might prefer the LPV if the ILS prohibits autopilot coupled approaches.

At the end of the flight, both ILS and LPV are perfectly acceptable approaches. So, once you’ve considered all of the unique characteristics, sources of potential trouble, and the items we’ve discussed, if no choice emerges, pick what you like.