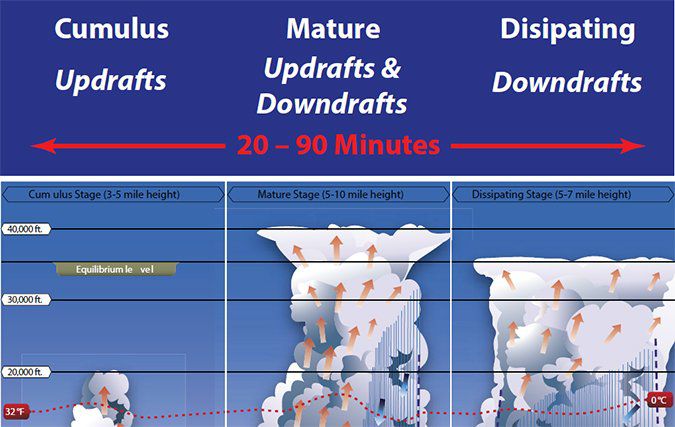 Almost 10 years ago, a well-experienced friend of mine flew a well-equipped Cessna 421 into a squall line. The airplane did not break up in the air; instead, he lost control and went straight in vertically. The impact crater was in the shape and size of the front of the airplane. The NTSB confirmed the whole plane was there by weighing the mostly unidentifiable bits that resulted.

As summertime arrives, we need to refresh ourselves on thunderstorms. The FAA’s useful textbook drawing of our fundamental adversary is shown below. Of course we rarely see the textbook example in real life but it is helpful for understanding some key features.

Note that only the mature stage, defined by rain reaching the ground, has both up and down drafts. The friction of these opposing movements builds static charges until they discharge. Often, those discharges are small and can’t be seen; it’s only the worst that we see as visible lightning and hear as thunder. Those opposing movements also result in the strongest turbulence. Thus, avoiding lightning avoids bad turbulence. Spherics devices see lightning.

Radar, on the other hand, sees precipitation. The algorithms used generally equate stronger returns with heavier precipitation from which we infer thunderstorms. Radar can be fooled by, among other things, precipitation type (hail, snow, rain, etc.) and size. Plus, heavy precip does not necessarily equate to a thunderstorm or to turbulence.

The images on the next page were taken almost simultaneously. The top shows NEXRAD with reds and yellows at 10 o’clock a few miles out. In the middle, the spherics shows nothing. The bottom is the view out the window to 10 o’clock.

Over the years, I have frequently been offered vectors or a turn by ATC because they were showing significant precipitation ahead from their radar feeds when my Stormscope was telling an entirely different story. I once had a flight along a weak tropical disturbance over the Gulf coast that had generated thunderstorms and rain all along the coast and some distance inland.

As we neared Mobile, Approach advised me that there was moderate to heavy precipitation ahead and suggested deviating north or south. The Stormscope was clear ahead but showed a little activity to the north and south so I advised Approach I would proceed straight ahead. He really got insistent and at one point asserted that my Stormscope was broken. We encountered light to moderate rain and a mostly smooth ride.

That’s not to say you should blithely charge into radar red zones with no spherics activity. Although it’s usually the turbulence in a cell that will bring you down, snow and ice can obviously cause problems and hail should always be avoided. So, you need to be aware of the precipitation type being shown on that radar image.

Also, both spherics and NEXRAD have blind spots and neither is infallible. Spherics devices can have false negatives because they don’t see those static discharges until they happen. While most cells with dangerous opposing currents also produce significant static, nature is inherently unpredictable and the static discharges can lag. Of course, the delays in getting NEXRAD images to the cockpit can lead to significant errors. Plus, radar only seeing precipitation, not turbulence, can cause difficulty interpreting the image.

You can get both radar and spherics information from ground-based sources or from onboard equipment. Onboard equipment is obviously preferred because of the timeliness of the information. Onboard weather radar, however is quite expensive and the antenna requirements generally make installation on most singles and light twins impractical. But even if those financial and physical obstacles are overcome, onboard radar is subject to a lot of interpretation errors, with masking near the top. With radar masking, the majority of the radar energy can be absorbed by nearby activity, leaving insufficient energy penetration to show what can be significant activity behind.

While there are ground-based spherics detection systems, these are generally focused on cloud-to-ground activity. Of course, we’re just as interested in the static discharges that happen within the cloud to indicate the developing turbulence. This all adds up to onboard spherics detection being a good compromise between accurate and timely information for weather avoidance, and economics.

Aviators long ago discovered that an ADF would typically point to the biggest thunderstorm around. Thus, the direction to the lightning strike was easy to know. The real cleverness came in determining how far away the strike was. Each static discharge puts out electromagnetic energy. If one could determine the energy given off by the average discharge, one could make an estimate of how far away that was by measuring the energy received at the airplane’s antenna. My apologies to Paul Ryan and Nicholas Spitzer who patented the Stormscope in 1976 for my gross oversimplification of their work.

Over the years since, engineers have greatly improved detection, but the principles remain the same. Today’s WX-500 (according to Pilot’s Guide for the Stormscope from L-3 Communications Avionics Systems, Inc.) “. . . detects the electric and magnetic fields generated by intra-cloud, inter-cloud, or cloud-to-ground electrical discharges that occur within a 200 nm radius of the aircraft and sends the resulting ‘discharge signals’ to the processor.”

The symbology of that display is important for interpretation: for the first minute after a strike is identified, a bold lightning bolt is shown; for the second minute the symbol becomes a bold plus, and for the third minute it becomes a subdued plus. The rate of strike detection is shown. In my experience, rates of 10 or less indicate a relatively benign environment; rates of 10 to 20 require serious consideration; and rates over 20 must be dealt with decisively.

Get Wet or Stay Away?

Clearly, the best operational solution is to use a combination of technologies in our aeronautical decision making, filtered through our experience and comfort. I’m generally comfortable flying through greens and yellows on NEXRAD if my Stormscope is clear, but with one giant exception. When a wide area is ripe for thunderstorms, the individual storms tend to feed on one another and grow.

The left figure at the top of the next page shows cell activity is low (Rate = 0) and more than two minutes old. The image next to it was taken only four minutes later and shows the rate has jumped to 20 with significant activity in the last minute. This shows the importance of knowing where the juicy environments are so you can be on the lookout for rapid development like this.

The figures on the bottom of the next page show how I completed a flight with a relatively smooth ride in somewhat challenging conditions. On the left is the FlightAware depiction of the completed flight from Peachtree Dekalb (PDK), in Atlanta, GA, to Headland (0J6) near Dothan, AL. I navigated to keep the image you see on the right from my Stormscope during the flight. Atlanta Approach suggested vectors for weather and I used the spherics as my “tie breaker” on the options offered. The combination of multiple technologies with experience made for a safe and comfortable flight.

Interestingly, a year before I’d ferried a plane from Asheville, NC to Panama City, FL. The weather was similar but the plane had no spherics information. Atlanta Approach did the best they could, but the radar was so cluttered with rain it was difficult to pick a safe route, much less the best one. I really felt naked without spherics information.

Each situation is different and I weigh the comfort and experience level of my passengers against the potential for serious weather. If I’m alone or with another pilot, I am willing to tolerate more turbulence and will get closer to the weather, penetrating some areas that I’d avoid with a nervous passenger.

Days in advance, I prepare by watching the weather patterns and getting a notion of the environment to be expected. We should never be surprised by a squall line or a hot, juicy air mass. If the trip yields VMC, I’ll just head out. However, even on VMC days, an occasional cell or buildup can require a deviation. I avoid them all and just tell ATC I’m deviating.

More caution is needed in IMC. First, avoid squall lines. Period. Otherwise, I take advantage of the spheric device’s 200 NM range to make strategic decisions. Remember the 60:1 rule. Each degree of course change yields a mile offset in 60 miles. Use this to deviate around cells while they are still well out in front.

ATC calls of heavy and extreme precip will come when you are much closer and will require larger heading changes to avoid. Compare what ATC is telling you with what you’re seeing and experiencing, adding your own data from onboard or ground-based sources. Use all the information available to choose the safest course of action, including making a decision to land and wait things out.

Thunderstorms can hurt you. I would like to believe that all instrument pilots are a bit cautious. If you are like me, I nibbled at cloud flying a little at a time and over the years have become comfortable with flying in many—but definitely not all—types of weather. I don’t do ice and I don’t do lightning. The fact that I live and fly in the southeast U.S. means that I see a lot of convective activity.

I was also fortunate to have a great flying buddy and mentor, Mike Scroggins, who provided me with a lot of spherics practical in-flight knowledge. I reflect from time to time about the fact that in the “good old days” unpressurized DC-3s and DC-4s of Delta and Eastern Airlines plied these same skies at the same altitudes I do on a regular basis. Back then, the common greeting when you went to pick someone up at the airport was, “How was the flight?” The expectation was that it had been bumpy to a greater or lesser extent—but safe.

The guys up front had no spherics (other than their ADF), no NEXRAD, and no ATC guidance, but they knew the weather, how to read weather reports and forecasts, and how to go around the worst of it. But bumpy was sort of expected.

My thinking now is that if you want smooth, then stay out of the green on NEXRAD; if you want to stay out of thunderstorms, but don’t mind a few bumps and rain, make sure you are using spherics information. To get used to precipitation bumps, plan to fly at least a part of your next hot humid flight below the haze line and/or below the fair weather cumulus. You’ll certainly get bumps there, and no rain or thunderstorms.

Bill Castlen is a Master CFII, FAA Master Pilot, Cirrus CSIP, and continues to enjoy getting his SR-22 wet as often as possible via Flying, Food, and Fellowship.