Scenic trips over the mountains out west often require creative flight planning. The smaller the aircraft, the more “scenic” the trip. That’s the whole point, so not worrying about how long it takes to make the final destination goes a long way to lighten the risk burden. Then, go in good weather to enjoy the scenery and the lack of clouds, storms, ice, and turbulence. But a flight like this can still be a handful, starting with the preparation.

From Pueblo, Colorado, you’re planning an early-summer holiday to Page, Arizona, on the way to a conference in Las Vegas. Page lies just north of the Grand Canyon special-use airspace. Two days out from departure, the forecast at Page is for southeast winds, partly cloudy with marginal VFR conditions. It’ll be severe clear most of the way there. So the bigger tasks are finding routes with feasible altitudes and full-service airports right on the way. Two things work in your favor: There’s an oxygen system in your Cirrus SR20 and you’re experienced with higher elevations like Pueblo (4729 feet). However, two things count against you: It’s a normally aspirated aircraft, and this is your first warm-weather season flying it.

To that end, your ideal route from KPUB is FSHER V244 HVE V208 PGA … with a backup fuel stop in Montrose, Colorado. It’s right on Victor 244 and about a third of the way to Page. You wanted AXGEX in the flight plan, 47 miles from PGA, as a cue to leave the airway and fly direct to the RASCO initial fix for a smooth intercept with no procedure turn. But, the 16,000-foot MEA on V244, and mountains—the big kind—require climb abilities beyond what you’re willing or able to do. The scenic route, then. The southern route now has two segments with a fuel stop at Farmington, New Mexico: PUB V83 ALS V368 RSK FULLY V210 TBC V208 PGA

Now the MEAs are no higher than 13,000 feet on the first leg, so you file for 14,000. If weather or winds get in the way, you can ask ATC for wrong direction at 13,000. While still not ideal, this route crosses the mountain range where it’s lower to the south, skirts the MOAs there and goes right by several airports for emergency use.

The second leg will hop back onto the airway, cruising at 12,000 feet, then 10,000 on the final swing northbound to Page. That’s good, but it’s also a remote area lacking airports other than the VFR-only Tuba City. Plan B, then, is to divert to Grand Canyon National Park (KGCN) if there are any concerns about continuing north (along the amazing Kaibito Plateau) to Page. Plan C, if nearing Page, is the filed alternate at Kanab, Utah, about 52 NM west.

A weather check an hour before departure shows conditions are as expected—clear with light east winds until Tuba City, then a layer of scattered clouds at 2000 feet extending well past Page. The winds aloft are still light enough to fly the whole trip in 3.5 hours with about two hours’ reserve. Normally, that’d make it a nonstop flight, but given the sparse alternates and remote terrain, you plan to top off at Farmington.

Everything goes as planned until an hour from Page, where a new report shows a scattered layer there at 1200 feet. You’ll still expect a visual approach clearance backed up with the RNAV Rwy 15 using the LPV glidepath for safety. You’ll make a continue/abort decision 100 feet above the DA of 4599 feet, with a pre-landing check (runway clear; speed, track and altitude all on target). In case of a go around or miss, fly the published missed approach, or use left traffic and circle back to Runway 15. Or, cancel IFR below the clouds and land straight-in or circle.

You consider cancelling 500 feet below the clouds and committing to the VFR pattern, but decide staying IFR is best. That makes the published missed approach the first option: “Climb to 9000 direct FAPOV and via 155-degree track to AROGE and hold, continue climb-in-hold to 9000.” The plan view doesn’t depict this well, so estimate the distance from KPGA (airport GPS center) to FAPOV; it’s 1.6 NM, then another 8.1 NM to AROGE. Wondering if you’ll make 9000 feet by AROGE? Assume a worst-case go-around that starts at 4599 feet. That’s a climbout gaining 4401 feet over 9.7 miles, 454 feet per NM.

Doesn’t seem safe to eyeball this climbout, so refer to the POH En-Route Climb Gradient table for the lighter weight of 2500 pounds. At 20 degrees C, 4000 feet pressure altitude, the climb gradient is 516 feet per NM. Assuming a groundspeed of 80 knots, the Rate of Climb table shows 858 fpm. “En Route” climbs are with flaps up, so for comparison, find the “Takeoff Rate of Climb” table using 50 percent flaps. For the same conditions, it’s 888 fpm. Looks good, but … that might not be the reality. While the altimeter settings will be a tad above standard, you’ll want to round this up to 5000 feet pressure altitude and account for decreasing climb rates to 10,000 feet PA. 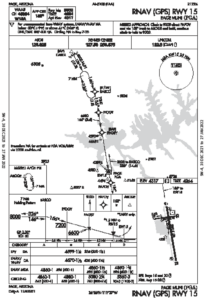 But there’s a catch: The performance numbers blank out above 10,000 feet/0 degrees. For reference, takeoff configuration at 8000 feet and 20 degrees shows 627 fpm, so it’s clear that performance decays rapidly. Then, “For operation in air warmer than this table provides, use extreme caution.” So that climb-in-hold to achieve 9000 feet over AROGE could save the missed approach, but maybe you won’t want to use flaps and a higher climb angle beyond the initial phase due to excess engine heat, so assume a shallower, no-flap climb. At 516 feet per NM, the aircraft will reach 5632 feet MSL at 2 NM (just past FAPOV). Assuming a degraded climb after that to 337 feet per NM/595 feet per minute, you’ll reach about 8300 feet over eight miles. That’s close to the target altitude, so by the time you fly the parallel entry, you should be at 9000. But that puts you nearly ten miles away from the airport, which out there is the middle of nowhere.

You haven’t considered the VOR-B. Who does? But on a quick glance you noticed that its final course is 147 degrees and ends at the on-field Page VOR/DME, right by the runway. The circling MDA is 5200 feet, close to pattern altitude. But it’s the missed approach that piques your interest: “Climb on the PGA R-162 to 6000, then climbing right turn to 7000 direct PGA VOR/DME and hold.” That’s a much lower holding altitude, with the bonus of staying right over the airport. That’s worth a closer look.

If you leave the VOR-B MDA of 5200 feet for landing and happen to get as low as 4600 feet and something (like wildlife on the runway) requires a go-around, assume a climb gradient of 516 feet per NM. That will get you just past 6000 feet (by the book, 6148) within three miles, and nearly 7200 feet (7180) within five miles. Looks like a climbing right turn can happen about three miles out, allowing you to reach 7000 feet before the navaid. (Note that this maneuver is similar to the Obstacle Departure Procedure for Runway 15, which includes the same holding pattern to climb over the airport.)

You briefly consider requesting the RNAV 15 with an alternate missed procedure to use the VOR-B’s missed approach. The odds of needing this are low, but at the same time it’s a bit messy for an unknown airport in unfamiliar terrain. The two approaches have different minimums, courses and missed approach points. And if you lose comms, well, it can get messy. So officially, navigate on the VOR-B with the number two CDI while using the digital needle on the GPS to monitor the track. If there are any doubts about flying the instrument missed, the clouds are high enough to fly the pattern for landing.

Coming in from the south, you fly the procedure turn, catch the inbound, and the clouds surround you after leaving 6700 feet. Descending through 5500 feet, you’re just below them and the runway’s in view a good three miles out. Perhaps a bigger, faster aircraft couldn’t achieve the straight-in, but your smaller, slower aircraft with full flaps scores a point here. For this trip, the scenic route was exactly that. And because you took the time for backup plans, you were able to enjoy it. 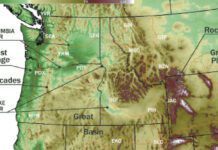 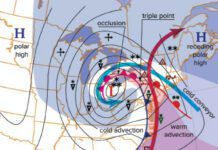