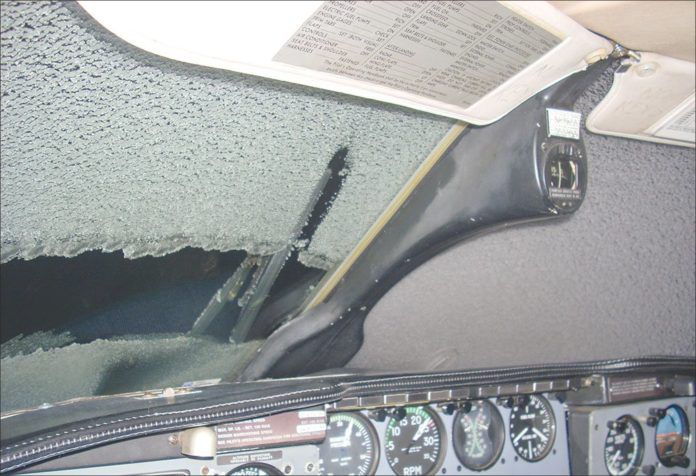 Winter may be over, but you’re not out of the woods just yet. Spring weather presents some unique icing challenges that pilots should anticipate.

My first winter of cargo flying meant dealing with ice every night. With spring came a sigh of relief that I could finally relax a bit. Boy was that wrong. Instead, I learned that although the temperatures may be warming up, the threat of icing remains throughout much of spring.

The first hint that I might have been a bit premature was during an early spring flight from Birmingham, Ala., to New Orleans, La., after a strong cold front had passed the night before. To my surprise, I picked up moderate, clear ice until I was able to break out on top. Winter was over, and it doesn’t even get that cold on the Gulf Coast. How did this happen?

Springtime is the moody adolescence of weather; it doesn’t know what it wants to be when it grows up. Sometimes it has full-blown thunderstorms, sometimes it’s cold and icy and sometimes it’s just blustery without substance. It can even do all three in the same day. This mercurial attitude makes it difficult for pilots to prepare for the potential weather of the day’s flight.

Full-Frontal Flying
Combine increased solar radiation heating the surface with an active polar jet stream bringing cold air from the northern latitudes and you get a sharper difference between surface and upper-level temperatures than in winter or summer. This makes the atmosphere increasingly unstable. Mix in some moist Pacific or Gulf air with that instability and you’ve got the recipe for nasty icing and convective activity.

If flying a non-icing equipped aircraft in cooler weather, you may need to delay or cancel the flight. But when the decision is made to cross a front at any time of the year, the best strategy is to minimize the time spent along the frontal surface by crossing it perpendicularly. That’s easy if you’re flying directly through the front, but if your course takes you generally along the front, it requires a little more planning and perhaps a course adjustment.

Cold Logic
Cold fronts typically have the steepest frontal slope of all the types of fronts which—when combined with the large temperature gradient between air masses in the spring and the moisture brought from the south—frequently causes deep lifting of the moist air. The most obvious result is thunderstorms along the cold front, but a good chance of clear ice in the clouds exists even in the absence of developed storms, as I discovered climbing out of Birmingham.

Think ice any time you see vertically developed cumulus clouds when the outside temperature is between zero and -15 degrees C. Most of the ice will be found toward the tops of the clouds, so try not to hang out there if you can avoid it. In strongly convective clouds, the potential for supercooled liquid droplets (SLD) exists. If you observe droplets running behind the boots before freezing, take immediate action.

There is also a slight chance for freezing rain behind the surface front where the warm air lies over the cold air. Due to the steep frontal slope, the area where the conditions are conducive to freezing rain is narrow. However the frontal slope of a cold front is proportional to the speed it’s moving, the slower the front, the shallower the slope and the wider area of potential freezing rain. The only good thing about cold fronts is that they usually pass quickly, and conditions generally improve rapidly with passage.

Ice and the Warm Front
Cold fronts often get most of the attention paid to frontal systems because of their association with dramatic thunderstorms. However, warm fronts can affect the weather for hundreds of miles. That means widespread precipitation, IFR conditions, icing and potentially freezing rain across large parts of the country.

The surface analysis chart depicts the surface location of the warm front, but the frontal surface reaches ahead with a slope much shallower than a cold front. A flight approaching a warm front from the cool side would observe high clouds parallel to the front, which solidify and descend as you get closer to the frontal surface. Soon you’ll be flying right into a mess of nastiness, precipitation will begin and you’ll need a plan.

The area beneath the frontal surface is the most frequent location to encounter freezing rain, which is bad news. If you do run into freezing rain, you’ll know there’s warmer air above you, so it’s usually wise to climb while you can.

On the other hand, if you encounter sleet, you’ll know there’s freezing rain above you, and that you’ll probably run into it as you approach the frontal slope. Once you enter the clouds and cross the frontal slope, you’re likely to start picking up rime or mixed ice.

If you find yourself in the nasty middle where there’s warm-front icing, you can either stick it out at your present altitude and wait for it to improve, or climb and hope it gets too cold for ice. Ideally you want to hold off descending until you pass the surface front so you don’t continue to slog through the worst ice along the frontal slope—especially if you’re going from cold side to warm side. But what if your destination lies out in front of a warm front?

When the temperature at altitude is quite a bit higher than what’s being reported at your destination, start planning for a potential freezing-rain encounter on approach. Freezing rain at the surface requires a particular atmosphere profile that thankfully isn’t terribly common, but that also makes it difficult to forecast with precision. I’ve only encountered freezing rain on approach once, but it’s an experience I’m in no hurry to repeat.

Know What to Expect
A front stretching across your route necessitates a more thorough analysis of the weather than usual, because flying through a front could range from a mostly non-event to a serious ice problem, depending on the temperature, moisture and stability ahead and behind the front. Even if your course doesn’t have you crossing a front, distant fronts may still have an effect on the weather for your flight.

The National Weather Service’s short-range forecast discussion is a good place to start when you have a flight coming up. It’s a semi-technical discussion of large-scale weather processes affecting the country over the following two days, which helps explain the causes and interactions of the features you see on the surface analysis chart.

When analyzing the weather, think about where the air along your proposed route is coming from. This will tell you its general temperature and moisture characteristics, as well as give insight into its stability (consider time of day as well). Winds/temperatures aloft charts at the 500mb level show the general flow of air across the country without surface interference and allow you to see the vertical profile of temperatures.

Looking at the current and forecast freezing-level charts is necessary for any springtime IFR flight. With all the atmospheric churning going on at this time of the year, freezing levels can change dramatically over a short period of time. This can be combined with your estimation of the air’s moisture content to give you an idea of the potential for ice in the clouds. Infrared satellite imagery will show you the extent of clouds and their relative tops (based on the temperature) to estimate the air’s stability.

Once you’re in the air, your eyes and ears are your best tools. Watch the outside temps and, if you can, wind directions to mentally track where you are in relation to the frontal boundary at your altitude. Listen on center frequencies for reports of ice and turbulence.

Weather radar can help by showing precipitation associated with fronts, but isn’t very good at showing ice. Alternatively, radar returns can also alert you to a probable lack of ice, as the radar is reflecting nicely off liquid water … so long as it’s not supercooled. A sub-zero airframe flying through liquid water can also be an issue.

Avoid Surprises
A preflight study of the factors affecting the atmosphere, combined with the ability to interpret what’s shown, will go a long way toward avoiding surprises in the air. Just remember that these products have a short shelf life when used for tactical planning (NOAA issues a surface analysis every three hours), so look at their issue times before relying on them.

In a properly equipped aircraft with a sufficiently prepared pilot, flying through and near fronts is certainly do-able, and just part of the job. In my freight days, occasionally I would pull the short straw and have the miserable luck of crossing a front, only to watch it catch up and pass me as I waited for my next load of freight to arrive, at which point I had to take off and do it all over again. In some jobs, you just don’t get to enjoy a sigh of relief for long.
Lee Smith is a corporate pilot and tries to avoid making the airplane resemble a snow cone.