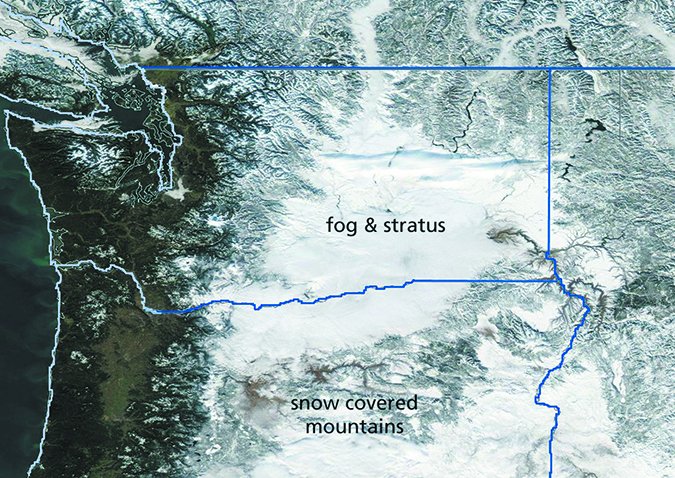 November in the U.S. means the risks from thunderstorms have disappeared everywhere except the Gulf Coast region as a new set of problems emerge, from icing to turbulence to low clouds, fog, and high winds. A breakdown of accident statistics helps tell us where to focus our attention first.

Using a 2003-2007 study, we find that where weather was a cause or contributing factor, low ceilings and visibility were the #2 factors, involved in 18 percent of all weather-related accidents. Most of this involved continued VFR flight into IMC, which shouldn’t be a factor for instrument-rated pilots. Other weather-related causes were a wide assortment of factors from lightning, icing, and turbulence to carb icing, high density altitude, and wind shear. But only high winds and crosswinds exceeded the threat posed by low ceilings and visibility.

That takes us to the territory of seasoned IFR pilots—Part 135 (commuter and charter) operations. Out of 128 accidents where weather was a factor, low ceilings and visibility ranked as the single most significant element—a factor in 36 percent. This soars way above the results for Part 121 operators, which cited low ceilings and fog in only one percent of accidents. Some thoughts about that disparity are that charters operate into a wider variety of small and unattended airports, with less equipment and training than the airlines and these airports are often unfamiliar to the crews.

Ceiling is defined as the height of the lowest cloud base that covers more than half of the sky. Lower cloud layers do contribute to the total. So if exactly half of the sky is covered by stratus at 1000 feet with the rest covered by stratocumulus at 2500 feet, the ceiling is 2500 feet because the stratus doesn’t cover more than half of the sky, but the higher layer takes the total over half. So don’t always rule out the lower SCT layers you see on METAR reports. They can be quite significant, really interfering with your approach.

Since the late 1990s, most ceilings in the United States are measured by a computer using a laser-beam ceilometer. The drawback is that ceiling is obtained only in a vertical column above the station and depends on progressive movement of cloud layers for an accurate picture of the layers. If winds aloft are weak, the chance of errors goes up significantly because cloud layers are not moving over the ceilometer and can be missed by the computer. So always be prepared for possible ASOS errors. If time permits, look for consistency by looking at the ceilings at nearby stations.

At most airfields around the world, and even still a few in the US, human observers report ceiling. Laser beam ceilometer readouts are still the primary source of data, but observers must go outside to assess the entire sky and see whether the ceilometer readout represents the actual ceiling or not. This requires expertise.

Quite often, ceiling height has to be estimated, especially in developing countries where no ceilometer exists. This procedure was actually common in the U.S. until the late 1990s. A good observer can come within about 20 percent of the actual ceiling by paying attention to PIREPs, reading soundings, and monitoring the ceilometer between observations. But human error also enters the picture; observers sometimes slack off. So it’s good to ask seasoned pilots in the area about the quality of the weather observations, especially when you’re planning an international trip. Expect to hear that they’re terrible, but if you get different information or more details, that’s the time to pay special attention.

At staffed stations, visibility is directly measured and a reference chart is kept showing objects and distances to all of them. At automated stations, a special instrument measures transparency by using a xenon bulb to create a flash of light, and a sensor detects how much light is reflected back. This only takes place within a zone of about one square meter, so it’s important to remember that ASOS does not detect visibility on the runway or around the airfield. Always use RVR readings when they’re available. Clearly, when you’re uncertain, it’s best to solicit information from other pilots or even the local Unicom.

Fog is essentially a cloud based at the ground. When you’re up in the air, it poses no special problems as it’s just like flying in a cloud; all the same rules apply. But of course it significantly affects operations close to the ground—either on approach or departure.

But we can’t forget ground operations where heavy fog raises the risk of an accident enormously, because of the potential for pilots to get disoriented while taxiing and for controllers without ground radar to keep track of which aircraft is where. All pilots should watch the chilling case of United Airlines flight 1448 on YouTube where a fatal accident was avoided by seconds at a fog-shrouded airport in Rhode Island in 1999. Patience and caution are essential in these conditions.

We need to know where fog comes from and how it develops. Fog is made up of microscopic water droplets that condense as the relative humidity approaches 100 percent. We say “approaches” because depending on what nuclei are available, fog can develop at a much lower humidity value. Sulfur dioxide from industrial sources is a common nucleus for fog formation. Don’t simply expect fog to form when the temperature equals the dewpoint; anytime it’s within 5 degrees Celsius, there is the potential for fog.

The most well-known type of fog is radiation fog. All that’s needed is a wet ground, clear skies, very light wind, and a nighttime sky. Heat in the air mass radiates away, increasing relative humidity and allowing condensation to develop. This will almost always form fog by dawn.

It’s also good to know the processes that interfere with this. These include strong winds (nothing forms or fog is lifted into stratus), calm wind (fog tends to settle out as dew), cloud cover to trap heat, a change in air mass, or drying of the ground.

This type of fog can happen anywhere in the U.S. but is rare in the desert Southwest. It almost always breaks up by midday, but sometimes it can become trapped in sheltered valleys during the winter months, particularly in the San Joaquin and Columbia valleys, and in the higher valleys of the Great Basin and Rockies.

Sometimes fog simply advects from one place to another. This often happens in places like the California coast, Puget Sound, and the Gulf of Mexico coast, where fog has formed in humid air and moves over cool ocean currents. All that’s needed is a wind of about 10-15 knots or more to advect it in. By advection, we mean that almost everything is physically moved: temperatures, moisture, pollen, haze, smoke, stray mosquitoes, and anything else that is in the air parcels being moved. This is called advection fog. Expect to see it sometimes when flying to places along the Gulf Coast or the West Coast.

Fog may also develop in upslope flow on rising terrain and mountains from forced lifting and adiabatic cooling. DEN, ICT, and LBF are some terminals where this regularly happens. Fog also develops when very moist air moves across cold, chilled ground, which occasionally happens in the southern United States at terminals like DFW, IAH, LIT, and MEM in the late fall and winter. Unlike radiation fog, this latter type of fog is often capped by overlying stratus and higher cloud layers, and it persists all day.

Low clouds don’t pose a threat to ground operations, but high cockpit workloads and the lack of visual reference astronomically increases the chance of a collision with obstructions or terrain, and sometimes with other aircraft.

The lowest layers of cloud are the most dangerous, and form from all of the same factors as fog. The difference is the fog “lifts” over either time or distance to form a stratus overcast. Also upslope flow may manifest itself as low clouds rather than fog when dry air is present at the surface. Other factors that produce low clouds include forced ascent like “isentropic lift,” which is beyond the scope of this article but can be thought of as “overrunning” of an air mass over frontal boundaries.

It follows that the greatest risk of low clouds is along coastal areas, especially when there is onshore flow, and in and around mountains when winds are blowing upslope or across the mountains. Isentropic lift is very common in the Great Lakes region, Midwest, and Northeast US, and this increases the chance of low cloud layers here, too.

A battle plan for fog is guided by geography and weather patterns. This gives us a conceptual model to work from and a general idea of how the fog events progress. By comparing that to the current weather situation, we will know what to expect. First identify if the current IMC is widespread or isolated.

Conversely, radiation fog tends to be patchy or isolated. So when skies are clear and winds are light, a near-by alternate often works. In rare cases, especially with Western U.S. valley fog, the IMC regions can be rather widespread. Selecting an airfield at a higher elevation will usually get you out of the fog and into VMC.

With advection fog, your alternates should be downwind. For example, if you’re flying to Lafayette and the TAFs are indicating southerly flow and visibilities dropping, try Alexandria or Monroe, even though going to New Orleans and hitting the French Quarter sounds like fun. Although coastal airports may indicate better visibility, advection fog is often a regional problem and those coastal sites are at risk of quickly going downhill.

Always get a weather briefing. There might be all the products you need on the Internet, but keep in mind that the weather briefers on the other end of the phone have already been spending hours watching conditions in their area and consulting with National Weather Service forecasters. They also have special tools like multispectral satellite imagery that you don’t have on the Internet. So that saves you time by leaving the heavy lifting to them.

Keep in mind that what you see is not necessarily what you will get. Pilots often pull up the METAR at their destination right before taxiing out, and might see 7SM and SCT250, and assume things will be fine. Patterns change rapidly during the winter months in North America, and some fronts in January have been measured at speeds of up to 60 mph. TAF amendments are commonplace; so have a plan for keeping up to date with the weather, have a well-thought out set of alternates ready, and know the big weather picture.

And always try to learn more. Situational awareness means not only observing what’s going on around you but understanding how it all connects. This means not only being alert but being a bit of an expert of all aspects of aviation, from ATC to mechanical and electronic knowledge to meteorology itself.

In this WX SMARTS column, I (as a former aviation weather briefer) share with you the problems and concerns we deal with on the other side of the phone and help show you the areas to focus on. Keeping a copy of FAA aviation weather publications or other aviation books on hand and trying to catch up on a few pages every few days as time permits is probably the easiest way to build your expertise. It leverages repetition, meaning that after a year, you’ll have a few hundred pages of study under your belt. This is an easy path to building your expertise.

Tim Vasquez is a professional meteorologist living in Palestine, Texas. See his web page at WeatherGraphics.com.