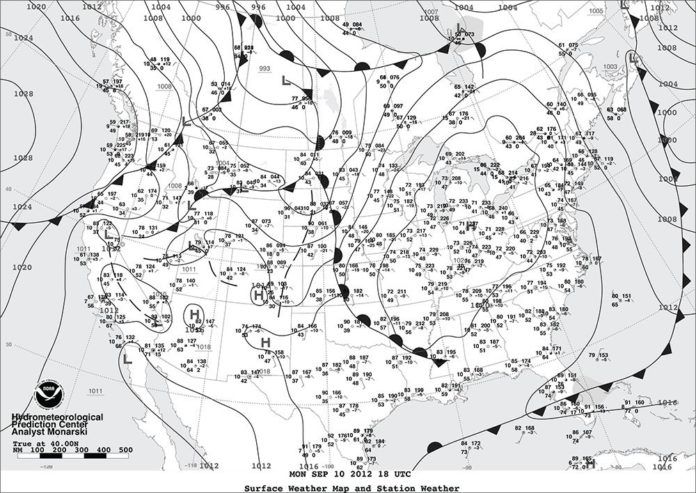 We’re not talking about the anxiety of a slam-dunk vector. The subtleties of the mundane altimeter setting really matter—especially for IFR in the high hills.
Of all of the weather elements measured by sensors located at airports, atmospheric pressure is perhaps the most important—and the least appreciated—for IFR pilots. Without it, pilots have no way to establish their height above the earth’s surface with real certainty.

Consequently, the pressure sensor is the most reliable and accurate sensor in the array. So you can bet that this equipment is checked for accuracy carefully and often. But that’s only the beginning of the story.

What’s in a Number?
There are several ways to represent the surface pressure. Let’s start with what’s actually measured at weather stations, that is, atmospheric pressure or what’s referred to as “station pressure.”

For the ASOS, there are three pressure sensors located at most towered airports (usually located inside a climate-controlled structure, such as the Tower). Six pressure readings are taken per minute by each sensor to determine what’s called the “one-minute pressure.”

The exact accuracy check depends on the setup, but in general, if any of the six readings are missing, or if there’s a discrepancy detected of more than 0.04-inches, then the pressure value is set to “missing” and the maintenance check indicator (a “$” in the remarks section) is appended to all subsequent METARs. Given this redundancy, it’s virtually impossible to get a faulty reading.

This measurement may be accurate and reliable, but it’s quite useless by itself. Because air pressure decreases rather rapidly with increasing height, if we were to plot the actual reported station pressures at a specific time over the United States, what we’d see is a relief map of the terrain, with lower pressures always at higher elevations.

This isn’t practical for analyzing the surface weather patterns or flying from one part of the country to another at consistent altitude, so we need to correct all readings to a common altitude of zero MSL. There are two methods for achieving this: The first is the altimeter setting all pilots know and love, and the second is referred to as a “reduction to sea level pressure (SLP).”

The Number in the Box
Altimeter setting is what you get on a briefing and from AWOS, ASOS or ATIS. According to Chapter 11 of the Federal Meteorological Handbook, the altimeter setting is defined as, “The pressure value to which an aircraft altimeter scale is set so that it will indicate the altitude above mean sea level of an aircraft on the ground at the location for which the value was determined.” While this definition is accurate, it leaves out some important details, as you’ll see shortly.

The altimeter setting is calculated by a pressure-reduction computation in accordance with the International Standard Atmosphere (ISA). Consequently, the altimeter setting has no temperature dependence. It’s simply a fancy formula to try and guess what the air-pressure measurement would be if we could dig a big hole in the ground and move the airport down to sea level elevation.

Similarly, SLP is a theoretical pressure as if the station were actually at sea level. The two computations are somewhat different in that the SLP computation does not assume a standard atmosphere; instead, the computation takes into account the reported station temperature. In fact, it uses a 12-hour mean ambient temperature computed once each minute from the current and five-minute average temperatures reported over the previous 12-hours. An average temperature is used to reduce any diurnal effects.

Compared to the high degree of accuracy of the measured station pressure, computing these two theoretical pressures is actually quite crude. In addition, bad assumptions as to what the temperature profile should look like “below the ground” can result in errors in either of these calculations—especially so in regions of sharp terrain.

What, Me Worry?
The factor used to reduce station pressures to altimeter settings contains an exponential term in it that, in turn, depends on the station elevation and hence can get fairly large rather quickly for high-elevation stations. Let’s crunch some specific numbers.

Leadville, Colo., is the highest incorporated city in the United States at 9928 feet. Here, the absolute station pressure measured at the site is normally around 700 mb, or 20.67 in. Hg. If the average sea-level pressure is 1000 mb, this means that nearly 300 mb must be added to obtain a reading at sea level. A mere one-percent error in estimating the exact correction would result in a 3-mb error in SLP. The potential errors in the altimeter setting are larger for stations at high elevations because more correction must be applied.

You might be asking, “Will this apparent ‘error’ cause me to hit anything solid?” Probably not, so long as you’re using the right altimeter setting at the right time. There are issues where very cold days require some additional correction, but we rarely see this in the continental U.S.

However, there is a catch if you’re using a local altimeter while en route.

Suppose you’re flying VFR and pull up the closest altimeter setting from Copper Mountain in central Colorado, which has an elevation of 12,073 feet (it shows up like an airport, KCCU). ATC for that area might be using Eagle, Colo., just 40 miles to the west, with an elevation of 6547 feet. That may put you off by nearly 500 feet from other traffic. Your VFR flight at 16,500 feet and their IFR flight at 16,000 would be at exactly the same physical altitude.

The point here is to get the right setting for your phase of flight: ATC’s setting while en route and the local setting for arrival and departure from specific airports. The issues in correction usually don’t show when you’re at a specific airport because the altimeter in your aircraft also assumes a standard atmosphere and is designed to perform all of the same calculations (either mechanically or digitally) as the ASOS.

You may find, however, as you are switching to or from the Leadville altimeter setting to the new setting provided by ATC, that you are doing quite a bit of twisting of the Kollsman knob.

Rising pressure with altitude?
Even if you routinely fly in designated mountainous areas such as the Rockies, you probably haven’t noticed that altimeter settings can vary quite a bit even when the general pressure gradient throughout the area is rather weak. On an early August day, there was an area of high pressure in west-central Colorado. All of the surface stations in this region were reporting sea level pressures ranging from 1023 to 1017 mb. Not a terribly large pressure gradient between stations. But the altimeter settings at these stations varied from 30.35 to 30.82.The altimeter setting at Eagle, Colo., (6539 feet) was

Below is a graphical depiction of the surface observations for the sites. If you are familiar with the topography, it’s hard to miss the obvious connection between station elevation and altimeter setting. Copper Mountain (KCCU) and Leadville (KLXV) located in the center of this image, are the highest elevation sites shown. Notice they also, they have the highest altimeter settings.
Given that there are multiple pressure sensors that must agree at each station and that these sensors are calibrated several times each year, what you’re seeing is an artifact of the reduction-to-sea-level method used to compute the altimeter setting. —S.D.

Altimeter setting reflex: Beneficial if not Blind
When ATC says, “Altimeter 29.96,” your hand immediately leaps toward the knob, despite what other important tasks you may be performing at the time. It’s not really a bad habit given that the altimeter setting is one of the most important single pieces of data you’ll need on every flight.

The importance of properly setting the altimeter cannot be overemphasized. Forgetting to change from 29.82 to 29.92 gives you a 100-foot error. Many instrument approaches have little margin for error, especially when the approach terminates with a circle-to-land.

While there isn’t a right time to switch from the last ATC-delivered altimeter setting to the local altimeter setting at your destination airport, you certainly don’t want to be descending on the approach listening to the weather broadcast to get it. At the other extreme, you don’t want to change it too soon while still at your cruise altitude and 50 miles away from your destination.

Here’s some perspective: If the altimeter setting at your destination airport is less than 0.10 from your current setting (and it usually is), it really doesn’t matter all that much when you switch it.

I almost always switch the altimeter setting as I listen to the ground-to-air broadcast. Shortly after that I negotiate the approach I want with ATC and have already started my descent. I make it a habit of writing it down from the ground-to-air broadcast and ordinarily recheck the altimeter setting right after the approach clearance is given, even if that’s for a visual.

Is it acceptable to use your datalink weather in the place of ATIS, AWOS or ASOS? Probably. But, a word of caution: Always verify the issuance time on the surface observation before using the altimeter setting in the METAR. Even though METARs get updated quite frequently (every 12 minutes with XM-delivered satellite weather), the surface observation could be an hour or more old as it appears on your display. A stale altimeter setting is not going to be an issue when you are hearing it directly from the horse’s mouth. —S.D.

Scott Dennstaedt has logged time with the National Weather Services as well as in the cockpit. His website is avwxworkshops.com.