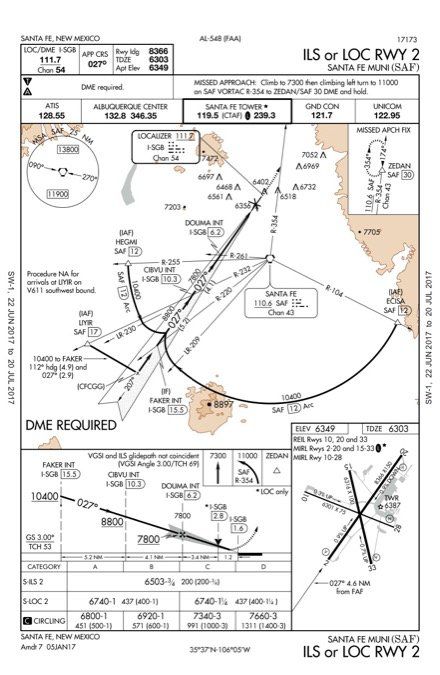 The standard ILS approach is kind of a seen-one-seen-’em-all situation. Sure, the numbers vary from one to the other, but the technique is rather straightforward and they’re all mostly the same. All you have to do is get established on the localizer, usually with a few turns from your friendly controller, wait for the glideslope needle to come in and then just follow them both to the runway. And, that’s just about all there is to it. Until there’s more…

There are a couple points I want to emphasize here that we typically don’t think much about. October’s Killer Quiz touched on this but it’s worth a bit more ink. First, I don’t want you to probe too deeply into how I know these little gems. Just accept it on faith that, well, um, this first one was carefully explained to me. Ah, over the radio. The second came to me in one of those all-too-common, “Uh-oh, now what?” flashes of brilliance that serve to keep us alive in spite of our best efforts to the contrary.

For weeks, you’ve been salivating for that green chili that you can only seem to get in New Mexico. You’re finally headed to Santa Fe for your green-chili fix. You’ve been cruising along in the low teens on a course of 040 degrees that’ll take you direct to KSAF. It’s a cold, winter day, but the air is smooth with some crud below.

After reporting the rapidly falling altimeter of 29.84, the ATIS is warning you that the winds and the low schmutz covering the airport are going to require you to fly the ILS to Runway 2. You happily program it all into the magic wonder box, brief the approach while comfortably still at cruise, and you sit back waiting for just another ILS. No problem.

You get the expected clearance, “Turn right, heading 050. Intercept the localizer. Cross FAKER at or above 10,400. Cleared for the ILS Runway 2 approach.” You acknowledge the clearance, turn, and begin a gradual descent from 13,000 feet. There’s no need to be in a hurry to descend since this is all pretty high anyway. Next, you set up the autopilot for the intercept and take the final steps with the navigator. You’re good to go.

It was a perfect vector and you’ve timed your descent just right. You intercept the localizer a few miles outside FAKER. During the turn to intercept, as you’re descending through 11,000 feet, the glideslope needle comes in and the autopilot captures it all. You smile at how well this worked out, as usual, and relax a bit as George flies the approach. All you’ve got to do now is finish configuring, call the tower, and watch for the runway. Uh, not quite.

High to Low, Look Out Below

You remember the old expression warning you that if you fly into an area of lower pressure without resetting your altimeter, it’ll read higher than you actually are. What you might not remember is that the same is true of temperature:—colder temperatures make our altimeters read higher than we actually are. Do you yet see why this is all relevant for our approach into Santa Fe?

Look at the approach profile view. Like most approaches, this one has a couple stepdowns outside the FAF, notably FAKER at or above 10,400 feet and CIBVU at or above 8800 feet. But, we reasoned, since we intercepted the glideslope out past FAKER, we’re safe. Uh, not necessarily.

While those stepdowns are typically no higher than the on-glideslope altitude at that fix, the design criteria are not necessarily as broad as the actual conditions that you might encounter. You might have noticed that the FAA is now including cold-weather adjustments to some stepdown altitudes and minimums on some approaches. But, cold weather actually affects all approaches, not just the ones the FAA has adjusted.

So, with the cold weather on this approach, exacerbated by chasing a rapidly falling altimeter, riding the glideslope through FAKER and CIBVU might well cause you to innocently bust those altitudes. The takeaway here is that just because you’re on the glideslope outside the FAF doesn’t mean you’ll make the stepdown altitudes.

You simply have to watch your altitude as you approach the fixes and, if it looks like you’ll be close to busting the altitude, just punch off the autopilot and “hop” over the fix. It shouldn’t take much more than a slight vertical deviation and, if you just use existing energy, you’ll be nearly stable again, probably on glideslope, after your “hop.” Reengage the autopilot and watch for the next stepdown.

Say you have no autopilot, so to safely get past FAKER and CIBVU, you’ve just been flying a modified dive-n-drive. You’re now inside the FAF hoping to get established on the glideslope. (Pop quiz: What’s the final approach fix? If you said it’s DOUMA—bizzap!—you’re wrong. DOUMA is the FAF on the localizer approach. The FAF on any ILS is the intersect of the glideslope with the lowest published intercept altitude. In this case, that’s 7800 feet, which happens to be coincident with—but isn’t defined as—DOUMA. The FAA is recharting ILS approaches to make the localizer FAF coincident with the FAF on the ILS, but it’s important to know the difference.)

There are some mountains around Santa Fe. So, as you get lower, the wind that’s favoring Runway 2 is also getting rather bumpy. Between crossing the FAF above glideslope and the turbulence, you’ve got your hands full trying to stay on the localizer and descending (but not too fast) to catch the glideslope. You don’t make it.

You properly briefed the approach and know that as you descend on glideslope, if you reach 6503 feet MSL and can’t see anything pertinent, it’s time to bug out. But on this rather crudely executed “ILS” you’re not on the glideslope, so if you wait until reaching 6503 feet, you might be far enough down the runway that you could have obstacle problems on the missed approach. Regardless, you know you’re not going to be able to land with “normal maneuvers” so you’re going to miss anyway. By when should you start the miss?

Without glideslope guidance, you’re effectively flying the localizer approach. What’s the MAP on the localizer? It’s at the threshold at 1.6 DME. So, as you’re attempting (but failing) to capture that glideslope, if you see your DME tick down to less than 1.6, you should begin the missed approach.

Don’t have DME? We’ll assume you’ve got GPS. So, depending on how your particular navigator works, you might get a DME-like distance readout from the localizer antenna, or you might simply get a waypoint for the runway threshold, such as “RW02.” No matter how your particular navigator works and what it tells you, the point at which you should be executing the missed approach if you’re well above the glideslope is about at the approach end of the runway.

And you thought that all ILS approaches were the same and they were boringly simple. Instead, there’s always something to think about, something to be watching for.

With many thousands of hours, Frank Bowlin has had ample opportunity to learn these and many other subtle lessons first hand.