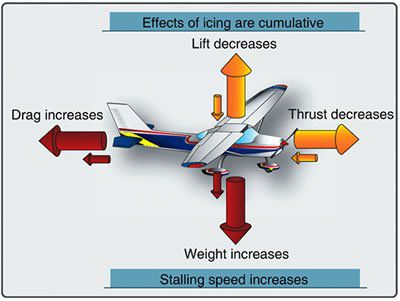 Growing up in the land of conquistadors and cowboys, my opportunities for IMC involved attacking thunderstorms or slipping into shallow ponds of fog. Neither was good for gaining instrument time or icing experience. My instructors and peers shared the same background.

We equated icing to crashing. IMC in freezing temperatures stirred a fight-or-flight response—heart rate increased; blood vessels dilated; vision narrowed. I was a coward. Now, after years of churning the soup with props and jets, I’ve realized the myth frightened us far more than reality needs to.

Prudence precludes following the cavalier conduct of cold-weather cowboys. Stories of their exploits fill NTSB file cabinets. But, an Airmet Zulu or freezing temperatures shouldn’t prevent an IFR flight. Safely plying frozen skies requires stacking the deck in your favor. While I can’t promise a royal flush for every hand, there are ways to consistently beat the ice-house.

The Basics
Frozen stuff doesn’t stick and liquids roll off. Both evaporate. (OK, frozen stuff actually sublimates.) Most airframe icing occurs at the intersection of liquid and solid in a temperature band of -2 to +10 degrees Celsius. Either a drop is partially frozen when striking or freezes after joining an aircraft. Ice can also crystallize directly onto an airplane, but frost accumulates slowly, presenting a low risk while flying.

Airframe icing is only one type of icing. Induction systems, particularly on carbureted piston engines, are susceptible to the frozen ghost. Also, the crash of Air France 447 highlighted the possibility of pitot-tubes being overwhelmed by frozen particles.

Although the AIM lists eight types of airframe icing—clear, glaze, intercycle, known, mixed, residual, rime, and runback—only three are commonly reported. I think of these three as flavors of ice-cream; vanilla, chocolate, and swirl. Knowing why a type of icing forms is like counting cards in poker, it provides information on what’s happening.

Boring and common, rime icing is the vanilla flavor. Identified by a milky white appearance due to air being trapped in the ice, rime icing occurs when small, partially frozen, drops hit the plane and freeze rapidly. This type of icing occurs in a narrow altitude band, about 4000 feet thick, where small droplets are between water and ice states in stable air.

More exotic than rime, clear icing—chocolate, perhaps—occurs when large water droplets slowly freeze. This type of icing often reaches severe or extreme levels. Icicles are an example of clear icing. The same situation occurs in airplanes when a drop of water slowly freezes after airframe contact.

Large water drops in freezing conditions seems like a contradiction. There is an inverse relationship between air temperature and water content. The combination of cold temperatures and big drops indicates an anomaly.

Before Launching
When the potential for ice on your fight exists, caution obliges extra preparation. These preparations include examining weather and routing.

A weather review should answer the following questions. Where is icing forecast? Where is it reported? What type of icing? What is the freezing level? What are the cloud bases and tops? What is the potential for severe icing, particularly around the destination or alternate?

The size of these areas depends on the type of icing. Rime ice is often widespread but in a shallow layer. Cruising a couple thousand feet above or below reported rime icing will usually keep you clear. Conversely, clear ice appears in narrow geographic areas but through a greater altitude range.

Clear icing, as well as freezing rain and ice pellets, is associated with severe icing. You don’t want to play with these conditions. It’s like pushing a bluff when you can tell the other guy has a winning hand.

Knowing the weather helps in picking a suitable route. Don’t fall into the direct trap. I used to give stage checks to students before their solo cross countries. I’d ask them to plan a specific cross country. A direct routing would overfly a 4000 foot mountain range with few checkpoints or landmarks. A slightly indirect route would follow freeways, contain plenty of landmarks, provide dozens of alternate airports, and much lower terrain. Often, this became a learning experience for the students.

Slightly circuitous routes are frequently superior to the most direct.

When chasing the abominable snowman around the clouds, look for a route with the lowest MEAs and plenty of airports. Altitude flexibility yields options for dodging rime ice and nearby alternates provide choices if things just aren’t working out.

Playing the Game
Experience is often the best teacher. When flying while freezing, a couple of strategies are advantageous: understand where ice first forms; fly during the day; check weather enroute; maximize altitude and minimize exposure.

Knowing where to look for a player’s tell is a great advantage in poker. By looking at the wrong place, icing can steal your chips before you realize it.

The horizontal stabilizer is a thinner airfoil than the wing. Therefore, ice accumulates earlier and quicker there. This creates the potential for tail-plane stalls. Once you learn a plane’s “tell” it tends to stay consistent.

Monitoring the tell at night is problematic. Naturally diurnal, human perception narrows as the sun sets. Recognizing changes to the immediate environment and airplane structures is essential when icing potential exists. During the day it is easy to scan the wings, windscreen, and probes. At night, this chore requires a strong flashlight and significant attention. Doable, but a setup for disaster in less than ideal conditions. Single pilot IFR is hard enough. Unless you have an ice light or other technologies to stack the deck, stick to playing with ice during the day. At night, I prefer ice in my drinks, not on my airplane.

Pointing eyeballs through plexiglass is one, although limited, way of assessing weather. Low workload enroute affords an opportunity to check conditions ahead. Check METARs and ATIS reports for any red flags—freezing rain and drizzle, ice pellets, snow with temps above freezing—at the destination and surrounding area. If possible, see if any PIREPS popped up. If not, provide one for the next aviator.

Altitude equals options. Airplanes can descend faster than climb. Planning initial cruise at the highest possible altitude is worthwhile. If icing is encountered, descending out of icing is easier and quicker. Also, climbing provides initial information on altitudes with temperatures conducive to icing or where icing is actually occurring. If icing is found at your max cruise altitude, an altitude without icing will likely be found before the MEA.

While altitude equals options, approaches limit them. Encountering ice while maneuvering for the runway limits choices to either going missed and climbing or toughing it out until touchdown. A couple measures can limit time in the danger zone. Coordinate with ATC to eliminate holding. Ask if a wait is expected ahead. If so, ask if slowing early or holding at altitude is possible.

Once on the approach, don’t delay. Take vectors if available. Only partially configuring is also a good idea. Remember that icing can increase stall speed and extending flaps raises the potential of a tail-plane stall by increasing the angle-of-attack of the horizontal stabilizer.(See “Ice and Tail Stalls” in the December, 2014 IFR.)

The Winning Game
Safely flying into the icy grey yonder takes diligence and care. Easy and early wins create cavalier cowboys at the poker table and in an airplane. Professionals know long-term winners consistently put the odds in their favor. To increase your odds, take a close look at the weather, plan routes strategically, fly during the day, fly high, and minimize time on approaches.

Before flight, identify areas of actual and potential icing. When planning a route, stay out of actual icing and look for a course with the lowest MEAs and most alternate airports. In the air, fly high to have altitude to play with and check weather around your destination. Options are limited once starting an approach. Limit the time low and slow by coordinating with ATC, utilizing vectors and using only partial flaps. By taking these steps, you can fly the frigid skies and find the happy medium between coward and cowboy.

Besides strongly believing that ice is best left to cocktails, Jordan Miller prefers the full hot-wing setup on the Airbuses he flies for a major U.S. airline.