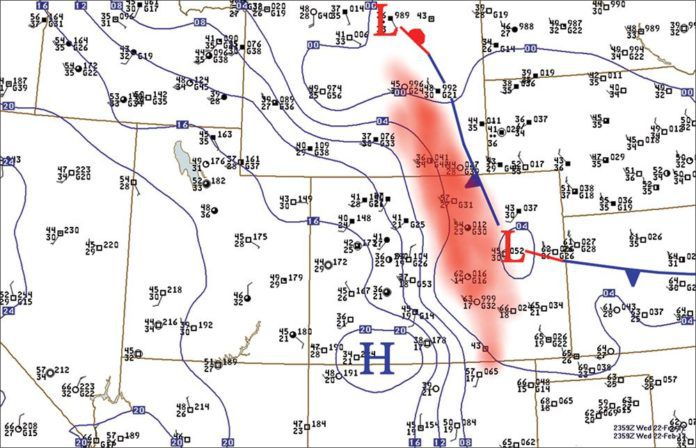 In 1892, E.B. Garriott wrote for the fledgling U.S. Weather Bureau, “Following a period of intense cold the Chinook wind is a welcome visitor in the Northwest. The icy clutch of winter is loosened. The earth throws off its winding sheet of snow. Humanity ventures forth to inhale the balmy, spring-like air. Animate nature rejoices.”

Snow Eater
Though chinook winds were only a curiosity in Garriott’s time, they are a significant concern to aviation today. “Chinook” is derived from an Oregon Native American word meaning “snow eater.” The chinook is a foehn wind occurring in the Rocky Mountains. Foehn winds occur when strong, deep-layer tropospheric winds blow perpendicular to a mountain range. The downslope flow on the lee side causes compressional heating, reducing its relative humidity.

If the upwind side is very moist, the increasing condensation also warms the air mass. Not surprisingly, the strongest chinooks come from stormy Pacific systems making their way across the Great Basin region. Because chinooks occur in winter, they often displace arctic air masses just east of the Rockies, causing dramatic warming episodes that may quickly raise temperatures by 30 or 40 degrees.

Though Colorado pilots have long known of the dangers of chinooks, they grabbed national headlines in 1991 when a United Airlines B-737 crashed in Colorado Springs. The Denver Post wrote “…the kind of violent wind movements that occur along the Rocky Mountains and might have played a role in the crash of United Airlines Flight 585 long have been the curse of pilots flying in Colorado.”

The crash was ultimately linked to rudder design defects, but the final NTSB report contained many pages describing the high winds and mountain wave conditions that day, requiring the large control inputs needed to manage the flight path.

The chart below shows the typical chinook conditions on the evening of February 22, 2012. Winds only reached 32 knots at Denver International Airport and 54 knots at Cheyenne, but the winds close to the mountains in Boulder hit 80 knots. The high winds were caused by the pressure gradient between the high pressure region in southwest Colorado and the low pressure and frontal systems in eastern Colorado and eastern Wyoming.

Cool, low-level air trapped in the valleys of the Rockies west of the Front Range provides an ideal setup for this synergistic effect of supercritical and subcritical flows. The inversion height is important: if it’s too shallow it won’t provide the necessary enhancement of the lee-side winds, and if it’s too deep it actually causes cold air to spill over the mountains, producing a cold bora wind instead of a chinook.

In Flight
The chinook’s effects are mostly turbulence and wind shear caused by eddies and oscillations in the airflow with a scale of hundreds of feet or a few seconds of aircraft travel. Larger-scale changes, on the scale of minutes or many miles, are more gradual and easily managed by the pilot. The chinook is inherently a large-scale disturbance, but the breakdown of large-scale circulations into smaller ones gives us the most turbulence. An unstable atmosphere with thermals and convection will add thermal turbulence to the mechanical turbulence of the chinook.

In weaker chinooks, mountain ranges produce oscillations in the air that may extend hundreds of miles downstream as large-scale standing wave clouds that in theory would be smooth. However the Rockies offer multiple obstacles to the flow, breaking the waves into smaller waves that are felt as turbulence. So even in a weak chinook pattern, moderate to severe clear air turbulence can occur across the entire mountain range and some distance downstream.

Turbulence is proportional to the wind component perpendicular to the mountain range. It’s worst where localized areas of shear exist with air-mass instability allowing for thermals and convection to reach higher levels. This instability, multiple obstacles to wind flow and convection are all common along the Front Range of the Rockies, making this a sweet spot for chinooks.
In stronger chinooks, higher speed may be caused by strong pressure gradients and synergistic subcritical-supercritical flow regimes. The air flow patterns are amplified. Once the air reaches the bottom, restorative forces cause an intense upward motion forming a zone known as the hydraulic jump.

Above this zone is a broad wave breaking region extending high into the troposphere, much as a strong ocean wave reaches a height where it overturns or produces white water. This is a prime area for the breakup of large-scale motion into small-scale, and it breeds severe to extreme turbulence. The implication is that in strong chinooks, hazardous flying conditions can be expected immediately downwind of the mountain range at all flight levels, especially about 20 to 30 miles downstream of the mountain range.

The oscillations continue downwind. On the next descent the air hits the ground and diverges. One branch recycles back westward to rejoin the overall wind flow, producing a horizontal vortex or “rotor”. With enough humidity you may see a tube-shaped rotor cloud, but in more typical drier conditions it remains invisible. Expect rotors anyplace downwind and within about 20 nm of the mountain range at an altitude beneath the mountain tops. The rotors will be parallel with the mountain range. Other rotors may exist further downwind but are successively weaker and at lower altitudes.

Though a roll cloud may not be seen, strong chinooks are often accompanied by spectacular multiple-layered standing lenticular clouds (“altocumulus standing lenticular” or ACSL) and a chinook arch, a broad mid-level altocumulus or cirrus cloud extending leeward from the mountains. These are visual signs that a strong chinook may be blowing and you may wish to reconsider your plans.

What to expect
Most chinook winds are normally less than 50 knots, but can exceed 100 knots. However, surface charts are often deceptive because the highest wind speeds in a chinook event are usually confined to the foothill regions. For example during the February 16, 2007 downslope wind event, Boulder, Colorado recorded winds of 101 mph at the National Wind Technology Center, while the METAR at Denver International Airport reported 25 knots gusting to 40 knots during the height of the event. Pilots and forecasters have to review all of the available data—including mesonet, wind profiler and WSR-88D velocity profile data—to learn how serious a chinook event is.

Numerical forecast models can’t resolve chinooks at a scale much under tens of miles. Pilots may utilize various models to split hairs with the output products to make an educated guess about wind conditions. These simulations may be excellent for identifying the onset of a downslope wind event in general and providing information on trends and locations where they will be strongest, but are not capable of providing meaningful information on a smaller scale.

Finally, pilots should always have a conceptual idea of where these wave patterns are when working in and near mountain ranges. The Aviation Weather Center (http://aviationweather.gov/adds/turbulence/) has excellent turbulence products. But again these are based on large-scale patterns and numerical forecast models that do not capture the fine-grained detail of lee waves, rotors, and the exact locations of low-level wind shear.

For example, if a strong chinook situation is ongoing and winds at an airport along the foothills are unusually light and variable or easterly, the novice might think he’s escaping the brunt of the storm. A more experienced pilot, however, will realize that the airfield is simply within the zone of “recycled” easterly surface winds beneath a rotor, and that the rotor could very well drift east or west into the approach corridor with little or no warning.

The chinook is likely the most severe foehn wind on earth due to the unique physiography and climatology of the Rockies, but what we learn from these chinooks applies equally well to the northeasterly Santa Ana winds of the California coast, the easterly Wasatch winds in the Salt Lake City basin, the east winds of Oregon and Washington, and even the zonda of Argentina.

Tether Flying
Long enough ago that the statute of limitations has long since expired, there were a couple fledgling student pilots attending the University of Colorado in Boulder. Engineering students all, they tended to get into a bit of mischief.
These inquisitive students were sitting around one evening when all hell broke loose. The wind howled out of the mountains at speeds that made them think they’d soon be in class at the University of Kansas. Being inquisitive, they researched the wind and found it was a recurring monster called a “chinook.” Being poor pilots, they had an idea.

Being engineering students, they built a special tie-down harness for the Cessna 172 that one of them could access. The harness was about 20 feet long and was designed to allow the plane a little freedom in the next chinook. In fact, without power, it was planned to let them lift off, gently bank and practice landing. Until one of the tie-down rings gave way on the maiden voyage, that is.

It was fun while it lasted. —FB

Tim Vasquez is a meteorologist who also writes the Weatherwise column, “Forecast Center,” at www.weathergraphics.com/edu.