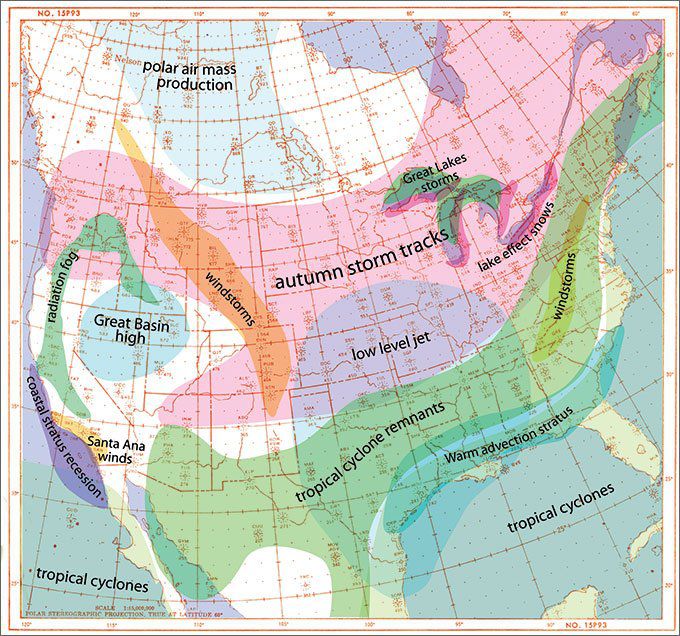 By the time September arrives, most pilots in the northern hemisphere are tired of picking their way past cumulus clouds, dodging thunderstorms and dealing with diminished performance from high density altitudes. But with the arrival of autumn, things are about to change. It’s not just a season where things get colder and we have to review icing. There is a lot in the details that can help your flight planning.

Stronger Winds Aloft
The dominant change in the weather is an increase in flow across the United States in the upper troposphere. With the sun appearing progressively lower in the sky in polar latitudes, the troposphere in these regions begins cooling. This not only causes a gradual expansion of cold air masses southward, it also leads to intensification of the contrast between polar air and the warmer air over tropical latitudes and the oceans. Not only do we get an abundance of large weather systems, but we start seeing the return of triple digit wind speeds.

Heightened temperature contrasts across a region means strong organization of weather systems that dynamically intensify and march across entire continents. You can predict system movement from the middle tropospheric wind charts (500 mb, or FL180).

The winds here are sometimes called “steering flow,” because they seem to steer the surface systems. Although interactions in the thermal and mass fields determine the direction a system moves, this normally coincides with the steering flow. The surface systems often show a movement of about 50 percent that of the 500 mb winds. So with the most basic snapshot of upper air patterns across the U.S., you can predict which way things will move—a great start.

Once the autumn jet stream pattern is fully established over the United States, there is a succession of weather systems that appear in the Pacific Northwest, move across the Rockies, and then cross the Great Lakes area. These systems have well-developed cold and warm fronts. They are followed by large, cold high pressure regions from Canada, which expand over almost the entire central and eastern United States. When that happens, another system appears in the Pacific Northwest and the cycle repeats. As polar air cools and deepens, the storm track may shift to the central or even the southern U.S.

Knowing the steering flow and the location, you have some idea of which way the weather is moving. Also the warm advection wing of the weather system is most often associated with MVFR and IFR conditions. This is the zone ahead of the surface low’s track where cyclonic flow brings warm air northward, and specifically it’s the area along and north of the warm front where warm advection is best catalyzed into bad weather. The richer the moisture in the warm air and the stronger the temperature contrast across the warm front, the worse the weather. So if Louisville is below minimums and the warm front is in Kentucky, it may be safer to divert to Nashville than to Dayton.

The Gulf Coast Becomes Tricky
Tropical depressions, tropical storms and hurricanes are hallmarks of the autumn months. These mostly affect the Caribbean and Gulf of Mexico region.
Such storms also develop off the west coast of tropical Mexico, on rare occasion affecting the desert Southwest. Obviously, hurricane flying is a separate issue, but for route planning purposes keep in mind that the remains of tropical cyclones bring astronomical amounts of moisture far inland. As far north as New Mexico, Oklahoma and Ohio, the remains of tropical cyclones can produce days of widespread showers, IFR conditions and local flooding.
Otherwise, autumn brings a slow reduction in afternoon thunderstorms as solar heating subsides. Storm activity doesn’t go away, but tends to link up with fronts and other weather systems instead of just popping up in the afternoon. So the average autumn day is hazy but VMC is a good bet in September and early October.

As strong upper flow takes hold over the United States, it occasionally acts to enhance and accelerate the southerly low level flow, particularly when upper-level troughs are approaching from the West Coast. This acceleration takes hold each night above the nocturnal radiational inversion, producing a shallow band of winds known as the low-level jet.

This feature peaks around dawn, and is marked by a shallow band of 30-60 kt winds at a height of 1000-5000 feet AGL. Because of the strong vertical shear between the low-level jet and the air beneath, you can quickly be thrown off a perfect approach if you’re not anticipating the wind change.
The low-level jet and the moisture it brings onshore sometimes produces another headache for IFR pilots: surprise stratus. As cold air masses affect the continent during the autumn, the ground temperatures begin cooling. Warm moist air coming off the Gulf of Mexico moving over the cooler interior of the Gulf Coast states either loses heat to the ground, producing fog, or is forced to ascend “isentropically” over the cool air mass, producing stratus.
A pilot planning a pre-dawn arrival in Houston or Alexandria looks at the infrared satellite images and sees that it’s clear, but on descent sees overcast stratus in the moonlight and the ASOS reports IMC.

This trap is often sprung on pilots during the autumn months. The cool ground in the clear air often has the same temperature as the stratus. To the satellite’s infrared sensors, it all looks the same shade of gray. A sharp aviation forecaster will be monitoring METARs, working with multispectral infrared imagery, and relying on an old trick: looking for the disappearance of lakes. They’re relatively warm and appear as small dark specks when the sky is clear, but when they disappear, something has covered them up. Either the Independence Day invasion is on or stratus has covered them up. Regardless of what the TAF says, pilots must be alert for nighttime stratus in the Gulf Coast area when winds are southerly.

Great Flying On the West Coast
During the summer months on the West Coast, the cool Pacific air and hot inland air combine to produce a persistent west-to-east component in the low-level flow. This brings fog and stratus into coastal airports during the day.
But as autumn arrives, interior regions begin cooling and a semi-permanent Great Basin high pressure develops over Nevada, Utah and Idaho. This cool air expands and gradually disrupts the summer pattern, driving the stratus well offshore. The month of September often marks the transition period and brings delightful flying weather to California, with clear skies and light winds.

As autumn progresses, this high becomes strong enough to occasionally produce east-to-west flow. This doesn’t affect flying weather much, but if the Great Basin is being hit by a cold wave and Salt Lake City is reporting winter weather, the easterly winds in Southern California may intensify and amplify, producing a wind event known as the Santa Anas.

November and December are the most likely time for this to happen. The main impact on aviation is crosswinds, moderate to severe low-level turbulence, and in dry seasons, there may be visibility restrictions from dust and smoke.

During the autumn months, organized weather systems affect mainly the Pacific Northwest and northern California. It is here where IMC is most likely, along with possible icing as rainstorms come onshore. These are well forecast in the TAFs. However the storms also bring a lot of Pacific moisture deep inland, causing stratus and fog events in places like the San Joaquin Valley and the Columbia River basin as skies clear and strong radiational cooling takes hold.

This fog is often trapped under a low-level inversion and if a stagnant high moves in, the fog may linger for days. If the moisture works even further east to the Snake River Plain and Salt Lake area, it may become trapped under the semi-permanent Great Basin high and take weeks to erode.

These systems are already unstable, so adding the moisture and instability quickly yields stratus, stratocumulus and showers. Deep lows that pass over the Great Lakes are particularly prone to explosive development sufficient to sink the Edmund Fitzgerald in November, 1975, and they may contain severe icing and embedded storms.

Most pilots come into contact with Great Lakes weather systems in the cold, gusty swath of the northwest flow left in their wake. Clear skies and strong winds occur throughout the region, except on the southern shores of the Great Lakes.

Here the cold air has picked up moisture and destabilized, producing shallow stratocumulus and cumulus towers that often produce rain and “lake effect” snow. Buffalo is famous for this pattern, where conditions can quickly go IMC, but cities like Cleveland, Gary and Rochester are all vulnerable.

Fortunately better weather is usually 50 miles inland, where the air mass has spent its heat and moisture. The lake effect phenomenon goes away by December as lakes have lost their summer heat.

The eastern United States experiences clear air windstorms just like the Rockies. One favored area for high wind events is the Appalachian Mountains and the eastern foothills, just after the passage of a strong cold front when gusty northwest winds are blowing.

These windstorms are foehn winds, same as the Rocky Mountain chinook (described in IFR, December, 2012) and the same principles apply. The height of the postfrontal inversion is important, with a height right at the mountaintop level having the most potential to enhance the high winds. If you’re flying into an Appalachians airport and you notice at the FBO that a strong cold front is moving through your destination, keep tabs on those wind speeds.

Autumn Flying Tips
As a general rule of thumb, whenever there has been rain the previous day followed by clear skies at night with light and variable wind, there is a good possibility of fog. This is true not only in autumn but in all seasons. If your destination got plenty of rain and the forecast maps show high pressure tracking directly toward that location, this suggests the potential for fog.

By October, day-to-day freezing levels over much of the United States fall from 15,000 to less than 10,000 ft and large precipitation areas begin appearing on the charts. As a result, icing starts becoming a significant factor in flight planning. This is a good time to review the basics of icing and to monitor changes in the freezing level. The layer just above this level is the danger zone, given enough moisture and lift.

An unstable air mass is likely to have turbulence. This is especially true if there is unusually strong surface heating with unusually cold air aloft, or if there are strong winds crossing perpendicularly over a mountain range. In the autumn months and in spring, all of these often apply. Check Aviation Weather Center forecasts and monitor PIREPs. —TV

Tim Vasquez, a career meteorologist, operates www.weathergraphics.com in Norman, Oklahoma. He hopes someday to have the opportunity to learn to fly. Any offers?