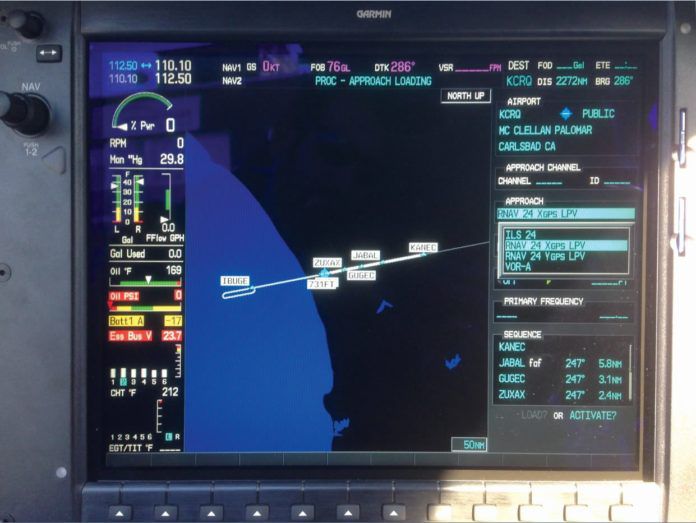 When I learned IFR, the oddball technique for GA pilots was the DME Arc. These were the days of “turn 10, twist 10,” which was the best we had for approximating a curve using the straight-line navigation of VORs and slant-range distance. When GPS came on the scene, the box simply drew the magenta line in an arc and we, or George, followed it. An era was over.

The progeny of DME arcs are the graceful curves of RNAV Required Navigation Performance (RNP) approaches that thread airliners down to socked-in runways set in rocky chasms that defy any kind of a straight-in approach.

You won’t see RNP for the non-airline set for a while. However, RNP-like curves are appearing in plain ol’ GPS approaches, such as the RNAV (GPS) X Runway 24 at Palomar (KCRQ).

The curve you see from JIDOV to KANEC via FEHPY are two legs defined by “radius to fix,” or RF. Conceptually, it’s just like a DME arc. Arcs were defined by a DME distance (radius) from a specific VOR (fix). These RF legs are defined in the navigator the same way, there’s some point in space around which the system is drawing an arc, except now we don’t care or know what that point is. All we need to see as pilots is the curved path to follow.

The beauty is that a curved path can be created at any place and of any radius to serve the needs of an approach. As you see between FEHPY and KANEC, you might be descending and turning simultaneously. It’s functionally is no different than flying a DME arc using pure GPS guidance except that the turns could be much tighter.

Except you can’t fly this arc in a GA airplane. Not yet, anyway. Several GA navigators have RF capability. For example, all of Garmin’s GTN 600 and 700 navigators have RF with the latest software releases. However, no public databases for certified aircraft have those RF legs. If you load this RNAV (GPS) X approach, such as in the photo of a new Cirrus Perspective (G1000) system, guidance starts at KANEC.

But Can You Fly It?

The database omission shouldn’t matter because you could get vectors to KANEC and fly the rest from there, right? I’d agree, but the regs aren’t explicitly clear on this point. The catch is that “RF Required” appears in the notes section. Obviously, that’s for the two RF legs before KANEC.

Getting vectors to KANEC should obviate the need for RF. FAR 91.175 (i) hints the pilot can make that call saying, “When radar is approved at certain locations for ATC purposes, it may be used not only for surveillance and precision radar approaches, as applicable, but also may be used in conjunction with instrument approach procedures predicated on other types of radio navigational aids. Radar vectors may be authorized to provide course guidance through the segments of an approach to the final course or fix.”

That’s good enough for me. You might see it differently. Here at Palomar, it’s actually a moot point because there’s a RNAV (GPS) Y approach as well. Quick review: When there are multiple approaches serving the same runway and using the same navigational system, they’re labeled starting with Z and going backward through the alphabet. See AIM 5-4-5 a. (3) (e) for more.

The GPS X and GPS Y at Palomar are functionally identical from KANEC inbound. If ATC tells you to expect the X approach and you’re not comfortable with it, request the Y instead. If you do accept the X, you might want to ensure they know you require vectors to KANEC.

If there’s an X and a Y, there must be a Z approach. There is, but it’s the RNAV (RNP) Z Runway 24, which requires special authorization. It’s tuned to expedite airline arrivals in slightly better weather, so you’re not missing anything here.

There should come a day, though, when RF legs and the capabilities they offer will find their way into our general aviation cockpits. The tighter turns will replace “turn-10, twist-10” of DME arcs with something more like “hang 10.” But if we could handle approximating curves with two VORs and a little orange readout of distance, surely we can follow a curving pink line into the future.

Jeff Van West misses watching a DME arc held within a tenth of a mile in a gusty, variable crosswind, feeding a rock-solid ILS. Perhaps someday he’ll fly with a pilot like that again.

Although the legality is a bit vague, the safety of ignoring “RF required” at Palomar with a vector past the RF legs is difficult to argue. It’s another place where regulations lag behind technology.

Luckily, the FAA is clear on some points. Ignoring “ADF Required,” “DME Required,” and “Dual VORs Required” because you have an IFR GPS is spelled out in AC 90-108. It also tells you how to use GPS for DME even if it’s in the title of an approach, so long as the DME is for along-track distance rather than lateral guidance. DME arcs in the final segment are rare.

But what if you don’t have GPS available, or there’s another requirement you can’t meet? For example, “ADF required” might appear in notes because an ADF is required for the missed approach. Can you fly this approach?

This was common in pre-GPS days, and our solution was to figure out why the requirement was there and plan around that. In this case, we’d ask ATC for an alternate missed approach that didn’t use ADF. We’d get the new instructions and proceed. All I can say is that it never raised an eyebrow, even if we flew the missed, because it was no problem to fly.

There are limits. With a non-WAAS GPS in your aircraft, your destination or your alternate must have at least one approach not predicated on having a GPS, which includes meeting any requirements in the notes. Here the guidance is specific that you must actually have the equipment on board. Another common difference between Y and Z versions of an approach is required climb gradients on the missed—something you either can or you can’t do.

However, someday your only option might be accepting an approach with a requirement you don’t have but can replace. So it’s worth deciding now how you’ll handle it. —JVW