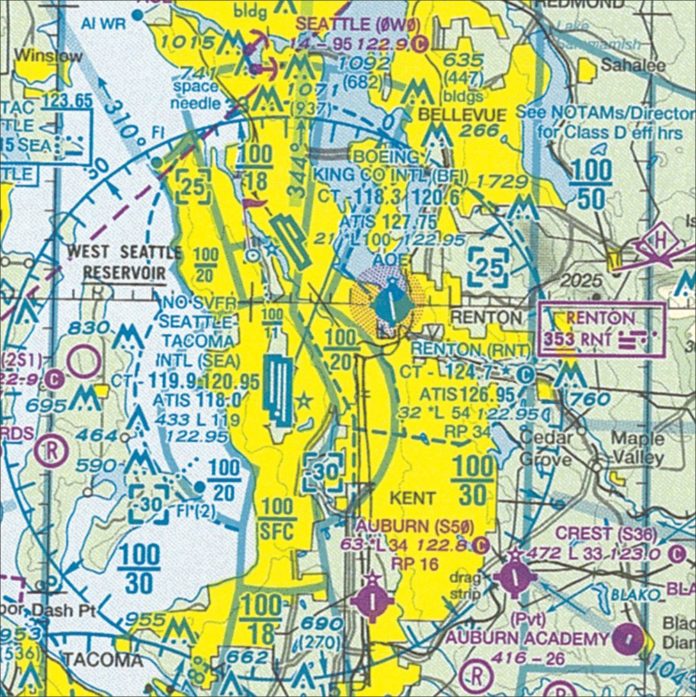 The frequency is can’t-get-a-word-in-edgewise busy and ATC’s call was unclear, blocked or just missing. You think you know what’s next, but you’re not sure. What should you do?

What do you do when you’re only 90-percent sure you know what ATC wants? Some folks would just do what they think they were told. Others would try—no matter how futilely— to get a clarification. Still others would do nothing, assuming the controller will call back because they didn’t acknowledge the instruction.

The regs might make it seem like there’s always a right answer here but often there isn’t a clearly right answer. A lot depends on the specifics of the situation, your level of experience and the environment in which you’re flying.

The Easy Setup
Imagine you’re going into a busy GA field in dense Class B airspace. You can probably pick an example from memory, but let’s use Boeing Field in Seattle, Wash., for our example. Say the weather is good and you’re out doing some practice approaches on an IFR clearance. This time you’re wrestling with the ILS Runway 31L.

Because it’s a nice day, of course there are lots of others out turning gasoline into a bit of fun, and at the moment the right traffic pattern for Runway 31R is full. In fact, it’s so full that they’re extending the final out so that the parallels are turning final about the same distance out. Not too far, though, because you all need to stay out of Renton and SeaTac’s airspace a bit further south.

You’re on left base for 31L a few miles out, expecting your final vector and clearance. And it comes: “CloudPuncher Four Four X-Ray, two miles SSSSSQQQQQEEEEEEAAAAALLLLL approach.”

Whateryagonnado?
This one is actually pretty easy and may be the only situation in this article where it is. The blocked transmission that was obviously for you and everyone on frequency is expecting a response. Just ask for a clarification: “Partially blocked. Say again for CloudPuncher Four Four X-Ray?”

But what if the call sign was blocked, so you only think it was for you? Or what if the entire transmission was blocked and you really don’t know what it was? You could just respond with “Blocked,” like 12 of the wannabe pros out that day, so even that is blocked and the controller still doesn’t know what’s going on. Or, you could assume it was for you and make the turn. Or, you could ignore it and wait.

No pressure, but this is a decision you have to make in the ensuing 20 seconds.

Safety First
Assume a factor in your situation is that you’re about to come nose-to-nose with VFR traffic on base for the parallel runway. It’s VMC and you believe in “see and be seen,” but the other guy might not be quite so inclined—or aware. You can continue on your base leg, trying to get clarification from the controller, getting ever closer to that student on his first solo who’s fixated on the runway. But it’s almost certain that you’ll have to turn in a moment for noise abatement. (Airplanes colliding head-on make a lot of unpopular noise.)
When I’m trying to decide the “right” thing to do, I ask myself a two questions: What’s the safest thing to do, and what will sound the most reasonable if I’m asked to explain my actions afterwards to the FAA? This is really a variant of the old saying, “I’d rather be a witness at my hearing than the guest of honor at a funeral.”

This head-on scenario is easy: I’d start the turn. But I’d still proactively try to get clarification from the controller. In a real-life situation almost identical to this, our very own editor Jeff Van West did exactly this and—when ATC finally got back to him after he had been on the localizer inbound for almost 15 seconds—the controller thanked him. But maybe next time it won’t be so straightforward.

Perhaps the next time it’s IMC and you don’t have nose-to-nose traffic. Again, if you consider what’s safest, there’s no real threat to staying on base, at least not in the short term. So, making the turn in IMC without a clear instruction to do so may not be necessary—or supportable afterwards if you get asked to make a phone call. After all, the worst that could happen is getting vectored out for another shot at the approach, right? Besides, you’re just out for the practice anyway!

But let’s suppose you know from previous radio traffic that there is another aircraft on the opposing downwind, somewhere out there in the clouds. Let’s suppose you don’t have TCAS or other traffic reporting onboard. Do you turn if you weren’t sure the call was for you?

Again, probably not. A certified controller should have enough play in his spacing and thinking ahead that he was ready for you to get called and miss the turn. As we all know, this happens. It’s also possible the other aircraft might turn thinking the call was for him. That would really complicate matters.
But this would be a good time to get really aggressive on at least getting your call sign on the air as a reminder that you need some clarification on what you’re supposed to do now.

Hello? Anybody?
Probably the worst variation on this scenario is if you simply don’t get a call. Let’s take an extreme case where you’re coming into Podunk Muni, an uncontrolled field, at one a.m. and you’re the only aircraft on the frequency. You’re on the downwind for the ILS, IMC and waiting … and waiting … the localizer comes alive … and still no call despite your calls to ATC.

Here it seems safe to assume something is wrong. Maybe it’s a radio issue. Maybe the controller is a closet narcoleptic. But the risk of turning is demonstrably less than the risk of flying onward hoping to hear from someone. It’s easy to imagine defending this one, too.

But what if you don’t get a call and the frequency is jammed? Maybe the controller is busy handling enough traffic that he’s musing about the next strike vote, and there are a couple of students on frequency who require a lot of care and “guidance.” Your professionalism in handling instructions and crisp radio responses has made him complacent about you and you’re about to blow through the final approach course without a clearance for the approach.
Again, with no opposing traffic, the safest thing to do is keep on truckin’ on your last assigned heading.

But let’s consider if that’s the best thing to do. In the past, these pages have explored the idea that a congested frequency could momentarily constitute lost communications, in which case you should do what you were told to expect. You know that the last vector was the setup for the approach. So, maybe you should start that turn and intercept final?

This one is so full of “it depends” qualifiers that it’s outright scary. But I’ll step out on a limb far enough to hear it creak.

If I were flying my Cessna into a busy GA airport with a lot of practice approaches going on in VMC, I’d probably turn for the approach and see if I could just squeeze my call sign in on the radio as a reminder to the controller. The idea being that the controller might need the help keeping the flow going while he deals with those who need a bit more attention, and me screaming across final is additional workload he just doesn’t need.

On the other hand, if I was driving the airliner into a saturated Class B hub in IMC, I’d just continue through final unless I had a traffic conflict. When the controller has a chance, he’ll just issue another vector and all will be well.
“Really?” you say. Yes, really. VMC in a busy GA airspace, I’d intercept final. IMC at a major hub, I’d go through final and wait for the call.

My reasoning is that GA traffic is far more unpredictable and inconsistent, particularly in VMC. Aircraft are coming from all directions (no arrival gates) and have at least a 2:1 speed range. Thus, in addition to the frequency being saturated and the controller being task-saturated, his ability to keep the big picture might be nearing the limit because each airplane has its own unique needs.

But at that Class B hub, everyone is a pro and the flow is extremely predictable and consistent. Nobody’s doing practice approaches; everyone is lined up through the arrival gates and they’re all at the same airspeed. Sure, the frequency might be full and the controller’s ability to issue instructions might be nearing the limit, but his ability to see and understand what’s happening is still just fine.

In fact, when he sees me about to go through final while he’s still vectoring some other traffic, chances are he’s already formulating Plan B. So, the last thing he needs me to do is muck up that Plan B by starting the turn on my own.

No Simple Solution
That’s my story and I’m stickin’ to it. There’s no absolute right or wrong and you may well make a different choice.

One answer is clearly more defendable under the regs: If you turn, you are leaving yourself open to violating FAR 91.123 if you guess wrong. Then again, if you blindly march ahead into a collision with other aircraft or terrain, they can chisel “Followed FAR 91.123” on your tombstone.

You can argue that radio silence when your attempt to communicate, or just such congestion that you can’t break in, constitutes an FAR 91.185 situation of lost comm. That means land as soon a practical VFR (i.e., turn inbound) or continue as told to expect (also equating turn inbound, as you were being vectored for the final approach course). Collision fear brings in the trump card of FAR 91.3 and emergency action. But there’s no guarantee an FAA inspector or NTSB judge will buy that.

So you’ve got to go with what you think is best … and hope it’s right.
In 30 years of flying, Chet has been thanked and spanked. He prefers thanks, but enjoys the occasional spanking under the right circumstances.

No ATC call? Maybe they need coffee
Former IFR editor Paul Berge is also former air traffic controller Paul Berge. He finished his career voluntarily—and not because of this incident—but the story points out how sometimes taking the initiative as a pilot works out best:

I’d been awake for 22 hours and was five hours into my second shift. I could never sleep in the eight daylight hours between shifts. By 3 a.m., I was drained. One target crawled across my scope on vectors for the ILS. Alone in the radar room, I stared. Seven stories above me, a lone tower controller had the same radar picture but, because she wasn’t radar-certified yet, couldn’t vector unsupervised.

Sitting upright, I watched the target. One sweep it was there, and the next, it vanished. I blinked, increased the radar gain until I could see every cornstalk and silo for 60 miles, but no Bonanza. Its flight progress strip was in front of me but no radar target.

I called: “… radio check.” No answer. I called again: “… if you hear me, ident.” Nothing. Where the hell was it?
Then, over the speaker, the tower controller—who also monitored my approach frequency—said, “You looking for the Bonanza?”

I filed the flight progress strip, looked at the scope and realized I’d fallen asleep—seated upright, pen in hand—and the pilot wisely joined the localizer and called Tower. —Paul Berge