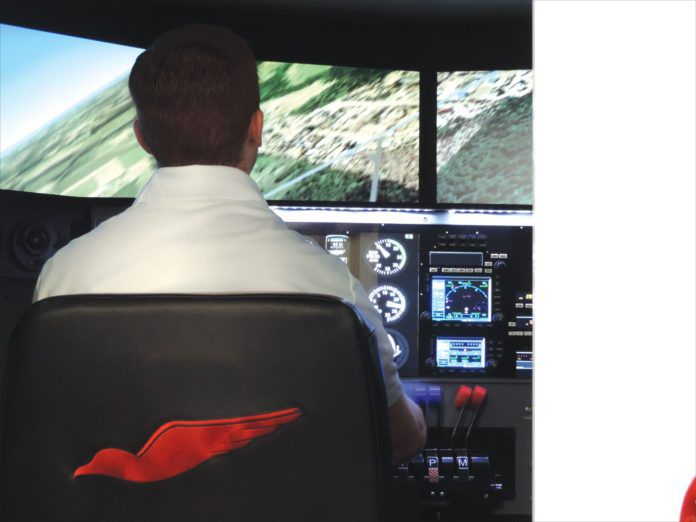 With the dramatically increasing capabilities and decreasing prices for simulators, they’ve become an essential tool for serious training. Is anyone not yet convinced?

There’s probably a sim at your nearest serious flight school, and it might even offer motion—all for a modest hourly rate considering that fuel alone for an airplane is usually well north of $40 per hour.

So, just one question remains: Should you go with motion or is the static (non-motion) sim as good? I believe the answer to that question is a resounding, “Yes.”

Why Sim?
Probably ever since the first flight simulators, their role has been uncertain while their value was clear. Some use the simulator as an adjunct or extension to aircraft-based flight training.

Others work to establish the simulator as a platform in which to efficiently and economically accomplish training tasks and instead use the aircraft as the adjunct. Regardless, simulator training should be an integral component of any quality instruction from basic training through advanced and refresher training.

Why? There are a few reasons. Clearly, you can do things in the simulator that you can’t—or shouldn’t—do in an airplane. For example, when was the last time you had an engine failure in IMC? Or a complete electrical failure? Have you ever experienced a vacuum pump failure and the insidious slow death of your gyros, or do you simply rely on putting a sticky note over them to declare them failed for practice? Exposure to these things will make you better prepared should the real thing happen.

A simulator is also perfect to drill tasks and procedures. Say you just can’t nail a glideslope on an ILS. Probably the most you could hope for in a real airplane is a few practice ILSes in an hour. In a sim, you can be positioned right outside the final approach fix and take it to the runway, time and time again, probably as many as 10 or more times in an hour.

So, you can practice situations that you can’t practice in an airplane, you can get more done in the sim, and it costs half as much. What’s not to like?
Well, you’ve got to have the right attitude. Most of us, me included, dread—at least to a certain extent—time “in the box.” We fear that the situation thrown at us will be something we can’t handle.

Of course it will be. That’s the idea. The simulator is a place to make mistakes and learn from them, to practice something that hopefully you’ll never experience in the air. Don’t view it as a test, but as an opportunity to safely explore your limits so you can expand them.

The Simulated Experience
An airplane definitely stimulates four of your five senses—sight, sound, smell and touch. To simulate the experience of flight to the greatest degree of fidelity you’ve got to tickle those same four senses. Sight and sound are the easiest. All simulators do this to some degree. They have an instrument panel and probably some view outside, while reproducing at least basic engine sounds.

If you’re not paying attention in flight, such as at cruise on autopilot while fiddling with your play list, and you blow an oil hose, your first indication might be the smell of oil. It takes a highly sophisticated (expensive) device to simulate that, so in GA we’re left to our imagination there.

Last is the sense of touch. For years, our GA simulators, while often quite sophisticated in their fidelity to the instrument panel and possibly the view outside, couldn’t stimulate the tactile sensation of of an actual aircraft.

Say you’re hand-flying an airplane in some light turbulence. It’s IMC and you have your hands full as you near your destination. You’ve got to look up the weather frequency, tune it, switch the audio panel to hear the broadcast and then copy it down. You’ve got to brief and setup for the approach. While doing all that, you’ve got to keep flying the airplane, on course and on altitude.

It’s a lot to do, but the airplane helps. If the airplane is properly trimmed and is a reasonably stable platform, you can divert your attention for brief moments. If the airplane needs you back on the controls, it’ll often bump you in the rear or on an elbow or it may even call out to you with a change in engine or wind noise. There’s usually some cue, although sometimes quite subtle, that returns your attention to the instruments while you perform auxiliary tasks.

If you’re flying a static sim, you’re not going to get that seat-of-the-pants feedback and you often can look away for just enough time to tune a radio and find yourself 10 degrees off course and descending at a couple hundred feet per minute.

High Fidelity
So, for the more accurate simulation of an airplane, you want a simulator that has motion. But, interestingly, that motion doesn’t have to be too realistic to have most of the same value.

Redbird brought serious GA sims in general, and full-motion sims in particular, to an unprecedented low-price point. As you’d expect, that comes with some compromises, like motion accuracy.

Airline level-D simulators are accurate enough that the FAA has said you can log landings in them. I took my ATP checkride in a simulator before ever flying the actual airplane from the left seat.

But, that’s the airlines. Do you really need a simulator so accurate that it can reproduce the bumps you might feel as you taxi over seams in the taxiway? No, not at all.

In fact, you really don’t need much motion accuracy at all. As long as something is actually moving that even remotely resembles the sensation you’ll get in the airplane, you’ll get nearly the same value from just a few motors, belts and gears as from an extremely sophisticated hydraulic system costing more than most small airplanes.

And that’s the point of the economical motion systems. No, you don’t get a particularly faithful simulation of the feelings your body gets in an actual aircraft, but you don’t need that. A rough approximation is sufficient to provide meaningful cues as to what is happening and your brain, together with the visuals, fills in the blanks.

Best Training Benefit
But, do you want motion? The answer requires digging deeper into how you’re using the simulator.

Why are you in the sim? Are you using the sim in lieu of an airplane, perhaps even in a program that does the bulk of your training in the simulator? If so, then the higher the simulation fidelity, the better the training, so long as you can afford it. Redbird and hopefully others to follow, are on the right track for this as they combine an acceptable simulation experience at a compelling price point.

But, that may not be exactly what you want. Instead of a realistic simulation of flight, you might want to maximize your learning, and we’re beginning to discover that those two are not necessarily the same.

I’m going to posit here that if you’re using the simulator to broaden your experience base or cover abnormal situations, motion is what you want.
But, to finely hone some skill, regardless of whether that skill is elementary or complex, the additional cues you get from motion might be unnecessary and might, indeed, be a crutch.

Let’s return to that example of performing ancillary tasks in turbulence. Yes, the experience with motion is somewhat easier to handle than in a static simulator. But, in which environment do you think you’ll develop the best ability to multi-task and keep an instrument scan going while doing all the other things required of a pilot in IMC?

In a static simulator in turbulence, without that physical feedback, you’ll soon learn to somehow keep one eye on the instruments and one on tuning that radio or copying the weather, to prevent the sim from running away from you. That skill will serve you ever so much better in an actual airplane where you usually also have movement to trigger a quick instrument scan, but where you can’t always rely on it.

In these circumstances you may well be better off without motion—you can separately turn off the motion—practicing that skill without the external feedback. The result will likely serve you better in a broader range of in-flight circumstances.

Find the Right Simulator
Pick your sim carefully. I flew one sim where the geometry of the yoke, seat and rudder pedals was such that I could barely fly the thing. The controls were sloppy and awkward. The flap switch, was about as cheap a rocker switch as it could be and you had to push the bottom of it with a lot of force, then kind of rock your finger to get it to make contact to actually put down the flaps. My time in that sim was not valuable because I fought the device.
If I were looking for a simulator today, motion wouldn’t be the first criteria. I’d first want to know things like the cost and if I could setup and practice my own scenarios or if I need an instructor. Of critical importance would be the faithfulness of the flight dynamics, the visuals and the quality of the controls themselves.

Whether or not you need or want motion, of course, depends on your training objectives as discussed above. All other factors of cost, quality, access, etc. being comparable, I’d definitely go with the motion sim, and for those occasions when I wanted to hone a skill for which the motion might get in the way, I’d simply turn it off.

But, if the motion sim were lacking in one or more of those other factors, I’d be happy to use a static sim and would still be better for the experience.
Frank Bowlin knows simulators are terrific training devices, but he still gets nervous at the prospect of gettin’ in “the box.”