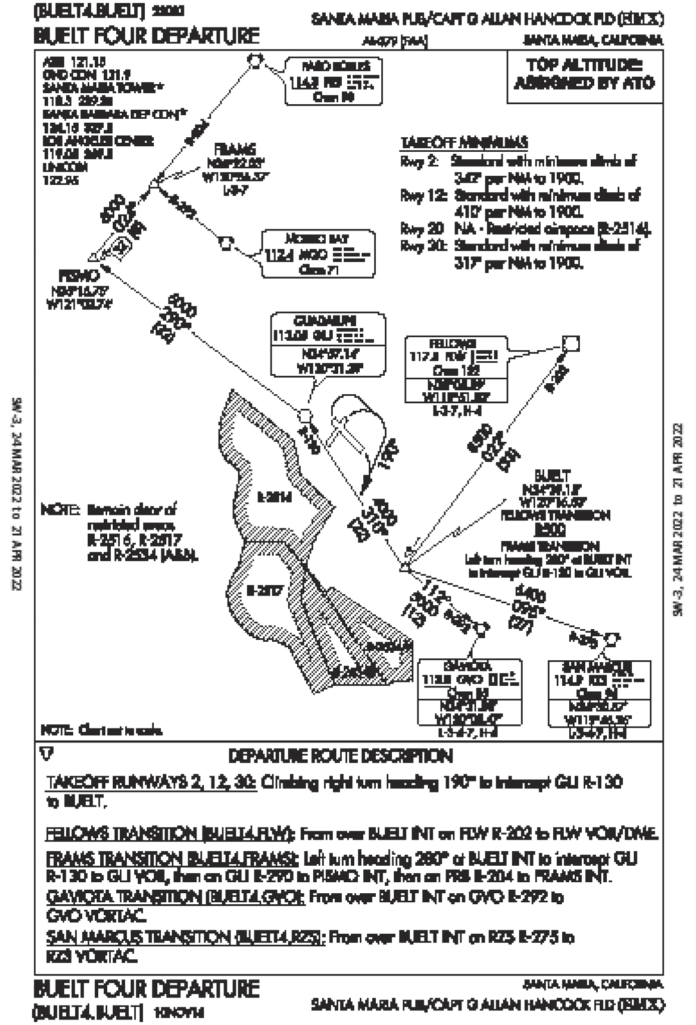 Today’s Sim Challenge is just an out-and-back. You’ll start on the ramp at Santa Maria, California, (KSMX) and hop over the hills a scant 76 NM to Bakersfield Muni (L45). Leg Two is just the reverse. Simple … except you’ll set the outside visuals to deep nighttime with ceilings of 1000 feet at KSMX and visibility of 1.5 SM. Dial up a nice NW wind. Say 320 @ 15—or more if you’re feeling game. If you can, add a stiff wind at altitude. Something like 40-50 knots out of the northwest by 5000 feet.

Set the skies to broken clouds. Several layers would be best. Visibility can be anywhere from two SM to 20 as you wish. The big issue on visibility for this flight will be the absence of sunlight: Set the sim to be night time.

Fly whatever you normally fly. Even in a 172 these flights are an hour each way. The faster your craft, the more challenging some of the descents might be, but that’s up to you. An approach-capable GPS is mandatory for this challenge. WAAS is optional.

We also suggest you fly this one in real time. In fact, do it for real at night when you might be a bit tired. Fatigue matters.

While this challenge leans on GPS, make a habit of backing up your GPS navigation with the appropriate VOR, if only for situational awareness. Backup navigation is baked into IFR and is occasionally critical.

Oh, and you’ll need lots more charts than we have space to depict here.

Assume you filed direct because ForeFlight said ATC blessed that route once before. Your clearance comes back BUELT4.FLW, direct. Climb and maintain 9000. Fine. That’s no big deal. (And with a chart and GPS, it’s sure easier than the textual ODP.) Before you go, decide what approach you’d fly back into KSMX if you had to and load it. Then depart Runway 30 and fly the departure with the transition to FLW.

There are two approaches into L45: The RNAV Rwy 34 and the VOR/DME Rwy 34. The former starts at TAFTO and the latter starts at WOGIG. Neither is a convenient airway transition from FLW, so it’s GPS direct time. Might as well make that to TAFTO for the RNAV approach as it’s shorter and has lower minimums. And why fly an arc if you don’t have to? Fly the approach, but with a catch. ATC won’t let you descend below 9000 until crossing TAFTO, because, you know, hills.

Work your descent and try not to fall behind. Practice real world and remember to turn on the lights as you make a final descent. Land as befits the conditions and taxi to the ramp. Get ready for the return trip either tonight or a subsequent evening.

For the trip back you try direct again, but ATC gives you STIGR2.STIGR KOAKS (on the KSMX backcourse), climb and maintain 10,000. (Fun fact: Want to quickly remove the procedures you loaded into a Garmin GNS or GTN navigator flight plan? Invert the flight plan. This also works in ForeFlight and Garmin Pilot.)

Load and review the procedure, and then fly the departure. Assume you can depart STIGER on course once above the OROCA and that once you reach 10,000, you get direct KSMX (thank you, GPS). Pick whichever approach you think will work best on this night IFR flight.

We’ll give you some help picking an approach to KSMX: The RNAV 30 isn’t going to work. Its minimums are too high. It’s not aligned with the runway, which counterintuitively is what allows straight-in minimums because it avoids the tallest terrain and allows a shallower descent. But it’s still pretty steep and landing Runway 30 (and Runway 2) from those minimums is NA at night (even with a PAPI to protect you once you get within 10 degrees of final).

That still leaves you options. You have a GPS, so assume ATC clears you direct to the fix of your choosing, but keeps you at 10,000 feet until either the first fix on that approach or until you’re within 10 NM of the airport, whichever happens first. Fly the approach and land.

Whatever you chose, it was surely sketchy. Or maybe you decided to skip flying back into KSMX altogether? A smart pilot might fly a simple RNAV approach to San Luis Obispo (KSBP) and spend the night.

But, hey, you’re the virtual PIC.

Did You Consider This? 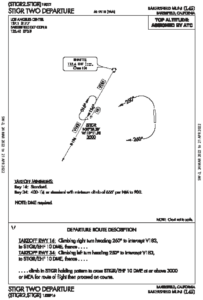 Let’s discuss some of the challenges and decision points we saw. If you haven’t yet tried this in your favorite sim, or at least worked through it from your easy chair, you should stop here and give it a try first.

1. What approach did you load into KSMX for your departure? Was that decision influenced more by the path you’d be departing or the safety of the return? Did the winds figure into your decision? What about the ceilings?

2. When did you start your turn to 190 degrees? The gradient to 1900 feet is 317 feet per NM. What’s required after that? The Fellows (FLW) transition has a notation to be at or above 8500 past BUELT, but the minimum climb gradient won’t get you that high. Did you catch that? What do you do if you arrive at BUELT below 8500? Can you accept this SID if you can’t meet these gradients?

3. Presuming you cross TAFTO at 9000, can you even make the required descent? How would you do that? Mental math? Technology? (Hint: How far is it from TAFTO to APCUD?) And if you fly the VOR/DME, where’s WOGIG, anyway?

4. Suppose you tune the weather per the RNAV Rwy 34 chart at L45 and it says, “overcast 400.” (This is a bit lower than your sim is set, but go with it.) Is this above minimums for you? (Assume stable, uniform cloud bases.) The approach has no vertical guidance, but your GPS might offer it using a three-degree glidepath. How far would you be from the runway when you reached MDA on such a path? Would you see the runway if visibility was only one mile? Would you be vertically centered on the PAPI?

5. What would you load for an emergency return into L45 if you depart Runway 34? Yes, there are only approaches to Runway 34, but perhaps you have other options, hmm?

6. The STIGR 2 requires 555 feet per NM initially. Must you have that kind of climb power? If you fly the heading shown to intercept EHF R-196, which way would you turn to reach STIGR? Can you just go direct? How did your GPS handle this situation? What would you do if you had to hold?

7. Which approach did you fly into KSMX and why (or not)? 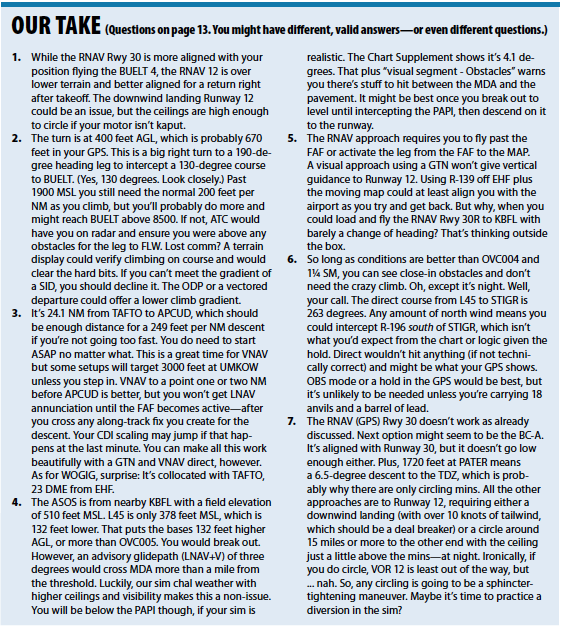