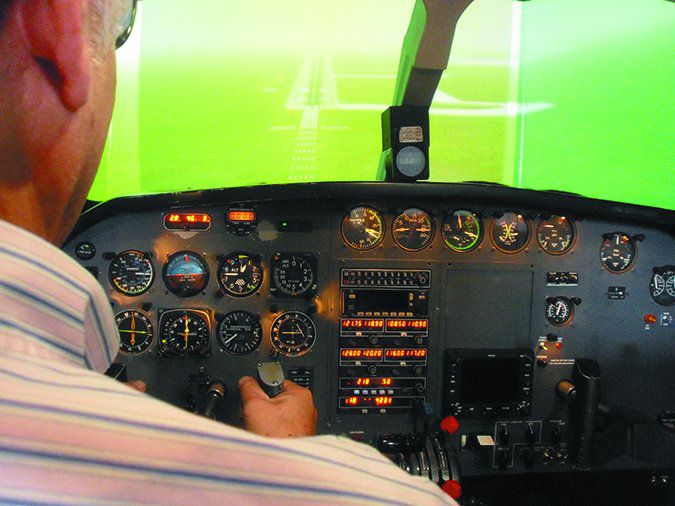 On these pages we’ve repeatedly emphasized the benefits of simulator training. It’s something in which we believe quite strongly. In a simulator, you can more safely explore the edge cases of flight than you’d ever consider tackling in an aircraft—until the aircraft presents you with one of those edge cases by surprise.

Plus, simulator training is far more efficient in time and cost than an aircraft. Yes, sim training is an all-around win. However, if you don’t have your own sim (see “Cockpit Proficiency” in August 2016) and your local FBO doesn’t have a suitable one, where do you go?

SIMCOM probably holds the top spot of the next tier, focusing on smaller corporate and pilot-owners with significant jet and turboprop offerings, but still offers piston sims all the way down to the Bonanza and Piper Saratoga. SIMCOM training is top tier, but their business model recently seems to mirror the big corporate centers with pricing to match. While a light- to medium-piston-twin pilot or even a single-engine pilot will likely find quality offerings at SIMCOM, class pricing can leave the pilot breathless, especially if you’re on an annual recurrent schedule.

Next up are facilities that focus primarily on piston pilots, both twin and single-engine. Probably the largest and best known of these is Recurrent Training Center (RTC), based in Champaign, IL, but now also with a facility in Tampa. Just up the road a ways in Aurora, IL is a lesser-known facility, Glass Simulator Center, that has a similar focus primarily on piston aircraft.

Rounding out the offerings are local facilities that have grown either from an FBO or a small flight school, but who offer formalized (and insurance-approved) training programs.

I’ve confessed here that I took a one-year hiatus from flying. Furthermore, I was woefully under-experienced in flying my own 1981 Cessna 340A. I knew I needed—and my insurance company required—recurrent training before I dared take the controls of the complex, pressurized piston-twin. Many years previously, I’d been to SIMCOM and RTC. I’d more recently attended Glass Simulator Center. For this article I wanted to again visit SIMCOM, RTC and try out a local facility. After many weeks of trying to connect with the right person, SIMCOM declined, further suggesting they viewed themselves in a different stratum.

Most simulator programs require three days for initial training and two days for recurrent. I’d attended both at RTC and found their primary merits being lower cost and insurance acceptability, but I found the materials somewhat lacking. Not long ago, however, they started offering a one-day recurrent that required the student to prepare by going through all the classroom refresher training on-line, thus requiring just a single-day to visit the center for sim training. This is quite appealing to the busy professional who needs recurrent training. Assuming that it would be of interest to you, I requested that course from RTC for my 340 so I could report on it, and they graciously agreed to host me.

I also reached out to a local facility in Southern California, Aerial Sim Training, as a representative sample of what one might find closer to home. They are a well-respected facility offering a number of formal courses. They’ve also agreed to host me to sample and write about their training, but as yet scheduling difficulties haven’t allowed me to attend. Hopefully, I’ll report on Aerial Sim Training in an upcoming article.

RTC’s one-day refresher training for the Cessna 340 requires about eight hours of self-study using web-based material with an extensive question/answer format. The review material covered what I’d call a mix of flight review material (charts, regulations, general operations and safety concerns), instrument proficiency items, plus a review of the aircraft itself, ranging from weight and balance through performance to systems. Along the way, helpful general advice and operating tips punctuate your progress.

The Q & A format is graded, but is considered train-to-proficiency. This means that if you get something wrong, you get to review it and try again. This is typical of most training programs today where the objective is sharpening a pilot’s knowledge and skills, not drawing a line in the sands of performance.

In contrast to the in-class self-study I’d received in previous trips to RTC, this approach was refreshing. For one, it was conducted at my own pace; I could work on it whenever I had the time without having to carve out an entire day. In addition, I found the on-line format to be more educational in that if there was an area where I wanted (okay, needed) to concentrate more, I could without worrying about a slipping schedule.

My on-site simulator training followed a predictable path. We started with some familiarization items like a normal take-off—good luck with that; the sim I used was hyper sensitive on the rudder, resulting in wild runway excursions most of the day—and some steep turns, stalls and the like. This was followed by abnormals and approaches, with increasing difficulty. By the end of the day, we’d covered a comprehensive equivalent of a flight review and an instrument proficiency check.

First, RTC isn’t particularly easy to get to. I went to their original facility in Champaign. In previous visits I’d flown commercially through Chicago—seldom a pleasant experience—and caught a regional flight to Champaign. This time I decided to avoid that intensity, instead flying commercially into St. Louis and renting a car. Either way, travel to Champaign is less than convenient. Of course, you can fly privately to Champaign, making it somewhat more accessible.

Most of my observations from my previous visits to RTC were reinforced in this visit. Notably, the curriculum appears to be constructed with economy in mind. Granted, one of the elements of RTC’s success is that they work diligently to keep the costs to a minimum, an example of which is their creation of the one-day recurrent training. Nonetheless, their material is quirky, even amateurish in many ways. For example, when answering the questions, sometimes you had to press a button for a grade and another to go to the next page. But, sometimes it just launched to the next page on its own. In addition, there were many typos and minor inaccuracies in the material and a few glitches or irregularities in the behavior of the courseware.

Was this a problem? Well, for me it was an annoyance, but I’ll concede that I’m probably far more critical of this level of quality than most students; it detracted a bit from what otherwise could have been a more valuable learning experience, instead turning it at some junctures into merely an exercise to be completed.

Nonetheless, it was a satisfactory review. I did relearn the systems and the aspects of a BFR and IPC that I was lacking. Given the economy of time and cost, for most attendees this would probably represent a suitable tradeoff. Also keep in mind that I had no recent experience in the aircraft but was attending a recurrent class targeted more at the active flyer.

Similarly, the sim I used got the job done but was quirky in places (like the rudder oversensitivity on the ground). Nonetheless, the entire experience did serve to knock the rust off my memory and skills.

One area that was a disappointment, however, was in procedures. During our initial chat, my instructor asked me what my objectives were. I carefully explained that while I was undoubtedly rusty on my instrument skills, what I most needed work on was procedures specific to the aircraft. I offered a list of items that ranged from power settings to pressurization to leaning and use of cowl flaps with autopilot usage along the way. Yet, in the sim all but the power settings were forgotten in favor of getting through the prescribed number of approaches, engine failures and other emergencies.

RTC clearly provides value for the money. However, in comparison to, for instance, time I’d spent years ago at the far more expensive SIMCOM training, the results were more perfunctory. If I’d been flying my 340 regularly and generally felt competent, RTC provided the recurrent training and edge-of-the-envelope experience that one needs at least annually to meet insurance requirements. I’m certainly grateful for the improvements I achieved through my RTC training, but a truly rusty pilot—as I was—should be prepared to seek additional training.

To be fair, though, even if I’d spent three full days and repeated my initial training, regardless of the facility I’d attended, I’d still have required supervised time in my aircraft before achieving an acceptable level of competence. Regardless of how prepared I felt after my brief class at RTC, I did get enough to go out in the aircraft to get the remainder of what I needed. So in that regard, it was a successful training component of a larger training program—probably the best use of simulator training to get back in the saddle.

Frank Bowlin has now logged enough hours and additional supervised training in his airplane that he’s beginning to again feel comfortable at the controls.