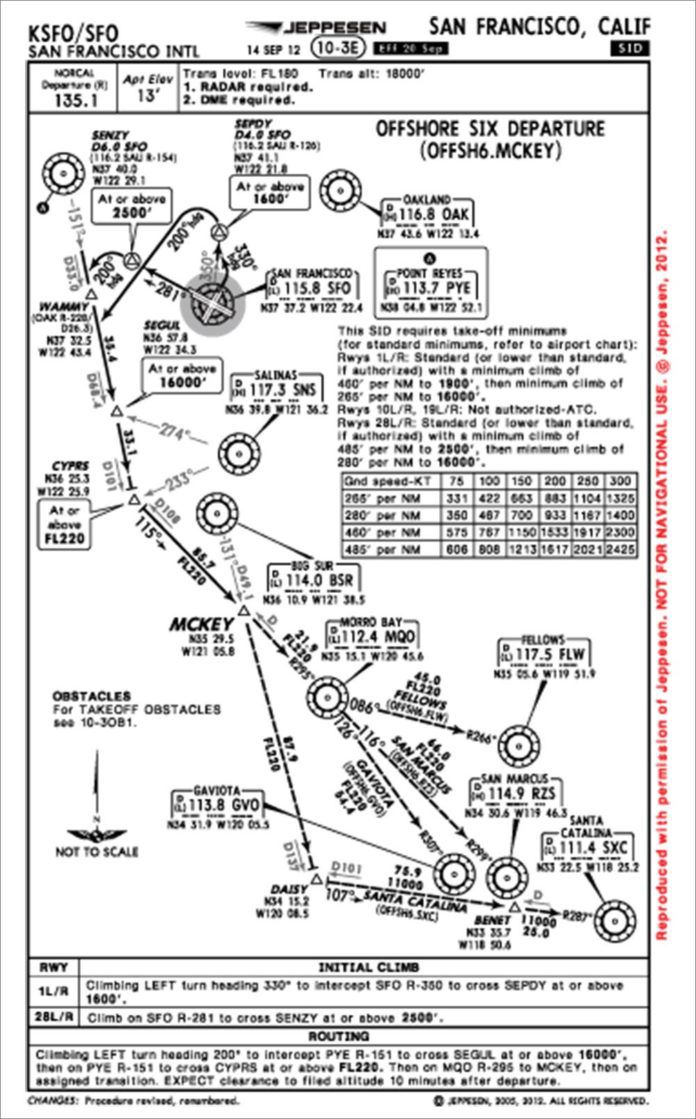 Fly IFR in busy airspace and eventually you’ll have one of those “much ado about nothing” experiences. It starts with a clearance you dutifully put in your navigator—and then repeatedly change or completely ignore until you get a clearance to resume the plan you were given at the start.

Sometimes I think the controller has a camera in the cockpit and tells the guys next to him, “watch how many buttons he pushes when I say this.” It’s enough to make someone envious for a couple VORs when each change was just a peek at the chart and a twist of the dial. Or just tell them “I can’t do that.”

Departures on Paper
Frank Bowlin, this mag’s new captain, suggested we review the San Francisco OFFSHORE SIX. The briefing of the procedure is pretty straightforward.
Launching off San Francisco’s Runway 1L, you intercept the SFO VOR R-350 until 4 DME and at least 1600 feet. Then turn left to 200 and continue the climb. Intercept the Point Reyes VOR R-151, cross SEGUL at 16,000 or above, continue to CYPRS, MCKEY and the assigned transition route.
Feeling a bit behind following that logic by what it says on this Jepp chart?

Let’s get this cleared up before you try it with your hands full in the TBM you just bought from the real estate agent who lost his shirt. Chart space is tight in the upper left corner, so the “A” ball flag on the VOR tells you that the identifier is elsewhere. Look under the MSA circle this time, but it could be anywhere there’s open space on the chart.

Similarly, the “At or above 16,000” flag at the intersection south of WAMMY pushed up the name of that intersection, which is SEGUL so it’s tough to tell what it references. Call this a good reason to walk through the whole departure before you fly it. ATC could easily assign a different altitude for crossing SEGUL and telling the controller you don’t see that fix on the departure you were assigned wouldn’t earn you any points.

The Pixelated Version
Your tricked-out TBM won’t use plain VORs to fly this. It’ll rely on GPS and the entire procedure will be called up right out of the database. You’ll load it before you go and be able to find SEGUL right there in the flight plan.
Notice the SEPDY and SENZY in the departure. These fixes are there for RNAV users. They used to be in brackets but now are depicted as shown.

Controllers usually don’t know they exist and won’t create a clearance using one. But you’ll see them because the GPS needs them to make that first turn.
When you load the departure, you’ll be prompted to enter the departure runway. Entering either of the Runway 1 options will put SEPDY in your flight plan because that’s the first point in space the GPS will take you.

The turn is problematic as you must be above a certain altitude before you do it, so there’s no specific route over the ground—the GPS won’t know how to guide you until you actually get there and it sees your position and velocity. This means your flight plan will have a gap in it until you actually cross SEPDY. Then the GPS will calculate the turn and show it. Your autopilot with GPS steering can fly it, and you will be taken to intercept whatever leg of the departure is needed. From there it’s a normal flight plan.

Real World Medley
But Frank says the odds are less than one in 10 you’ll fly it that way. After the procedure-mandated intercept of SFO R-350 but before the turn at SEPDY, you’ll get a vector. You might get several. These will be more aggressive versions of the left turns and climbs you see on the chart along with the requisite callouts for all the traffic you’ll see (or hope you see) in NORCALs fun-filled airspace.

At some point you’ll get a clearance like: “… Fly heading 165. Climb and maintain FL220. Intercept the OFFSHORE departure …”

Intercept the departure? Oh, right. We were flying a published departure. Now is when you need to know what you’re GPS does when it gets interrupted. Maybe the TBM was done on the cheap and a couple Garmin GNS 430Ws were kept in the panel. These units still expect you to cross SEPDY and will wait all day, unable to catch up to your new situation.

The fix is usually a simple activation of whichever leg of the departure your ATC-assigned heading will hit. It might take some extrapolation using the map, but you can handle that can’t you? Be wary of just activating the leg and letting the autopilot intercept in a nav mode rather than maintaining a heading mode with nav armed. The 430 will turn to make a 45-degree intercept if left to its own devices.

Maybe you went touchscreen and have a new GTN 750 driving the show.

Won’t it be smart enough to realize you’re not interested in SEPDY anymore?
Nope. You’ll need to activate a fresh leg on this one as well. That’s unless you get within a couple miles of SEPDY in your climb and turn, because GPS waypoints are usually fly-by not fly-over, and SEPDY is no exception.

The takeaway is to know your system and watch where it thinks you want to go next. If you have different plans, know how to get the navigator on the same page as you and Departure. That way no matter how ATC augments and wrangles off the published departure, you can say, “Sure, I can do that.”
Jeff Van West lives, flies, teaches, writes and used to edit this magazine in Portland, Maine.