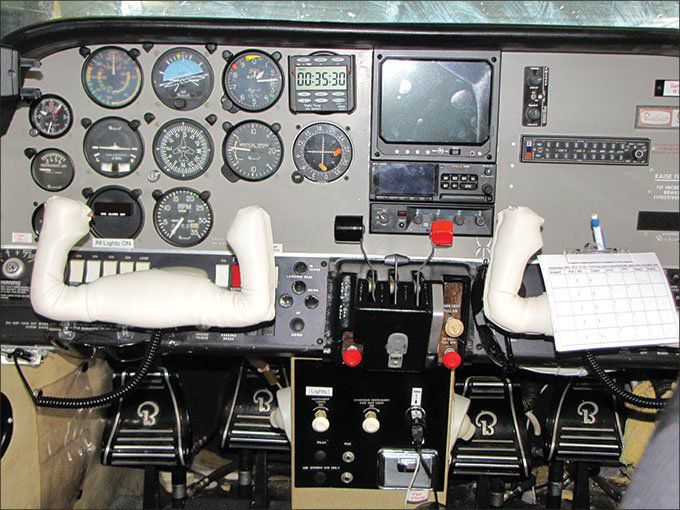 Offering his Beech Sundowner as an example, he asked our opinion as to whether it was suitable for both. Working from the general toward the specific, here’s our analysis.

The Practical Test
The FAA Instrument Practical Test Standards requires flight instruments for controlling the aircraft without outside references. However 91.205 (d) specifies additional equipment required for IFR which we condense into the memory aid GRABCARD—generator, radios, alternator, ball, clock, attitude indicator, rate of turn indicator, directional gyro. Note that the clock is supposed to be built into the panel, not a wristwatch. The gray area central to this issue is 91.205 (d) (2) which specifies “two-way radio communication and navigation equipment suitable to the route to be flown.”

GPS equipment must be IFR certified and contain the current database. If the equipment is retrofitted, there must be a Flight Manual Supplement that permits specific approaches with the installation.

If an autopilot is installed, its use is expected during the test not just to manage the aircraft but also to shoot one nonprecision approach including using the FMS if equipped. The examiner is expected to orally and practically test the applicants on these systems.

The old dodge of placarding an autopilot or ADF receiver inoperative does not work anymore. The PTS says: If any avionics/navigation unit, including GPS, in the aircraft used for the practical test is placarded inoperative, the examiner will review the maintenance log to verify that the discrepancy has been properly documented.

Nonprecision approaches should have no vertical guidance, thus excluding the LNAV/VNAV and LNAV+V approaches. Two different types of navigational aids must be used, such as NDB, VOR, LOC, LDA, GPS (LNAV or LP), RNAV or an LPV with minimums above 300 feet. You may have to find a non-LNAV+V approach to shoot because the GPS may not offer only the LNAV.

As Lee Smith wrote in his June, 2013 article, “Advisory Glidepaths,” the FAA is beginning to add the note “Descent Angle NA” and remove vertical descent angle data from approaches lacking obstacle clearance below minimums on the vertical descent angle. If no VDA value is on the plate, there will be no vertical (+V) advisory guidance.

If an approach says ADF REQUIRED or DME REQUIRED, your IFR GPS is an acceptable substitute. It is even a legal substitute for any DME or ADF, whether on an approach or not.

The general practical test rule is simple: If it’s in the airplane and functioning, it’s testable. This also works for you. Use the autopilot to relieve workload or use an OBS ring to calculate a hold, figure a timed turn or mark an altitude.
On a checkride you can theoretically get by with one COM and one ILS-capable NAV. Using cross radials for stepdown fixes and intersection holds calls for flipping the NAV frequency back and forth and frantically spinning the OBS while trying to hold or shoot an approach. If you can pass a flight test this way, I think you deserve a medal. On the other hand, the examiner might question your judgment in selecting so minimally equipped an airplane for the test.

Practical Flying
Today many IFR pilots will not fly single-pilot IFR without an autopilot. Having GPS is assumed. Given that mindset, flying an airplane that minimally satisfies a flight test comes nowhere near meeting the bar for practical IFR flight.
Dual NAVs and COMs have long been the IFR standard for convenience and redundancy. DME is a big plus. It requires no database maintenance and isn’t being decommissioned like VORs. Most of us can—and should be able to—manage without GPS or autopilot. Indeed, many pilots have flown years of safe IFR this way.

But today, ATC assumes you have GPS. I was once in a /A airplane and got cleared direct to a fix over a hundred miles away. After repeatedly stating “UNABLE,” I finally said I could get there on a heading from our VFR GPS. He gave us that heading, making it legal, but it was tedious.

Omitting GPS IFR training, although perfectly legal, is a disservice to the student. The system is rapidly becoming GPS-centric. Why not learn it up front?

It adds up to “best-equipped, best-served.” In 2020 we will need ADS-B Out or there will be no IFR service, just the same way that VORs became the prerequisite for IFR service decades ago.

Henry’s Sundowner
Henry wrote that his Sundowner has a Garmin GX60 GPS which is nonprecision, IFR certified and contains a flip-flop COM. The GX60 drives a VOR CDI and glideslope needle. The glideslope needle monitors vertical descent navigation which can be configured in the GPS, but is not an approach advisory GPS glidepath. There are no VOR or glideslope receivers aboard.

This equipment does not meet even the minimalist requirements of the PTS. He can shoot LNAV or GPS overlay approaches, perform holds, DME arcs and navigate IFR from fix to fix, or he can go direct. The GX60 also offers OBS mode, a clock and countdown timer. His audio panel has a marker beacon receiver—a capability of diminishing value.

What’s lacking is VOR/LOC and glideslope receivers that he could couple to the NAV. Minimal as it is, this would suffice for training, but I would certainly not recommend so demanding a setup to a new instrument pilot in weather.

A much better idea would be to add an integrated NAV/COM like the venerable King KX-155 or Garmin’s SL 30 or the new GNC 255. In one box he would gain a VOR, localizer and glideslope, plus an additional COM.

Henry could fly another airplane for his training and checkride. However, he would surely prefer to train in his Sundowner which he will eventually fly IFR alone—a very safe first step.

The COM antenna can be shared between the two COMs with an antenna relay or passive splitter. The somewhat preferred alternative, though, is to install another antenna for complete COM redundancy. If the airplane permits, the second antenna should be installed on the opposite side of the fuselage (bottom vs. top) to provide maximum isolation so that transmitting on one radio won’t saturate the receiver on the other.

The result is dual NAV/COMs with full ILS, LOC and VOR approach capability along with his current GPS. For a total investment of maybe $4,000 he would have a safe airplane that will be very pleasant to fly IFR. Hey, Henry, isn’t that what this is all about?