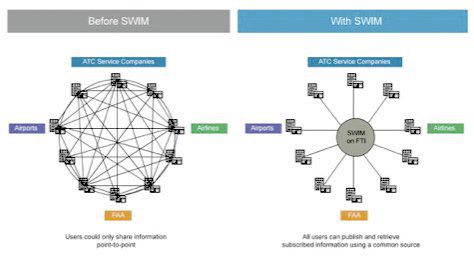 NextGen’s prime objective is to improve the flexibility and efficiency of our National Airspace System (NAS) to accommodate increasing traffic. This is possible only if your trip receives NextGen support from preflight to engine shutdown. Called trajectory-based operation or TBO, you will one day preflight by selecting one of several near-optimal trajectories accounting for weather, traffic, obstructions, special use airspace and more. Nice, eh?

The FAA forecasts that U.S. airline travelers will increase over 50 percent by 2038. The current ATC system would sink. Legacy FAA systems are a hodgepodge of independent systems with limited ability to participate in the kind of data sharing required by TBO. ATC’s tools from yesterday are just not up to the tasks of tomorrow.

SWIM will give all consumers, meaning the FAA and us, identical situational awareness. NextGen information will be published and retrieved using a common source such as NAS Common Reference (NCR) software. Pilots filing a flight plan will be able to ask the system about their intended travel for any notices or constraints, such as runway or airspace closures or severe weather.

FlightAware.com uses SWIM now to power its web site. Airlines also use SWIM so you can check flight status or view a map of a flight’s location.

Access to SWIM will be through third parties like airlines or flight tracking providers like FlightAware. Registered consumers now number about 140. They can access over 100 SWIM products, categorized as aeronautical, flight and traffic flow, and weather.

SWIM will be available in GA cockpits and will offer us the latest traffic flows, NOTAMs, and weather. The big picture will help us anticipate if and how the current situation will affect our flight and how to avoid traffic bottlenecks.

NextGen and SWIM look at your flight end-to-end, as you do. Former FAA administrator Michael Huerta said, “NextGen is like going from an impressionist painting to HDTV.”

The NextGen Weather Processor (NWP) produces four weather products for FAA traffic management systems and external users. The NWP assures controllers that the weather they see is what the pilot is experiencing. Controllers’ scopes will show storms without distortion, in the correct location, all the time.

After 2020, ADS-B may offer surface surveillance at thousands of airports. Controllers and equipped aircraft will see a display of aircraft and vehicles on the airport plus remote CCTV observation. Overwatch software will identify and alert aircraft at risk of a runway incursion.

Data Comm cuts across all phases of flight to make the most efficient use of airspace capacity. It triggers pilot action via pre-scripted email-like messages that appear on a display page if the aircraft is suitably equipped.

Press a button to accept or reject the action. Accepted instructions are loaded into your navigation system. A controller can even send revised clearances to multiple aircraft quickly. This works especially well when active runways change with no notice due to weather.

Today, 57 towers can issue departure clearances electronically to suitably equipped aircraft. Data communication will supplement voice by becoming the principal means for normal coordination and clearance revisions. Automation provides controllers with dynamic and optimal arrival and departure routes that can be sent electronically and loaded into your navigation system.

In 2019, Data Comm in centers will be capable of reroutes, basic controller-initiated routes and ATC instructions. A controller will also send new clearances based on standard routes in your navigation database. Traffic-flow management will reduce delays and bypass weather.

One day, navigation systems with TBO capability will send aircraft performance and projection data to improve demand predictions, giving FAA and flight deck automation identical views of the intended trajectory. This will improve the accuracy of the trajectory and enhance strategic planning.

In a TBO world, bad weather, heavy traffic, and special-use airspace, cause routes to be tweaked early to minimally reroute traffic. The result maintains flow without vectors or conventional STARs, both of which require traffic-management initiatives that constrict traffic flow.

An aircraft’s four-dimensional trajectory consists of its location including latitude/longitude, altitude and time. If the trajectory assigned by ATC is optimal, subsequent ATC intervention would make it suboptimal.

Obviously, the system’s goal is allowing an optimum trajectory as long as possible. To do so, the aircraft must arrive on time at each waypoint. The result is greater airspace capacity, efficiency, minimized flight times and predictability because trajectories are foreseeable and coordinated.

NextGen accommodates users who may not have the gear to fully utilize it. SWIM will seamlessly incorporate the inevitable equipage variations.

TBO can only fulfill its potential if NextGen support exists from the time you file a flight plan until engine shutdown. The lack of a single situational view today forces air traffic management decisions to be made piecemeal, that is, for portions of a route rather than the entire route.

You’ve almost certainly seen it yourself. A helpful controller gives you direct to a fix many miles down the road. A few controllers later, though, you’re rerouted around some active military airspace. If you’d been left on your original route, you’d have avoided that airspace—you planned and filed it that way—with even a shorter route overall. The first controller was just trying to help, but she didn’t have the full picture.

Today we make operational decisions based on whatever weather sources we use, which may not mesh with what the FAA sees. Nor do we have insight into airspace capacity vs. demand. We take whatever route ATC gives us.

In contrast, NextGen information will be published and retrieved using a common source through SWIM. End-to-end trajectory operations could not work any other way.

During flight, automation will help controllers modify your routing due to weather or congestion. As PIC, you’ll select the reroute that best fits your needs, but chances are what you’re offered will already be optimized for your capabilities and requirements.

When you file, you get a strategic big-picture flight plan. Tactical route planning incorporates weather, traffic delays or other factors that might change your strategic route. The idea is to minimize these, and especially vectors, which consume extra airspace and can have an adverse domino effect on other traffic paths.

All this will be more efficient with Data Comm. This safety-critical link will permit the automation to give the FAA better information regarding the need to initiate traffic management and will adjust more quickly to changing conditions.

For instance, the effects of a delay can be minimized by sharing that delay between multiple aircraft. Arrival delays can be absorbed further back in the system, avoiding arrival bottlenecks.

PBN (performance-based navigation) waypoint connect-the-dot route structures will be the norm and point-to-point routing will be used when possible. PBN routes are dynamic because they can change during a day based on airspace conditions such as weather and predicted demand.

Time-based sequencing and spacing are essential to trajectory-based operations. Airborne and ground-based automation will help this work and keep aircraft on optimized routes. Controllers will manage more aircraft and intervene less.

We pilots may assist in inter-aircraft spacing using ADS-B-In Traffic Information Service in our cockpits, possibly allowing closer spacing. Under certain conditions, spacing and sequencing could be delegated to the flight deck. Pilots would advise ATC only if their interval could not be maintained.

ADS-B Out increases the accuracy of target locations, and its one-second update rate is far more granular than the 5 or 12-second updates in terminal and en route radars respectively. Radar will provide backup and integrity monitoring. It may be needed in airspace where ADS-B is not required or unavailable.

ADS-B is ground-based technology. Service is largely unavailable in the mountains of the western U.S. and over-ocean. Circa 2025, space-based ADS-B could serve those areas, giving controllers additional traffic awareness and aid in search and rescue.

In the FAA’s ongoing efforts to increase IMC airport capacity, imagine flying an approach with an enhanced vision system using infra-red sensors. Alternatively, consider an approach based on synthetic vision. Both are being evaluated with minimums lower than those currently in use. Near zero-zero landings for well-equipped single-engine piston aircraft are not out of the question.

As NextGen fuses the data that supports air and ground systems together, a seamless safety network will emerge.

The Chicago Center fire in 2014 downed it for 17 days. The event dramatically illustrated the need for better resiliency. Accordingly, the FAA plans to use NextGen so that a facility can access another facility’s surveillance, communications and flight plans, enabling rapid service resumption at another location.

Safety will increase due to ADS-B’s native superiority over radar. New decision support software will help controllers make sound decisions. On the flight deck, a new traffic collision avoidance system, ACAS-X, represents the next evolution in collision avoidance. We will benefit from better navigational accuracy, performance monitoring and alerting.

Taken together, completion of milestones by 2025 such as deploying Data Communications and expanding PBN will represent a major achievement for NextGen with a lot more to come. Beyond 2025, look for enhanced service delivery, expanded equipage, advanced applications and new capabilities. Can you imagine a controllerless tower? While that might make tower visits problematic, it’s something being investigated.