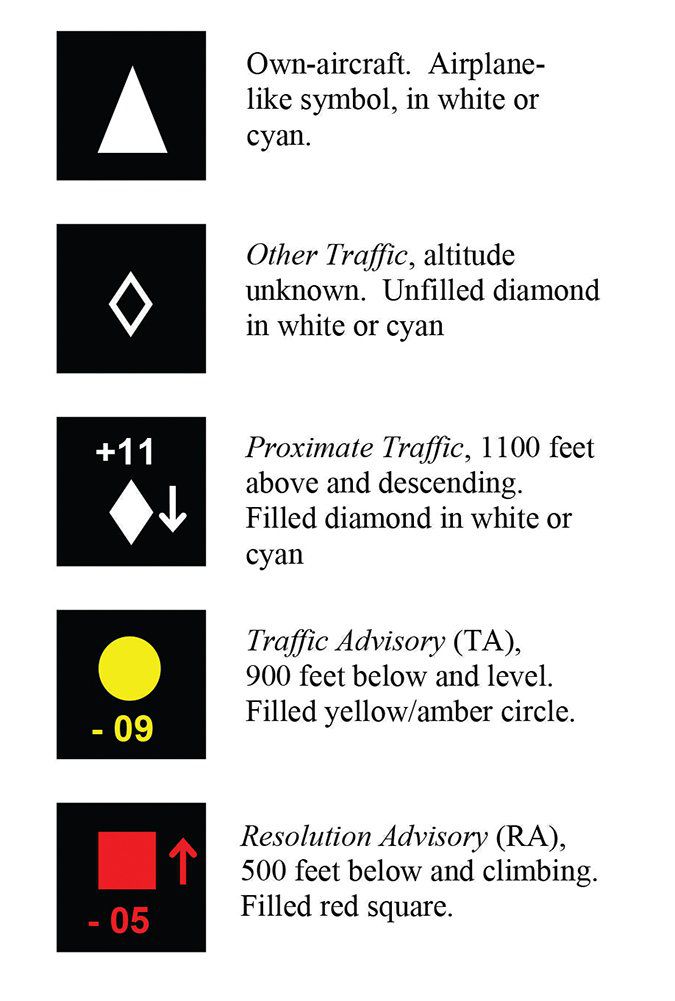 Marginally effective, see-and-avoid is based on the big sky theory; the sky is big and airplanes are small so the chances of running into each other are minimal. Our vision limitations in an airplane combined with massive blind spots foreshadow disaster. In 2014, pilots reported 163 near mid-air collisions. Most involved GA. Who knows how many occurred without either pilot realizing?

Mid-air collision possibilities frighten every pilot and have shaped aviation. The first occurred in 1910. In 1956, United 718 and TWA 2 collided over the Grand Canyon. The accident “led directly to legislation creating the Federal Aviation Agency,” according to the FAA.

More recently, a PA-32 and Eurocopter collided over the Hudson River, killing nine. The collision of two skydiving planes a couple of years later made spectacular video, while parachutes allowed everyone to get out with their lives.

Fate can only be tempted so long before it catches its prey. Yet, regulations still rely on see-and-avoid, IFR or not:

When weather conditions permit, regardless of whether an operation is conducted under instrument flight rules or visual flight rules, vigilance shall be maintained by each person operating an aircraft so as to see and avoid other aircraft. (14 CFR 91.113(b))

In the past, those who wanted improved traffic information either had to request radar traffic advisories or spend big bucks on a TCAS system.

Innovation is bringing traffic information to more pilots. Let’s take a look at the systems, how traffic is displayed, and what to do as a pilot. Experiments on the Cockpit Display of Traffic Information (CDTI) might even have you calling traffic in IMC before you know it.

The FAA expertly manipulates aviation with carrots and sticks. It’s used both with traffic systems by mandating TCAS and funding TIS, TIS-B, and ADS-R to reward early adopters. Let’s look at the terms and systems. Warning: Severe acronym storm ahead.

The first widely implemented airborne traffic system, TCAS is the touchstone that all systems reference. It interrogates surrounding transponders much like ATC secondary surveillance radar. The system must have a 14-mile range, but most extend to 40. Traffic without transponders is invisible to the system and those without mode C obviously don’t report altitude. Ground-based systems and radar aren’t required.

Two versions of TCAS exist. TCAS I only provides traffic alerts (TAs). TAs are audio (“Traffic, Traffic”) and visual alerts letting the pilot know that another aircraft will come too close on its current trajectory. TCAS II has both traffic alerts and resolutions advisories (RAs). When traffic gets really close, an RA commands a vertical flight path (only—no turns) that keeps the aircraft away from conflicting traffic.

TCAS prices range from $30,000 to hundreds of thousands, putting them economically beyond reach for most piston aircraft. The FAA recognized this and created a TCAS-lite targeted at GA called a traffic advisory system (TAS).

TAS works like TCAS I but without the power or display requirements making it less expensive. There are two classes of TAS. Class A systems have a traffic display and aural alerting (that cool “Traffic-Traffic”). A Class B system lacks the traffic display, having only aural alerting and annunciation. TAS systems aren’t cheap either. Avidyne’s Class A TAS starts at $8,500.

A cheaper alternative, but one that never took off, was traffic collision avoidance devices or TCADs. A TCAD is similar to TCAS/TAS, but is passive. TCAS and TAS actively interrogate other transponders while TCAD just sits back and listens for transponders that were interrogated by either ATC or a TCAS/TAS system on another airplane.

While TCAD takes advantage of ATC radar, Traffic Information Service (TIS) is completely dependent upon it. The AIM describes TIS as “similar to VFR radar traffic advisories.” (4-5-6) The system takes what ATC sees on its (ASR-7/8 or ASR-9) radar and transmits it to your Mode S transponder. It only has a 55-mile range.

If approach’s secondary surveillance radar cannot see the traffic, there’s nothing to transmit via TIS. Additionally, the system only displays the eight “most significant” intruders. Since it’s dependent on ATC radar that sweeps every five seconds, the information is inherently old. TIS uses prediction algorithms to approximate traffic location, but maneuvering or proximate traffic can be displayed incorrectly.

In 2008, AOPA reported that over 10,000 pilots had TIS and that it was the most affordable system available. Unfortunately, in 2005 the FAA announced that the “safety benefits of TIS did not warrant the cost to continue providing the service.” Therefore, as approach radar systems are updated to ASR-11 or later, TIS is no longer included.

A carrot to upgrade early to ADS-B is TIS-B. Traffic Information Service-Broadcast is similar to the TIS that didn’t warrant funding. TIS-B takes everything ATC sees (radar and ADS-B traffic) and broadcasts it on ADS-B frequencies. Traffic within 3500 feet and a 15-mile radius is broadcast to an aircraft. This protection zone is eloquently called the “hockey puck.”

TIS-B shares many of the limitations of TIS. Radar latency can lead to traffic position data that is up to 13 seconds old. It is also dependent on the receiving plane having ADS-B In and Out. If you fly with a portable ADS-B In receiver for traffic, it will only pick up another aircraft’s hockey puck. Therefore you might only see a partial picture of traffic. But, it’s still a good supplement to our vision.

ADS-B works on two independent frequencies. The system will only communicate on your one installed frequency, making aircraft using the other band invisible. This is solved by ADS-B rebroadcast (ADS-R). ADS-R simply broadcasts aircraft from the other frequency into your hockey puck.

Shapes and Colors and Arrows

While traffic system limitations are important, the key is knowing how information is displayed and what it means.

TCAS is the granddaddy traffic system, required for U.S. airlines since 1991. It sets the tone for how information is displayed. Other traffic, which is nice to know, is depicted as a white or cyan unfilled diamond. Proximate traffic is a filled white or cyan diamond, a yellow/amber filled circle is used for traffic associated with a traffic advisory, and a solid red square shows traffic that caused a resolution advisory. A traffic symbol will also have altitude information in either relative or absolute formats if the interrogated aircraft is squawking altitude. An up or down arrow appears if traffic is climbing or descending greater than 500 FPM.

Proximate traffic is within six miles and 1200 feet, but not a threat. TAs and RAs are based on a closest point of approach (CPA) based on time. (Provisions exist for slow closure rates.) An aircraft with a CPA of 20-48 seconds sets off a TA, with higher altitudes yielding the longer times. A target with a 15-35 second CPA sets off an RA in TCAS II.

ADS-B mixes things up. Traffic display standards for ADS-B traffic relay directional information by using an arrowhead symbol in either white or cyan. An altitude climbing or descending arrow, a directional vector line extending from the point of the arrowhead, and call sign are also shown for ADS-B Out traffic.

Non-ADS-B craft show as “Pacman” symbols with altitude and climbing/descending arrows provided by TIS-B. Ground traffic displays as brown/tan. Ground vehicles are also brown/tan as a top-view rectangle with “wheels” that take some imagination to see.

ADS-B allows aircraft surveillance applications (yup, ASAs) that, for example, can follow other traffic while IMC or let you climb through another aircraft’s altitude with minimal spacing. In ASA traffic is selectable to display additional information like groundspeed so you could follow a target.

Puttin’ It To Use

Once you have it, traffic information is a security blanket as important as a homesick three-year old’s “bankie.” In the hornet’s nest of today’s busy airspace see-and-avoid just doesn’t keep us safe anymore.

Technological advancements and the ADS-B mandate are making traffic information available to more GA pilots. It’s important that these new tools are used correctly. Unless a plane has TCAS II, traffic systems “must not be used for avoidance maneuvers during time when there is not visual contact with the intruder aircraft.” The AIM continues, emphasizing that pilots are still responsible to see-and-avoid other aircraft.

This is good advice from an ATC perspective. With TCAS, TAs occur regularly and RAs occasionally, even when ATC spacing is never violated. This typically happens with fast climbers and descenders and opposite-direction intercepts to parallel courses (like parallel runways). Planes deviating on their own for these controlled-but-close passes is the stuff of ATC nightmares.

Pilots must balance the responsibilities of complying with ATC clearance as required in 91.123, the right of way rules in 91.113, and saving your own bacon. The rules only allow two reasons for deviating from a clearance—an emergency or TCAS II RA. Note that TAS, TCAD and ADS-B don’t generate RAs and aren’t on that list, so if you deviate solely with one of those and without visual contact, you should be prepared to call it an emergency. The best way to deal with a potential traffic threat is coordination with ATC. Sometimes this isn’t possible and PIC authority must be exercised.

President Reagan famously turned a Russian proverb on the Soviets: trust, but verify. ATC does a great job of separating and sequencing traffic, but errors can occur and there are situations where controllers aren’t required to separate traffic. Technology is allowing pilots to trust, but verify, to prevent one of the scariest scenarios in aviation.

This summer Jordan Miller navigated hornet’s nests in the air and on the ground. He’s still traumatized, but trying to move on with bug spray and TCAS.