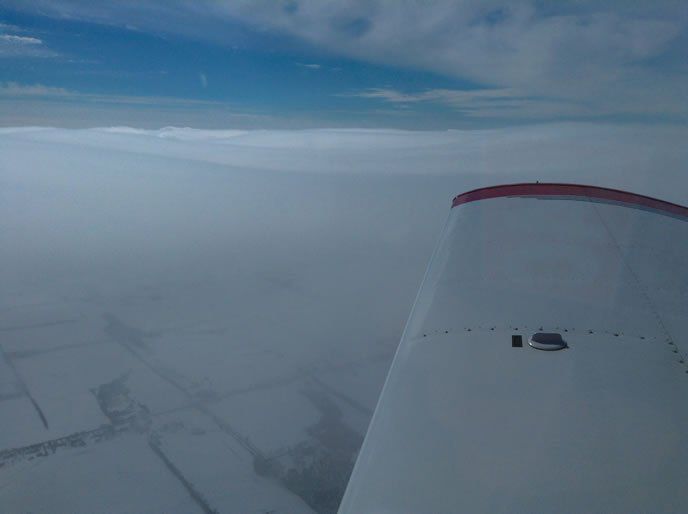 Many of our ranks are professional pilots because they simply love to fly. They find a way to fly no matter what. For them, retiring from a career in aviation simply means they no longer get paid to fly, but they’ll find a new ride. These are usually superb pilots—pilot’s pilots—but they can sometimes struggle when transitioning from a magic carpet with dual FMS, dual radar, dual engines, surplus power, autothrottles…and redundant redundancy. Of course, there are also many owner-operator pilots who fly sophisticated aircraft ranging from bizjets to piston twins who similarly find themselves looking for a new way to sustain that aviation fix as they retire.

That new way often requires relearning single-engine piston airplanes with yourself as a crew of one. In some aspects, you’ll be overqualified for your new duties; in others, well, perhaps not so much. Whether it’s a legacy model or a newer glass-and-composite airplane, you’ll want a transition program that fits your needs, fills the gaps, and leverages your years of experience.

So you picked out your personal travel machine and now a piston airplane with six or fewer seats will be a member of the family. Don’t be complacent about the apparent simplicity of the new aircraft. Just because you flew heavies—or King Airs—yesterday doesn’t mean you know what you need to know about your new single-engine piston. As with any aircraft transition, it’s to your benefit to study and get some training. Find an instructor who has some instrument time in your make and model. If your instructor has experience with the kind of flying you were doing before, even better. It’ll give you a common reference and you can even swap war stories.

If you’re still searching for your new ride, the choices are broader than ever. You’ve seen that modern personal aircraft can go faster and higher than ever, plus they come with good automation and are more efficient. I’ve worked with private pilots who’ve owned twins for years and are now moving into newer singles because they can get similar performance for less fuel, with less to manage in flight. Many legacy models have received avionics upgrades and so they offer even greater instrument-flying capabilities.

When you make your choice, get to know the POH. Moving from Jet-A to avgas? Engine management is an entirely different game. You’ll find that the handbook is a fraction of the size of the manuals you had to know in your job, which is good and bad. The procedures are simple, there’s less equipment to troubleshoot and it’s way easier to memorize flows.

On the downside, there’s not much detail. A typical light-aircraft POH has brief checklists for inspections, pre-takeoff and each phase of flight. Same with the emergency chapter. There are instructions for items like engine failure in flight, gear malfunctions, voltage overload and even “inadvertent IMC encounter.” However, there is little or no guidance on flight control failures, for example. Here’s where you’ll want to look to other resources, like instructors and pilots who are familiar with the aircraft. Oh, and practice. A lot.

The avionics you’ll be flying with could very well be newer than what you’ve been using, or at least quite different. In either case, your system will probably be surprisingly capable, but in some ways not as much as what you’re used to. There are plenty of discussions about pilots taking on too much airplane or automation for their experience, but the safety considerations are just as relevant when downsizing. The equipment could be unfamiliar, and the lack of automation and redundancy can bite you just as badly.

For example, unless you’ll be flying an airplane made in this century, your personal craft will likely have one avionics bus, one alternator, one battery. So a power failure in solid IMC could be catastrophic. Make your plans B and C with comfortable weather minimums, backup devices and careful contingency planning. The same goes for instruments. If you have legacy steam gauges, you get one vacuum pump and one of each gyro. For peace of mind, you may wish to install a battery-powered backup attitude indicator. (The digital versions are great.)

If you came from heavy iron, you almost certainly had two or more of everything, even the stuff behind the stuff on the panel. In your typical GA flivver, even one built yesterday, you’ve got one. When it breaks, you do without. Learn how and why it might break and what you can do about it.

I don’t know of any experienced pilots who downsized their IFR flying into something without a decent autopilot. Nonetheless, GA autopilots are a world apart from those in heavy iron. And never skimp on training for autopilot malfunctions, hand-flying and partial-panel approaches.

Every button, knob and switch is important, even the small or hidden ones. One commonly overlooked detail is knowing how to turn individual devices on and off, which can really come in handy for troubleshooting. For example, some navcoms have one on/off switch that controls both radios; some have a switch for each. Power switches on mounted portable GPS units can be difficult to find. The Garmin 696 comes to mind; you need to feel behind the rear corner of the unit and depress a switch that’s flush with the rear casing.

You’ll enjoy the charms of flying lighter, lower, and slower, but know what you’re getting into. When you’re ready to do some serious training, do the drills on crosswind takeoffs and landings, go-arounds, missed approaches and manuevering flight. Slow flight, stalls, engine-out simulations, and steep turns will help you get used to control and maneuverability characteristics and serve you well when flying on your own. Then, move into emergency scenarios such as autopilot and trim stalls, control failures and instrument breakdowns. By then, you should be having enough fun to move on to IMC unusual attitude recoveries and approaches.

Beware the performance tradeoffs. Now you can take off and land comfortably on a runway that’s not even a half-mile long. You’ll be able to circle to land in a tighter space using “normal maneuvers” per the regs. However, you won’t be able to go as fast, far or high. A typical single-engine airplane will fly for three to four hours before hitting the one-hour fuel reserve most of us like to have. A 30-knot headwind will greatly reduce the miles covered in that time. Get used to it.

There are plenty of considerations that don’t show up in the book numbers. You know you’ll be climbing at slower rates and slower speeds, but even more so when density altitudes get high. Hot, sticky summer days in the Midwest result in DAs of 3000 feet; you’ll see 8000 feet-plus in the mountainous states. And there’s no precise way to predict the performance, so don’t get caught in a corner when you launch at gross weight in your Archer and see a mere 300 feet per minute on the VSI. It happens, so build experience under suitable conditions and plan accordingly for when you could have an Obstacle Departure Procedure or missed approach to fly. Don’t forget that light airplanes come with light wing loading, so your tolerances for wind gusts and turbulence will come down considerably based on pilot and aircraft capabilities, as well as your passengers’ comfort.

You won’t reach the flight levels too often, if at all. So unless you have a pressurized cabin or an oxygen system, most cross-country flights will be below 12,000 feet, which means looking at weather differently. Climbing above bad weather will usually be impossible.

Same with ice. Getting above the tops isn’t always an option, so be familiar with your climb performance and service ceiling. The freezing level will gain a whole new importance to you as it’ll often be your savior. Avoidance followed by escape will be your only tools if your new ride came with nothing more than a window defroster and heated pitot tube.

If you have an ice-escape airplane like a second-generation Cirrus, you might buy a bit more time, but keep in mind that you get only 30 minutes of fluid. Plus, those composite wings don’t care for ice a bit. How about one of the new FIKI-certified models? You get well over an hour of time in the ice and more airframe coverage, but there are limits to what it can handle. “Moderate” icing reports mean “severe” to light airplanes, even those with FIKI. (When you’re on the ground removing ice mixed with anti-ice goo off the wings, you’ll remember that.)

Use the instrument proficiency check as a transition training checklist so you cover the bases in departures, approaches, partial-panel exercises, straight-in and circling operations. Speaking of checklists, you might want to make one tailored for IFR flights in your airplane by blending it into the regular checklist. As a career pilot you’re already a pro at checklists, so have at it. Items like setting up departures, arrivals and approaches in your avionics might need cheat sheets, along with speed and configuration callouts that you like to use.

Run through the normal, abnormal and emergency procedures for an IFR trip before you do it for real. And you’re now on your own, so rehearse procedures in single-pilot mode until you know you can manage whatever comes your way. Picture hand-flying to an alternate in turbulence and shooting an ILS approach to minimums after your only static port just iced up. Seriously!

Take what you just did and make it your recurrent training program. If you were accustomed to checkrides every six months, keep up the routine with your new airplane. It’s no exaggeration that pilots who fly for a living and undergo frequent recurrency training have far better safety records than their GA brethren, who might get a little bit of real training every two years. Use that to your advantage as you move into your new pilot duties and strive to maintain a high level of proficiency. Then go out and have fun.

Elaine Kauh is a CFII in eastern Wisconsin. She loves flying with airline pilots when they hop into anything under 6000 pounds.