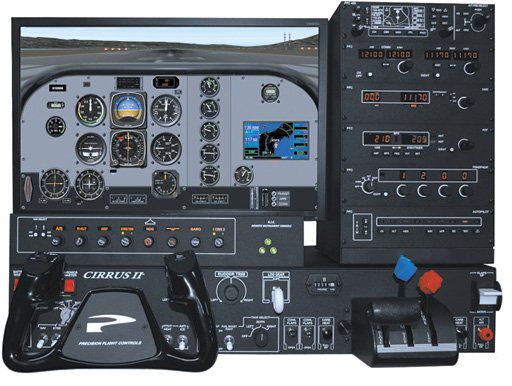 Let me start by referring you to my Remarks on page 2 of this issue. To summarize, I thought I had a certified sim coming, but that hasn’t materialized. So, I’ve begun to consider building my own simulator. “But,” you might argue. “You can’t log your time in that so you can’t maintain currency.” You’d be right, but there’s more to the discussion than that.

Do You Need Those Hours?

Let’s dig into the legality-versus-proficiency discussion. Say you fly an older high-performance single, like a Mooney or a Bonanza. You log perhaps 100 or so hours a year. You try to file IFR for most of your flying, but you really don’t get much actual IMC. Chances are you’re neither legal nor proficient six months after your last IPC. You’d like to fix that.

Unless you routinely fly with a safety pilot, you’re simply not going to get those “six-in-six” currency approaches on your own. So, you decide to get an IPC twice a year. While your insurance company might applaud you, and you are maintaining legality, are you really maintaining proficiency?

Sure, an IPC knocks off the rust and sharpens your skills, but is that enduring? Try this the next time you’ve lost currency: Get a thorough IPC. Then, two months later, get a safety pilot and go fly the same procedures, the same approaches (without the autopilot). How’d you do? I’d guess you were probably safe, but that you weren’t likely very precise in your execution.

Okay, we’ve likely just established that your proficiency needs more than an IPC twice a year. Now, what if you flew those same procedures every month, all the way to real minimums in “no guano, Batman, I can’t see the runway” weather? Do that every month and after a few months you’d be much more proficient for that exercise. If you do it in a sim, you don’t have to arrange for a safety pilot or an instructor, and you can do it whenever it’s convenient to your schedule.

You’re already maintaining legality with your IPC; you’re just flying that sim every month to maintain proficiency. Sure, it’d be nice to log those approaches so you wouldn’t need that IPC, but I’ve found that, although the sim does help you maintain proficiency, that IPC really rounds out the picture. Besides, if you’re flying the sim for proficiency every month, that IPC will be a lot easier, shorter, and cheaper.

We’ve just established that you can probably get by without logging your simulator time. But say you can’t get past the point of spending thousand dollars for a simulator without being able to log your time. So, for now let’s assume that’s a requirement.

You can get an approved Basic Aviation Training Device (BATD, in this case, with the emphasis on “Basic”) for under $7000. That’s not bad. If your airplane costs only $150/hour all in (really?), your break-even point is under 50 hours that you didn’t have to spend in the airplane. But, there are tradeoffs.

For that price, you might get a simulator that can fly (on the numbers) only as a basic, generic single-engine piston airplane. Other sims might model other or more aircraft. But the panels might only have six-pack instruments—fortunately including an HSI—and standard nav/com radios, possibly even lacking a GPS. You might be able to upgrade to, say, a G1000 or have a Garmin 430/530 driving that six pack, but in most cases you’re now exceeding $10,000 and it’ll still bear little resemblance to your panel.

In fact, nothing you buy premade and certified will come very close to your actual panel configuration. That gets especially true if you’ve added a lot of stuff to your panel. So, now we come around to asking what you want to do.

With that discussion behind us, it’s time (past time, really) to figure out what you want to accomplish. As I suggested up front, you fly a Mooney or a Bonanza. Say you’ve upgraded to GTN radios and perhaps even an EFIS like the Garmin G500 or an Aspen suite. Would flying a sim with just basic radios and a six pack be adequate? Most of my mistakes are in the avionics and instruments—on the panel. Thus, for me, true proficiency through a sim is more likely if the sim matches my panel pretty accurately. And, matching your simulator’s panel to that in your airplane is highly unlikely in a commercial sim, but usually quite possible if you build your own.

So, you’re now down to deciding if logging the time is an acceptable tradeoff for not being able to fly your panel. Some of us will choose logging the time over most any other consideration. And, to be fair, the simpler your aircraft and its systems, or the closer it is to what came out of the factory, the more likely a certified sim will, indeed, work well for you, even if you fly a G1000 bird.

But if your current panel only retained perhaps the tach and manifold pressure gauges from the factory, and if you want to replicate that updated panel reasonably closely in a sim, you’ll have to build your own.

Don’t think you can buy a yoke, rudder pedals, a power quadrant and some software and add it to your home desktop computer. Chances are very high that your existing computer is not up to the task; it takes a rather high-powered computer with some specialized graphics capabilities for a sim. You’re better off getting purpose-built components.

You’re not likely to build a credible home sim for much under $4000. And, as you consider that, also consider what kind of quality you want. You can spend less than $200 for a yoke, or over $1000, with the difference typically being the quality of the action, the feel, and the accuracy.

Do you want physical buttons, knobs, and switches, or are on-screen depictions operated by touch sufficient? (Note that if you want that physicality, you’re less likely to be able to duplicate your panel.) Of course, along the way, figure out what instruments and avionics you want. Most are available for home simulation, but your needs here might dictate other choices.

I’ll stop here. Actually walking you through building your own sim is beyond the scope of at least this article. My purpose here was to get you to take a hard look at your proficiency and how a simulator might play a role, while getting you to think about the certified vs. do-it-yourself tradeoffs.

Frank Bowlin, as you likely know, is a strong proponent of simulation. He’s recently faced many of these choices and has learned a lot along the way, which he’s hoping to share.