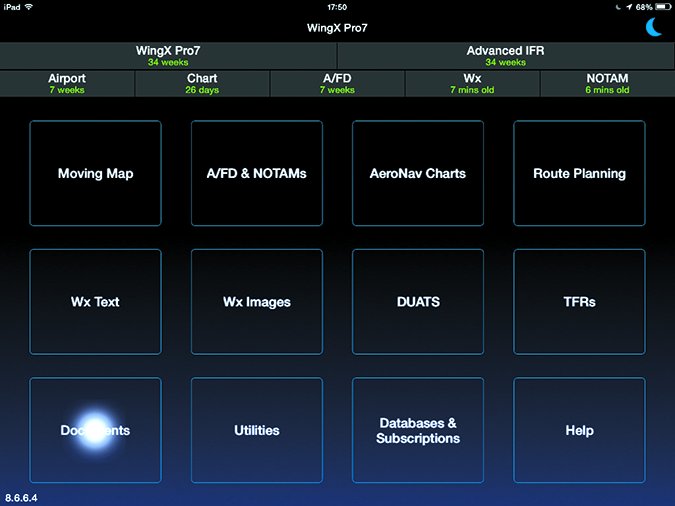 You use a tablet in the airplane, right? You’ve probably got one of the popular apps like ForeFlight, Garmin Pilot, or WingX. You probably use it for charts and nav, but if you don’t use your tablet as a full electronic flight bag (EFB), you might be missing the boat.

Back in 2007, the FAA issued AC 91-78, Use of Class 1 or Class 2 Electronic Flight Bag (EFB). Not only did the AC define an EFB, it also created regulatory distinctions and discrete rules governing Class 1 portable and Class 2 mounted EFBs. The AC gives Part 91 pilots guidance on how to safely transition from paper aeronautical charts and other cockpit documentation and replace it with an Electronic Flight Bag.

The good news is that all classes of EFBs may be used during preflight, VFR/IFR flight and post flight operations conducted under Part 91. More good news is that the AC is well thought-out and typical of the FAA’s conservative bent. Here are the highlights, a few cautions, and some ideas about how to make your EFB even more useful.

The AC defines an EFB as an electronic display system intended mainly for cabin or cockpit use. To that end, an EFB can display aviation data such as charts and make basic calculations such as time, fuel and distance calculations. An EFB can also include other databases, perhaps FARs, or additional applications such as crosswind, weight-and-balance and holding calculators.

Class 1 EFBs are portable; Class 2 EFBs are attached via a mounting device. Class 3s are built in to the aircraft, and get no further mention in the AC.

We tend to think of EFBs as multi-purposed devices, but the AC allows for separation of functions by distinctly defining an Electronic Chart Display (ECD) that shows interactive and/or precomposed information as the functional equivalent of a paper chart. The FAA draws a sharp distinction between an ECD and a multifunction display, because an MFD is permanently installed and designed under a Technical Standard Order, and displays more than just charts.

Note the FAA’s distinction between precomposed and interactive information. Precomposed information is fixed, such as airport diagrams and scanned or static images of paper charts. Interactive functions include a map that is dynamically generated from underlying data based on user-selected parameters, zoom level, etc; these functions are tagged by the AC as “on the fly” computations.

The EFB must not replace any system or equipment required by Part 91. Taking an extreme example, don’t expect your spiffy EFB instrumentation page with round dials to substitute for an unhappy attitude indicator. If this becomes necessary in flight, you should clearly confess the loss of the required capability and consider declaring an emergency.

As you might expect, the pilot must ensure that the EFB does not interfere with equipment or systems required for flight in accordance with 91.21.

The AC is explicit that EFBs and ECDs can be used to replace paper in all phases of flight, with two caveats. The first is that EFBs and ECDs must be the functional equivalent of the paper reference material. The second is that the information being used for navigation or performance planning is “current, up-to-date and valid.” (You’re left to your own to determine what the difference between current and up-to-date is.)

Recently an FAA Inspector went out on our ramp and insisted that several pilots show her their EFBs. Embarrassingly, one EFB showed 23 items out of date. Now these items could have all been for IFR operations and the flight could have been VFR, but fine shades like this do not impress an inspector. She issued no violations but her point was clear: Before using your EFB, be sure everything is up to date.

More happily, supporting references like legends, glossaries, and abbreviations must be available to the pilot, but are not required in the cockpit during operation. The use of an EFB/ECD to depict images is the decision of the operator and the pilot-in-command. Any precomposed paper-replacement or dynamic, interactive EFB application can be used without formal approval as long as AC 120-76, Guidelines for the Certification, Airworthiness and Operational use of EFBs is followed. Compliance with this AC is largely the responsibility of the software vendor.

Backup information is suggested but not mandatory. If carried, it can be either paper or electronic. For instance, if your EFB is also loaded in your smartphone as well as your tablet, you’re all set…just be sure to keep it current, too.

A Class 1 EFB must not depend on power supplied by the aircraft or input from aircraft navigation equipment in order to work. However, it may charge from aircraft power through a certificated power source, such as a cigar lighter socket. Many cigar lighter plugs contain an internal fuse to protect against a short circuit. In some aircraft, there is a power switch for the cigar lighter which must be off for takeoff and landing. See your POH/AFM for details.

As a portable device, it must not be attached to an aircraft mounting device, nor may it connect with or receive data from any aircraft system.

You might ask how this last restriction plays with Garmin’s Connext, Aspen’s Connected Panel and other certified ways to get panel-mount devices to exchange data with portables. The answer is in the question—these devices carry their own certifications that permit the data exchange.

A Class 2 EFB may receive power from the aircraft through an electrical bus source that is protected against short circuits with an appropriate circuit breaker or fuse. This would be the case if you have an avionics shop provide a power connector wired from the avionics bus.

Class 2 EFBs are permitted to receive position reference information from an onboard navigation system as long as the input to the EFB cannot adversely affect the output from the navigation source.

Lastly, the mounting for the EFB must be approved for installation in the aircraft. For instance, if the installation will be in a type-certificated aircraft as most us fly, then the device must comply with 14 CFR 21.303. This regulation concerns itself with Parts Manufacturer Approvals, or PMAs. For us, it simply means that a mounting device must be approved by the FAA under this regulation.

AIM 1-1-17.b.1.(c)(3) informs us that “modification of the aircraft, such as installing a panel−mounted or yoke−mounted holder, is governed by 14 CFR Part 43. Consult with your mechanic to ensure compliance with the regulation, and a safe installation.” Yes, you should at least involve your mechanic—and make a logbook entry—if you’re attaching even a clamp-on mount for any auxiliary device.

Think about how easy or difficult it will be to use your EFB and something the FAA calls “the human-machine interface,” both by the pilot and the copilot, if applicable. Think about the effort required to use it, how well the EFB flows in your cockpit, and display and lighting issues, especially at night. Think about how to shut the thing off if it misbehaves. If wired into your electrical system, it should probably be on the avionics bus so that it, like your other avionics, will be protected from electrical power spikes when you start and shut down the engine(s). Think carefully through what you will do if it fails, or if you simply forget to bring it.

Consider the physical issues. How will you stow it on takeoff, landing, or during airwork. One of my students took us through zero-g during an overenthusiastic recovery from an unusual attitude, causing my unmounted iPad to float before me as if levitated by a supernatural force. Many of you have learned the hard way that using your EFB in flight can be much more challenging than on terra firma. Think that through.

Train yourself on what kind of preflight checks the EFB should undergo, especially whether you have loaded it properly and invoked such options as will make it easier to use while airborne. Especially for IFR, you will want to know every operational function of the EFB, and be able to use the app(s) with certainty, with no fumbling or guessing. Consider the conditions including the phases of flight during which the EFB should not be used, such as programming it during taxi. How can you verify that your data entries are correct and computed values are accurate? Remember the old computer canon: Garbage in=garbage out.

Transitioning to your paperless cockpit, plan for an evaluation period during which you have paper backups handy. Make sure you meet the terms of the AC with respect to the EFB being as reliable and available as the paper you soon hope to replace.

As operator of the aircraft, 91.21(b)(5) permits the use of portable electronic devices that the operator concludes will not interfere with safe operation of the aircraft under IFR. The just-released AC 91.21-1c, Use of Portable Electronic Devices Aboard Aircraft, offers additional guidance.

Beyond the above, there is no limit on what you can add into your EFB. You can run Garmin Pilot, WingX, ForeFlight or any other flight app, giving you instant access to maps, charts and more. You can add your aircraft’s POH/AFM including supplements or—several if you fly more than one aircraft. This could include weight and balance information or maybe an app that does W&B for you instantly. On a ramp check, you could be legally asked to do so.

Speaking of ramp checks, you might include a list of dos-and don’ts that you can refer to in case you are ramped. Such checks are less common now because FAA inspectors are reportedly very busy. Google “FAA Ramp Inspection Job Aid” to get the entire FAA document that guides inspectors in conducting ramp checks, but start with George Shanks’ excellent article, “Dreaded Ramp Check” in the July issue.

Since most online documents are in PDF, you will need a way to read them. Many of our popular pilot apps already provide for user-added documents to the internal library, but you could also use a separate PDF reader. You should look at how you can best organize the documents. If you can’t easily find what you want without fumbling on the ground, it will be that much more difficult airborne. One significant advantage of electronic documents is the ability to search the document for what you need.

Of course, all this requires the ability to get the document in PDF initially. Most manufacturers allow you to download their documents in PDF, but what about things like the POH for your 1974 Cessna 172? You can also scan any document you like into PDF, but you should scan paper documents using character recognition so you’ve got the underlying text available for searching.

Documents must be physically stored in your EFB. If you pull them down from a cloud server they will not be in you EFB unless you take the step to store them there. This is also true for apps like Garmin Pilot and ForeFlight. One EFB, Cessna’s iFlite, is an integrated package of flight software plus static documents like POHs and Chart Supplements (formerly the Airways/Facility Directory, A/FD).

You must keep some paper and plastic. Your license, medical, ID, the airplane’s registration and airworthiness certificates must all remain in paper form. But AC 91-78 states clearly that everything needed for flight operations can be stored in an EFB. Just be sure to bring your charger.

Fred Simonds is grateful for his EFB now that he doesn’t have to carry all that heavy paper and wastefully throw it all away when it’s outdated. See his web page at www.fredonflying.com