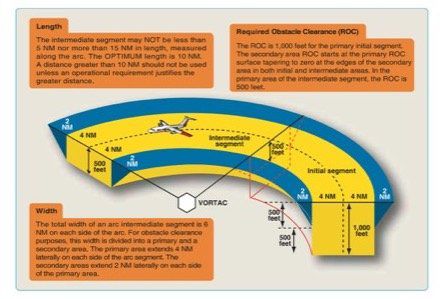 Most IPC tasks are routine. But, flying DME arcs is not and it’s no surprise that IPC applicants have more difficulty with them than any other. Perhaps this is why seldom-used skills like DME arcs remain on the books.

The Airman Certification Standards (ACS) does not require that a DME-arc approach be flown: “While the applicant is expected to be able to fly DME arcs, they may be selected for testing only if they are charted and available.” Since the nearest arc approach where I fly is some 50 miles away, flying an arc not on an approach will suffice. On approach or not, the skill is the same.

Few airplanes have DME, but your IFR GPS navigator can substitute. There must be a GPS waypoint in the database at the DME facility used for the arc.

A DME arc is a curved track at a constant distance around a facility that offers omnidirectional course information and DME, such as a VORTAC, VOR/DME or NDB/DME. This eliminates ILS or LOC DMEs. An arc’s radius is 7- 30 NM and is 5-15 NM long, with 10 NM preferred. Thus, arcs can be lengthy and inefficient. The primary area required obstacle clearance is 1000 feet within four NM of the arc along the initial segment, with a 500-foot secondary clearance extending another two NM. In the intermediate segment, the clearance drops to 500 feet.

The facility may be on- or off-airport. An arc is usually an initial approach segment charted as a heavy black line, making it part of the approach. And it usually leads to the final approach course but could be used in other ways. Rarely, a DME arc will be used in a STAR, but the FAA generally avoids these since not everyone has DME (or GPS).

To join an arc, fly a radial that intersects it like the OKT R-325 (next page)either outbound or inbound. Lead the turn to the arc; a half-mile lead is sufficient for groundspeeds up to 150 knots. Roll out after 90 degrees on a heading of 055 degrees and monitor the DME. If it’s more than 10 NM, adjust your turn toward the inside of the arc. If less, adjust your turn toward the outside of the arc.

Often an IAF that lies on an airway is placed at the end of an arc, easing the transition to terminal airspace. To see this you must consult the en-route chart. For the KAST ILS RWY 26, PULYI lies on V27 to the north and ZIGPI on V27 to the south.

Sometimes a Computer Navigation Fix (CNF) will denote beginning and ending arc points. The ILS 26 has a CNF X on the localizer identified as (CFLCD) in the holding pattern. These are for use by the GPS navigator only, not in filing a flight plan nor for any ATC application such as holding or for communicating with ATC. ATC can vector you to join an intermediate point along the arc, but if you’re navigating on your own, you’ve got to join the arc from an IAF.

It’s best to fly slightly inside the arc because it’s always turning toward you. Outside the arc, it’s turning away and a moment’s inattention can result in drifting further from the arc. The ACS standard gives you one nautical mile, which is, well, generous. Do not expect approach clearance until stabilized on the arc.

Wind correction will vary as you turn. The simplest way to gauge your performance on the arc is to inspect the DME. You should strive to keep the DME a constant on the arc, letting your actual distance tell you when to turn toward the station to decrease the distance or turn away (or continue drifting away) to increase the distance. You will quickly gain a sense of wind direction.

Some pilots prefer to keep a VOR’s CDI needle centered on the arc. The aircraft’s heading will be 90 or 270-degrees from the centered CDI, adjusted for the wind. Fly that to stay on the arc. When the CDI moves two to four degrees off-center, recenter it and use the new heading. This seems like extra work, but it can help keep your head in the game. If an uncentered needle makes you antsy, just keep the DME where it should be or use an RMI, if available. The old turn-ten twist-ten is now turn-two, twist-two (or four if you prefer).

Life is easier if you have an RMI as most GPS navigators do. Fly the arc by keeping the needle on a relative bearing of 90 or 270 degrees with a wind correction. On a constant heading, if the needle moves aft, you are flying away from the station. If forward you’re flying toward it. This is a great way to find out whether the crosswind is from the left or right. You can allow 5-10 degrees of needle movement, then correct the heading. The Instrument Flying Handbook recommends a 10 to 20-degree bearing change for each half-mile away from the arc.

Say you’re flying northbound on V27. ATC issues “Expect the ILS 26 at Astoria. Cross ZIGPI at and maintain 5000; arc east on the AST 19 DME arc.” Sounds reasonable, but we need an executable plan. First, reduce speed to avoid overshooting ZIGPI. Plan your right turn at 19.5 DME. But to what heading? ATC said “east” but we need a number.

That number is right in front of you if you know where to look. On V27 flying the AST R-166 radial northbound, your heading is 346 degrees. Look at the 90-degree mark on your heading indicator. It reads 076 degrees. That will be your initial heading to join the arc. Half a mile south of ZIGPI, turn right to 076.

Sometime after Approach sees you’re established, they’ll issue an approach clearance. Then you can descend to any published altitude without further clearance. Descend to 4400 then down to 4000 when established on final. The lightning bolt at JUNSA signifies the FAF for the ILS. No localizer approach is available which is why there is no Maltese cross.

You can fly the arc with a FROM or TO indication. Here, FROM makes more sense as it shows the lead radial directly.

The turn to join the localizer can be flown with one or two navs. With one, fly the arc until just before the lead radial. Then tune the localizer and turn to intercept. Set the 275-degree inbound course in the OBS for reference since the OBS is disabled in localizer mode.

Assuming two navs, consider flying the arc on the #2 nav and set the localizer in the #1 nav since it is usually the one with the glideslope. Importantly, it also tells you where you are relative to the localizer. Crossing LR-083, begin a half standard rate turn until the localizer needle starts moving. It’s four times more sensitive than a VOR radial, meaning things will happen quickly. Lacking a lead radial, lead the turn by about 10 degrees, also starting at half-standard rate. Properly performed, you will be rewarded with a nearly-centered localizer needle as you roll out on final.

Were this a VOR approach with but one nav, flying the arc using TO counts down radials (or up if flying clockwise) to the inbound course, giving you a clear, continuous picture of where you are. Use the back of the OBS to recognize reaching the lead radial. With dual navs, simply set the #1 to 257 TO. You’ll appreciate that setting in case you miss the approach which calls for flying to the AST VOR. Nav 2 becomes a backup for the final approach segment.

Somewhere before reaching ZIGPI, you should load the approach. You might be offered a DME fix of D166S, not ZIGPI. (More on this shortly.) Garmin navigators will display “NEXT DTK 076” and then prompt “TURN RIGHT TO 076” in the Navigation Status Bar when it’s time to join the arc. Fly the arc. Most properly configured autopilots will fly the arc using GPS navigation, but you should fly an arc approach in VMC to see exactly how your autopilot behaves.

Should ATC vector you to an intermediate point along the arc, activate the arc leg of your flight plan before reaching the arc. Approaching the turn to final you’ll get the alert, “NEXT DTK 257” and then “TURN LEFT to 257.” Sometimes a controller will let you fly an unpublished arc if weather lies along the charted arc. Or, you could just ask for vectors.

In some navigators, ZIGPI and PULYI are shown as DME fixes: D166S and D328S respectively and the lead radials as D083S and D070S. The D signifies a DME fix, followed by the radial of the fix. S is the 19th letter in the alphabet, indicating 19 NM from the DME facility. Some arc approaches use fixes and intersections together.

Passing the FAF, you must use localizer lateral guidance. AIM 1-2-3.c. permits you to use GPS navigation on the final approach segment on a VOR, VOR/DME, or NDB approach, but not with any approach using a localizer, including a back course, an LDA or SDF. The VOR or ADF must be monitored, meaning you cannot fly the approach if the named navigation source is out of service.

Care is needed in older navigators such as the Bendix-King KLN-94. If used on a DME arc approach, it will show you distance to the next fix rather than the arc distance. Helpfully, it will show left/right deviation on the CDI right up to the turn inbound. Garmin navigators show the desired track to join, maintain and exit the arc. Joining an arc many not be 90 degrees since the navigators account for groundspeed.

Flying a DME arc has three phases: joining, flying and exiting the arc. Tie them all together and you are ready to nail your next IPC.

Fred Simonds, CFII admires the graceful elegance of DME arcs. If you too can’t get enough, look up the VOR/DME RWY 15 at KMTN.