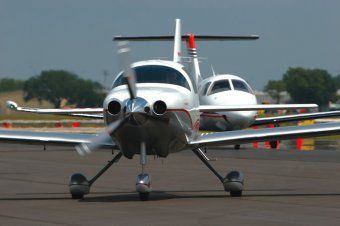 Good judgment and quick thinking are hallmarks of the aviation mentality. Both pilots and air traffic controllers are in the decision-making business. For controllers, every moment our headsets are plugged in, we’re making choices that affect the safety and flow of traffic in our airspace.

Some choices are easier than others, such as not clearing anyone for takeoff when I’ve got a Gulfstream IV on short final.

On a recent sunny day, I was putting that phrase to work. An IFR Cessna 182 Skylane was just pulling up to the hold short line of Runway 27. Its pilot checked in, cheer in his voice. “Tower, run up complete. We’re all ready to go.”

I noted his enthusiasm, but unfortunately, he was just one of three aircraft I was eyeing. Rumbling up to the hold short line on the opposite side of the runway, I had an IFR Airbus A320 airliner, followed by an IFR Embraer Phenom 100 light corporate jet. Shortly after the Skylane called me, the Airbus and the Phenom each reported ready in sequence.

Controllers spend their time assessing different factors about the aircraft under their supervision, and then acting on that information. Naturally one of those bits of information is which aircraft was ready to depart first—in this case, the Skylane—but that’s only one of many variables in our calculations.

Perhaps you’ve been to a theme park, like Disney World or Universal Studios, and waited hours in long lines for a thrill ride. Once you arrived at the head of the line, the smiling attendant likely asked you how many people were in your party. If you replied, “Four,” and they only have three seats remaining, she’ll keep on going up the line until she finds a party of three. Disney’s not going to send the ride off with three empty seats, just because those folks happened to be after you. That’s inefficient, since those three people would then take up space on the next ride and bump somebody else back.

In a way, that’s how ATC operates, analyzing each specific aircraft’s requests, routes, and restrictions in order to improve order and efficiency for the system as a whole. To provide the best overall service, sometimes individual aircraft have to wait a little longer so another aircraft with different requirements can go.

For instance, do any of the aircraft in line have a call for release (CFR) time or an expect departure clearance time (EDCT)? Aircraft going to major airports like Atlanta Hartsfield or to the Washington D.C. or New York City areas are often saddled with hard departure windows that range anywhere from 2-10 minutes. These windows are assigned by a Traffic Management Unit (TMU) so that the departure fits in with the ongoing stream of traffic headed to those airports.

If a CFR or EDCT aircraft misses its window, it has to wait for the next one. I’ve seen aircraft get delayed 30 or 40 minutes because they were 60 seconds late taxiing to the runway. These windows are serious business. For an airliner with hundreds of passengers in the back, that’s a lot of potential missed connections—and angry passengers.

Tower controllers don’t have room to budge here. If we’re inside a CFR/EDCT aircraft’s window or the window is approaching quickly, that aircraft takes priority. The entire tower crew works to make sure we hit the mark. Ground controllers will sometimes need to hold other aircraft on the ramp to get the time-sensitive flight to the head of the line. If there is a steady stream of arrivals and only room for one departure, it’s going to be the CFR/EDCT flight if the tower controller has a choice.

The A320 opposite my Skylane has a three minute CFR window to New York’s John F. Kennedy airport, with only two minutes remaining. If I let the Skylane go first, he’ll take a minute and a half to get airborne and out of the way. That’s cutting it too close. I decide the A320 is number one and clear him for takeoff. The Cessna driver will need to wait a little longer.

Staying Ahead of the Traffic

As the A320 rolls, I’m examining the route for the Embraer Phenom 100 light jet that’s taken its place at the hold short line. Both the Phenom and the Skylane are headed in the same direction: northeast. That’s a potential conflict thanks to another—and far more common—immutable factor: basic aircraft performance.

The vast majority of controllers aren’t pilots. Many have never even taken a seat inside a cockpit. However, from the beginning of our training, we’re taught to identify aircraft and recognize how their individual performance affects our overall sequence.

We don’t need to know specifics. I’m a private pilot raised in an airline family. I’ve been around airplanes my entire life. Even with that background, I couldn’t tell you the V speeds for the Phenom 100 bizjet or the Cessna 182’s best climb speed. However, any controller knows with confidence that the Embraer jet is sure as heck going to out-climb and out-run the Skylane.

To contend with performance differences, tower controllers will typically assign different headings to aircraft on departure. These headings must differ by at least 15 degrees to create legal IFR separation. Off Runway 27, if the Phenom was southbound and the Skylane northbound, I could clear the prop for takeoff heading 290 and the jet heading 250. That gives me more than enough separation.

That’s not the case here, since they’re both routed northeast. Picture what would happen if I launched the Skylane first on a 290 heading. As the Cessna turns, I could immediately launch the Embraer on a heading 270, and I’ve got my initial departure separation. However, the radar controller then has to keep them separate in their climb. With the slowly ascending Skylane in the way, he can’t turn the Embraer right until the jet’s at least three miles past or a thousand feet above the Cessna, taking the fast mover well out of his way before he can turn on course.

I make the call and clear the Phenom for takeoff on a heading of 290, knowing that as soon as he’s airborne, I’ll be able to clear the Skylane on a heading of 270. They’ll never be a factor for each other, and they’ll be perfectly set up for their ascent: fast jet in front, slower prop in trail.

As the Embraer takes the runway, I advise the Skylane he’ll be next. “Alright. We’ll be here, tower,” the Skylane says. The enthusiasm in his voice is notably fading. I feel for the guy, but I stand confident that this is the best decision overall.

The Phenom’s mains lift off the ground and I reach for my mic switch. Before I can clear the Skylane for takeoff, my ground controller cuts me off with a new flight progress strip. It’s for an IFR Beechcraft Bonanza, who’s requesting to depart our inactive Runway 36. That runway cuts right across the middle of 27. “Tower,” a new voice says on the radio, “Bonanza ready at three-six. I can take an immediate.” He’s hustling up to the 36 hold short line, obviously in a hurry. His route of flight? Northeast, just like our Cessna.

Let’s examine the situation. I’ve already departed two jets ahead of the Skylane, who’s been ready to go the entire time. Each jet took about a minute and a half to depart, so the Cessna’s taken a three-minute hit for the benefit of the overall traffic flow. Not a huge delay, but he’s putting his valuable time and money on the Hobbs meter just like everyone else.

How long’s the Bonanza been waiting? All of two seconds. He’s also requesting something special—Runway 36, which isn’t currently in use—instead of fitting in with the standard flow of traffic.

The complication lies in the northeasterly routing of both aircraft. If I depart the Skylane first, radar’s going to hook the Cessna right across Runway 36’s departure path. The Bonanza will probably have to wait three to five minutes for the Skylane to be clear of his flight path, depending on how fast the Cessna turns and climbs.

On the flip side, if I make the Bonanza number one, the Skylane will have to wait until the Bonanza cuts across the Runway 27/36 intersection. That’ll be about another minute, added on to the three he’s already waited. I can then launch the Skylane. Both will depart on vastly different headings and will be well-spaced for their northeast climbs, the Bonanza in the lead, Skylane in trail.

At this point, you probably think I’m going to tell you my decision. Nope. You’ve got all the information about both aircraft in front of you. You’ve got their aircraft types, their direction of flight, their potential conflict point, how long each has been waiting, how long their estimated total delay time will be, and their runway request.

Now, you make the choice. Who’s number one?

What’s for lunch? A healthy salad or a half-pound burger? That’s just one of the life-and-death decisions Tarrance Kramer has to make as a tower controller in the southeastern U.S.