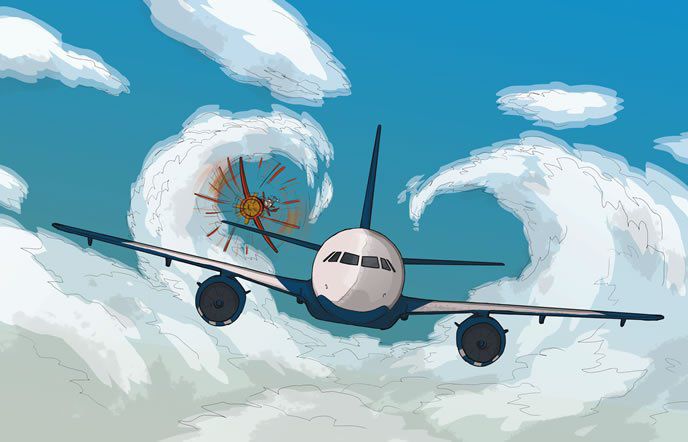 Let me say at the outset that general aviation pilots do not have to worry about wake turbulence because wake turbulence will only be dangerous on takeoff, departure, climb-out, enroute, descent, approach and landing.

Oh, uh…wait—that pretty much covers the entire flight, doesn’t it? Maybe we should worry about wake turbulence.

Now that I have your attention, we can get serious about this serious subject. In November 2001, An American Airlines A300 Airbus departing Kennedy International Airport encountered the wake from a Japan Airlines Boeing 747. In the attempt to control their aircraft, the Airbus crew’s rudder inputs overstressed the vertical stabilizer and it departed the aircraft. The Airbus crashed, killing all aboard and five people on the ground.

The cause of wake turbulence is well known—the lift produced by the aircraft wing and the induced drag. When questioned as to the origin of induced drag, many pilots cite the textbook answer, “It is the product of lift.” Yeah, true, but not very enlightening.

So, how does producing lift cause drag? Basic aerodynamics, tells us the shape of the airfoil causes an increase in the speed of the air moving across the top of the wing, in turn reducing the pressure of that air. Thank you, Mr. Bernoulli.

As an aircraft slows while maintaining altitude, the wings have to produce the same amount of lift at that lower speed. To create that lift at the lower speed, the wing will have to work harder by increasing angle of attack. This causes an increase in that pressure differential between the top and bottom of the wing.

Stay with me now, because this is the important part. Now we know what causes the induced drag, and that the induced drag causes the wing tip vortex, and that the strength of the vortex increases as the aircraft slows. Thus, the strongest vortices are produced by a heavy, slow aircraft. And, contrary to what you may have thought, a clean wing produces greater vortices at a given speed than with flaps deployed.

Why a clean wing? With flaps deployed, the air flowing off of the wing is more turbulent, causing the wingtip vortices (wake turbulence) to dissipate faster. Of course, with the flaps deployed the aircraft can fly slower yet, further increasing the strength of the vortices.

This is nice to know if you are on an approach following a large aircraft that is slowing on the approach. As the aircraft slows, the strength of the vortex increases and the danger to you in your aircraft increases. The danger is greatest if the airplane slows to near Vs before deploying flaps and then again as it approaches Vso for landing.

These vortices (one from each wing) sink to about 1000 feet below the aircraft and trail behind for several miles. The distance they trail behind depends on several factors, including the weight of the aircraft (lift has to equal weight in level flight) and the stability of the air.

If the air is stable (nice, smooth ride) the vortices will persist for up to eight to 10 miles for a very large aircraft such as the gimungous Airbus A380. If the air is unstable (bumpy ride), the vortices tend to break up and dissipate more rapidly.

The generation of the vortices begins at liftoff (when the wing starts to produce lift), and ends when the aircraft touches down (when the wings stop producing lift). When an aircraft is taking off or landing, if there is no surface wind, the vortices will sink to the ground and begin to spread apart about three to five knots.

However if there is a crosswind of three to five miles per hour, one of the vortices will continue in the direction of the wind, but the upwind one will tend to remain in place or drift over the runway and just sit there and spin. So the most adverse wake turbulence conditions are stable, smooth air, with a light crosswind.

But Maybe Not There

Airline jocks are pros, right, always on glideslope even in VMC? Uh, no. Being visual, they’ll commonly keep their speed up, often even at ATC request. Thus, a visual descent profile is often steeper than when in IMC, just like it is for you.

So you, in your Belchfire 300 are following the air carrier and you give yourself a comfortable margin by flying a dot high on the glideslope. In IMC that might be OK. But in VMC, the air carrier is above glideslope too, which puts you below and behind and right in the middle of the wake-turbulence danger zone.

This is exactly what happened to a Cessna Citation that was following a UPS Boeing 757 at Billings, Montana. To make matters worse, the Citation pilot had increased airspeed to 250 knots and closed the distance behind the 757 to about 2.3 miles, at which point the Citation rolled inverted, pitched up and crashed, killing all aboard.

A similar fate befell a Westwind corporate jet at Santa Ana, California when it was behind an air-carrier 757. As with the Citation, the Westwind pilot had closed the distance to less than three miles. The aircraft pitched up, rolled and crashed killing all aboard.

These accidents didn’t have to happen. They happened because the pilots did not follow the wake turbulence distance guidelines and allowed their aircraft to enter the wake of the preceding aircraft that was significantly heavier.

So, how can you protect yourself? First, understand what causes wake turbulence. Then, recognize the conditions that cause the wake turbulence to persist—stable air with a light crosswind. Next, learn to visualize where that wake will be given the preceding aircraft’s weight difference, the conditions and your distance.

If you don’t like what you’re envisioning, increase distance behind the leading aircraft. Next, offset yourself from where you envision that wake to be. That’s generally above the preceding aircraft’s glidepath by at least a dot or two (on a precision approach) and upwind.

And don’t let anyone (even a controller) talk you into being in a hurry on the approach. Keep your distance and if you think you are getting too close, go around. There is no shame in going around and living—it’s far better than going down and dying.

Finally, wake upsets can be sudden and violent, typically causing you to roll. Handle it like you would any turbulence—ride with it and make smooth corrections to right the aircraft. Taking the shortest path to right-side-up sometimes means completing the aileron roll the heavy in front started for you.

The vortices that cause wake turbulence may be invisible, but they can kill you just as quickly as a thunderstorm that you can see. Protect yourself and your passengers. Maintain wake turbulence situational awareness, then keep your distance in all three dimensions.

George Shanks retired from a major international airline. He is an instructor at a corporate pilot training center where he teaches courses on wake turbulence and other airmanship subjects.