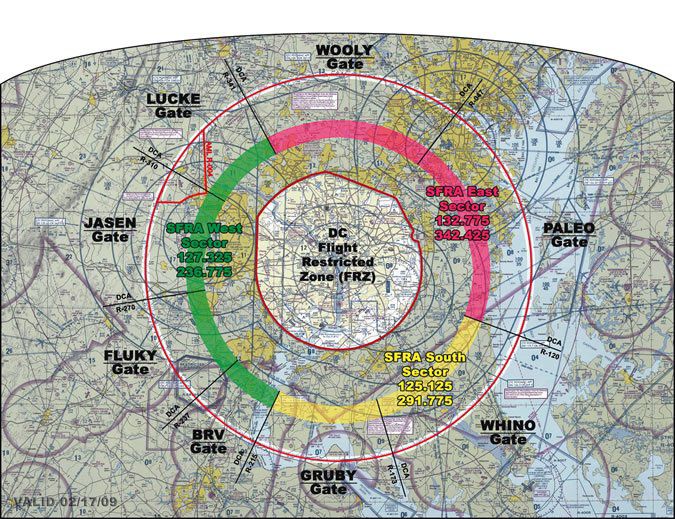 I vividly remember my first VFR flight into the Washington, D.C., Special Flight Rules Area (SFRA, previously the D.C. ADIZ). Arriving into Leesburg, Va., I ducked under the Dulles Class B airspace and entered the downwind behind another aircraft. That’s when I heard the voice: “Watch your altitude.”

I figured Potomac Approach somehow smelled fresh blood and would have a SWAT team greeting me on landing.

No one greeted me other than a lineman telling me where to park, but the whole experience still chilled me more than an approach to minimums with a load of ice (don’t ask how I know). However, once you understand the rules of the game, especially the seldom-discussed interplay between VFR and IFR operations within the SFRA, it’s no big deal. Here’s what I’ve learned the hard way, so hopefully you won’t have to.

You can simply stay IFR and cancel on the ground at airports within the D.C. SFRA. In this case, there’s nothing different from flying under IFR to any other destination. (You don’t even need to complete the SFRA training per FAR 91.161.) The downside is that oftentimes this is impractical because of delays. There are three Class B airports nearby and a host of other IFR and VFR traffic.

The most useful lesson I’ve learned is that you can safely cancel IFR inside or outside the SFRA with Potomac Approach and continue to your destination within the SFRA, and still be in compliance with the requirements for entry (but now the SFRA VFR training is required). Just make sure you’re talking to Potomac Approach when you cancel. Other facilities tend to know little about SFRA operations and you could risk a violation if Potomac isn’t in the loop.

Once you report your destination in sight or cancel IFR, keep your current squawk code. We squawk 1200 after cancelling or on arrival everywhere else in the country, but not inside the SFRA. Don’t touch the transponder. This mistake is the most common way to set off the wrong kind of alarms and the most common violation of the SFRA rules. The sad part is it happens to pilots trying to do the right thing.

Mixing VFR and IFR is great for getting in, but it’s no help getting out under IFR. Considering the density of the airspace and the inability to pick up clearances in the air (you need the clearance before you climb into the airspace), it’s common to receive an indefinite “hold for release” at uncontrolled fields. When you get an IFR release, it will have a super-short void time. Although it is possible to sweet talk the controller into switching your IFR plan over to a VFR SFRA flight plan to prevent the annoying wait, it’s been my experience that ATC doesn’t like doing it.

No matter what, do not simply take off and try to fix it in the air. That trick is not an option here and ATC will not be amused.

If you plan on saving some time by going VFR, you still must file a flight plan. This is really the biggest hassle in flying the SFRA. The special SFRA flight plan must be filed with Flight Service or DUATS. (Fltplan.com doesn’t support these). On DUATS, they are filed as IFR flight plans with a VFR altitude tag; “VFR/025” in the altitude block means an SFRA VFR flight plan at 2500 feet.

Considering that they’re filed as IFR flight plans, it’s no big surprise that SFRA clearances are handled similarly. Prior to departing VFR from an airport within the SFRA, you must call Potomac Clearance and obtain your departure frequency and transponder code. It can speed the process to pick up your SFRA or IFR clearance over the phone before engine start by calling one of the direct lines to Potomac Clearance.

Similar to an IFR clearance and release, once you have that clearance you can take off within the SFRA while—triple-check this—squawking the right transponder code. Then you call Potomac Departure on the specified frequency. Departure will respond with “Transponder observed.” ATC officially only provides “security services” to VFR aircraft within the SFRA, but oftentimes they will call traffic for you. When exiting the SFRA, ATC will usually notify you and tell you to squawk VFR. If they miss it, call them to double check (get it on the tape) before tuning 1200 and going on your merry way.

Entering the SFRA is the same, except you contact Approach on the frequency for your sector before entering, and get your squawk code from them.

To gain the convenience of not having to deal with IFR traffic delays in the D.C. area, pilots must give up the comfortable airspace-ignorance cocoon that comes with IFR. Most of the SFRA includes some of the most complex Class Bravo airspace in the country, and receiving a VFR Bravo transition is rare.

This mandates paying attention to the airspace both vertically and laterally, and staying vigilant for other planes competing for the same sliver of air. Although having GPS isn’t mandatory, the SFRA boundaries and multiple Class Bravo shelves are too complex and the stakes too high to not have some kind of GPS with you.

Don’t forget that the big chunk of airspace immediately surrounding D.C., known as the Flight Restricted Zone, is mostly a no-fly zone for GA aircraft. This effectively makes the SFRA donut-shaped. Aircraft are allowed into the three public airports inside the FRZ only with security clearance and background checks. Reagan (formerly National Airport) is closed to GA traffic not on an approved security program, which requires TSA screening of passengers prior to takeoff and an armed officer on board.

VFR aircraft within the SFRA are also limited to 180 knots, so watch those high-speed descents. Outside of the SFRA but within 60 miles of DCA VOR, VFR aircraft are limited to 230 knots. Because a lot of flying near the SFRA involves ducking under Class Bravo airspace, it’s worth noting the speed limit beneath Bravo airspace is 200 knots.

Not Bad, But No Joke

The stories about interceptions and certificate actions for honest mistakes are real. I haven’t been on the receiving end of a man in a dark suit asking, “Excuse me, are you the pilot of this aircraft?” but I have witnessed such actions firsthand. Ironically, it’s more often larger, corporate machines than smaller, single-engine birds.

That disembodied voice I heard going into Leesburg? It was actually a flight instructor on the ground calling his solo student ahead of me in the pattern. A bucketful of anxiety and incomplete understanding can play nasty tricks on you. The SFRA should not be feared, simply respected for what it is: More stuff to learn about.

Lee Smith, ATP/CFII is a freelance writer and corporate pilot in Northern Virginia.