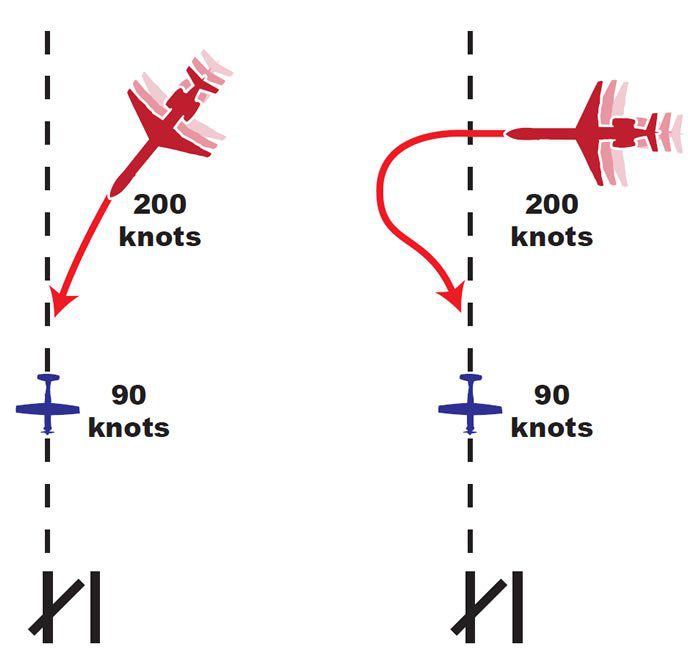 Air traffic controllers have quite a few options for saying one simple thing: “Turn your airplane.” Each vectoring method, like a hammer or a pair of pliers, is a specialized tool designed to fit a particular situation.

As you fly, you may hear a variety of vectoring radio phraseology on a daily basis. Like many real-world tools, they may appear simple and familiar on the surface. However, using them requires proper technique and foresight on the part of both controllers and pilots.

FAA Order 7110.65—the ATC handbook—lays out the vectoring toolbox in section 5-6-2. Let’s roll with the basics: “FLY HEADING (degrees).” The controller wants you to turn to the assigned heading, but which direction should you turn? The Pilot/Controller Glossary’s Fly Heading entry says, “The pilot is expected to turn in the shorter direction to the heading unless otherwise instructed by ATC.” If you’re heading 089, and ATC says “Fly heading 270”, you’ll make your turn to the left. If there’s ever any ambiguity—for instance, if you’re flying 090 degrees and ATC wants a 270-degree heading—verify the direction with the controller.

If ATC indeed needs the turn in a certain direction, they’ll employ the second tool: “TURN LEFT/RIGHT HEADING (degrees).” Let’s say you’re heading 089 degrees again and need a westbound turn, but off your left wing there’s an obstacle or traffic. “Turn right heading 270” ensures you make that turn in a safe direction. If the direction is truly critical or the turn direction is counterintuitive, controllers may add extra emphasis, such as, “Turn right—again, turn right—heading 270.”

“TURN (number of degrees) LEFT/RIGHT.” This is commonly used for tweaking existing vectors. Are you now on that 270-degree vector, but the winds aloft have you tracking 250 degrees across the ground? To compensate, ATC’s next instruction could be, “Turn 20 degrees right.”

“DEPART (fix) HEADING (degrees).” Cross the specified geographic fix, then fly the heading. Imagine your destination is landing Runway 36, and you’re approaching it from the northwest. There’s a VOR named ABC five miles due west of the airport. “Proceed direct ABC, depart ABC heading 180.” You cross ABC and turn south. That’ll set you up on a midfield left downwind for Runway 36, five miles west of the airport. Now all ATC needs to do is give you a base turn to join the final.

“FLY PRESENT HEADING.” Last and certainly the least complicated, it instructs you stay on your current heading. This will probably be coupled with other instructions. Perhaps you took off on a tower-assigned heading of 090 degrees. Due to traffic, ATC doesn’t want you to turn yet. “Fly present heading. Climb and maintain 5000.” Another example? How about picking up an airborne IFR clearance when you’re already more-or-less headed towards your first fix. “Cleared to [destination] as filed. Climb and maintain 7000. Fly present heading. When able, proceed on course [first fix].”

That’s the “how” of vectoring. What about the why? You filed a specific route because it suited your flight best. If ATC is pulling you off that route, there needs to be a reason. Paragraph 5-6-2 (b) of the handbook instructs controllers, “When initiating a vector, advise the pilot of the purpose.”

There can be any number of reasons for a vector, but 5-6-2 illustrates the major ones: “Determine optimum routing based on… wind, weather, traffic, pilot requests, noise abatement, adjacent sector requirement, and letters of agreement.” Note: nowhere in there does it say “for controller amusement.” ATC is in the business of getting you to point B as expediently as possible. If we’re adding on to your flight time, the reason must be legitimate.

Some common ones? “VECTOR FOR TRAFFIC” or “VECTOR FOR SPACING.” Those are self-explanatory. ATC is supposed to separate and sequence planes, and that’s what those vectors accomplish.

Speaking of traffic, depending on your aircraft’s speed and vertical performance, vectors may be required to get you in or out of congested terminal airspace. “VECTOR FOR CLIMB (OR DESCENT)” covers the twists and turns sometimes required to sequence a mix of different aircraft. A related side note: If you’re being vectored off a published procedure with altitude restrictions, like a SID, STAR, or even an instrument approach, ATC has to assign you an altitude to maintain.

How long will these vectors last? If ATC’s got at least a ballpark figure, they should follow 5-6-2 (d). “If appropriate, advise the pilot what to expect when the vector is completed.” This urges ATC to keep you in the loop. Examples? “Turn 20 degrees left, vector around active restricted airspace. Expect direct APT in two-zero miles.”

This also applies for weather-related vectors. A radar controller may vector you around precipitation that’s depicted on their radar scopes, but you’re the pilot-in-command with your eyes out the window. The ultimate power is yours. ATC knows that. If they’re vectoring you through a ten mile gap in a storm line, they’ll likely make the heading conditional. “Fly heading 290, vector for weather. When able, proceed on course.” In other words, when you’re comfortable with what you see outside or on your equipment, you can come off the vector and resume your own navigation.

The termination point of a vector is implied when ATC uses navigation vectors such as “VECTOR TO (fix or airway)” and “VECTOR TO INTERCEPT (name of NAVAID) (specified radial).” Upon reaching a certain fix, airway, or radial, you’ll likely be expected to resume your own navigation. “Fly heading 130, vector to V36. Join V36 southeast bound.” How about a VOR radial? “Fly heading 310, vector to intercept the ABC VOR 330 radial outbound.”

Of course, we’ve got to tackle the all-important “VECTOR TO (approach name) FINAL APPROACH COURSE.” Does a good landing start when you’re about to flare? Of course not. It begins with a stable approach, which in turn begins with a smooth turn on to final. Good vectors allow reasonable time to turn and get established on the final approach course.

Therefore, controllers don’t aim aircraft at the final approach fix itself. Instead, they base their vectoring on an imaginary reference target called the “approach gate,” typically located one mile outside the FAF. It doesn’t appear on any chart; a controller pictures it mentally for each approach. By vectoring a pilot to intercept final at this gate, it guarantees at least one flying mile to get established laterally on the final before the pilot begins descent at the FAF.

If the weather is below the 500/3 criteria, all aircraft need to intercept two or more miles outside the approach gate (i.e. three miles from the FAF). This increases the safety margins when the sky conditions are unfavorable. The latter, increased distance also applies to all aircraft on RNAV or GPS approaches, regardless of weather.

Why do RNAV approaches require the increased distance all the time? During transition from enroute flight to an active RNAV approach, the sensitivities of an aircraft GPS receiver’s autonomous integrity monitoring (RAIM) protocol and the panel CDI increase to meet the approach’s increased accuracy needs. RAIM verifies both that there are enough satellites visible, and the accuracy of navigation calculations. This process begins at two miles from the final approach waypoint (FAWP). Therefore, aircraft on RNAV approaches must be vectored to intercept final at least three miles from FAWP to allow proper time for the RAIM checks. It’s a safety thing.

There are plenty of “minimum” altitudes related to IFR flight—minimum reception altitude (MRA), minimum enroute altitude (MEA), minimum obstacle clearance altitude (MOCA), etc. Controllers may be aware of some of those for their airspace, but the one they’re most keenly familiar with is the MVA, or Minimum Vectoring Altitude. I mentioned it briefly before, but what is it exactly?

As defined in the Pilot/Controller Glossary, the MVA is “the lowest MSL altitude at which an IFR aircraft will be vectored by a radar controller, except as otherwise authorized for radar approaches, departures, and missed approaches. The altitude meets IFR obstacle clearance criteria.” Over flat terrain, the MVA is typically 1000 feet above the highest obstacle in the area. Double the height cushion to 2000 feet over mountainous terrain.

MVA charts are not openly available to pilots. However, MVA altitudes are fairly easy to deduce. For instance, if you’re overflying a Midwestern plain that’s barren save for a 2000-foot MSL antenna, expect the MVA around the antenna to be 3000. feet The FAF/FAWP altitudes for approaches in the area may also give you a clue, since controllers don’t generally vector for approaches below those altitudes.

While an MVA overall is a hard floor, there are certain circumstances where ATC can vector IFR aircraft below it. Ever had a tower controller tell you to fly a heading and then clear you for takeoff? How about shooting a practice ILS to a touch and go, then executing a non-published missed approach consisting of an ATC-assigned heading and altitude? Both are assigned vectors, and on the go you weren’t even off the ground yet, much less above the MVA. How does that work?

Obviously, a primary concern for departing pilots is obstacle clearance, especially in IMC. If the departure or missed approach aircraft’s flight path takes it at least three miles from an obstacle, ATC has to vector to maintain that minimum distance. What if the flight path is closer than 3 nm? That’s fine, but on departure, ATC has to turn the aircraft away from the obstacle. In both cases, once the aircraft climbs above the obstacle’s altitude, ATC is free to vector in all directions.

Over the past several years, the FAA has also been introducing Diverse Vector Areas. Based on in-depth studies of obstructions around an airport, they allow even greater departure vectoring flexibility below the MVA. I encourage you to read Lee Smith’s great article “Diverse Vector Areas” in the March 2015 issue of IFR, where he covers the subject in great detail.

Whether you’re getting a left turn, right turn, or told to “fly present heading,” vectors are serving the needs of safety and expediency. Sure, they’re simple tools, but they’re necessary and highly effective at keeping aircraft apart and in order.

When he’s working a busy final out in the MidWest, Tarrance Kramer doesn’t let a tool go unused.