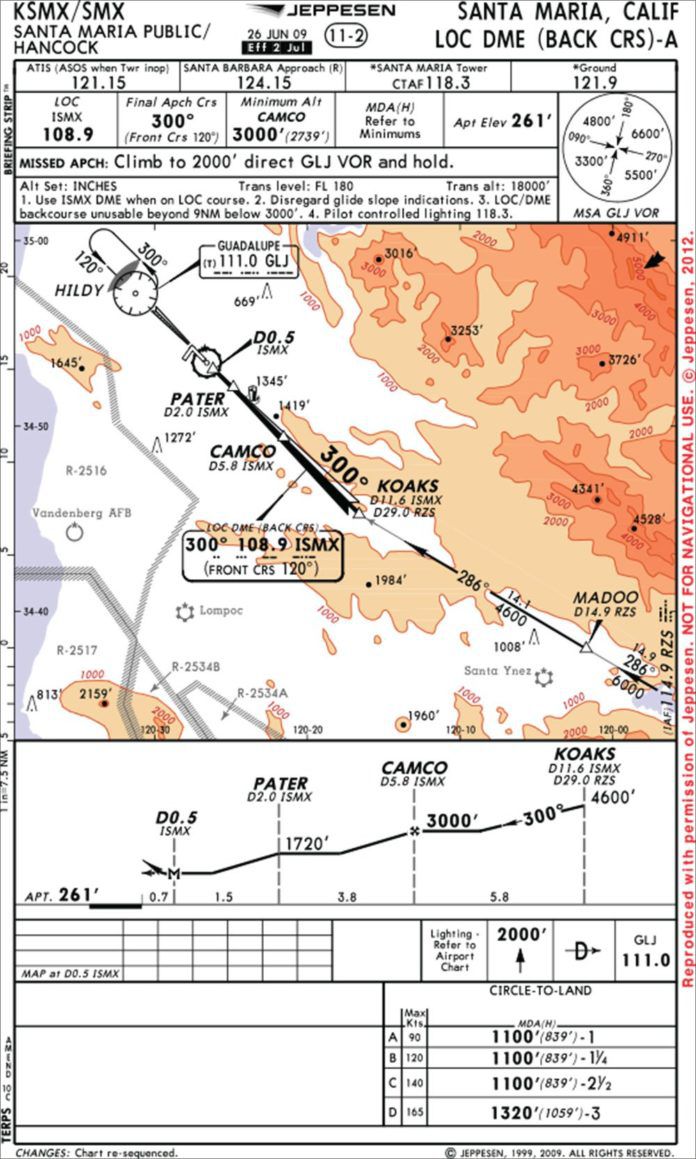 FAR 91.175 lays out exactly when you can descend below MDA and land—or does it? One pilot’s skip of a stepdown inside the FAF while VMC sparked a regs controversy.

The M.O. of IFR magazine is bringing to daylight all those little corners of instrument flying where the real-world practices differ from the regs, or at least where playing the game a bit differently than you learned in ground school has payoff without jeopardizing safety.

But every now and then we stumble on as situation where we know the real world, but the regs jump up and surprise us. What, you mean that’s not legal?

That’s what happened to a pilot we know whose post on a Cirrus Owners and Pilots Association (COPA) forum ignited a heated debate about whether he had broken a reg by doing something he and countless other pilots have done for years.

An IFR reader and COPA member tipped us off to the discussion and asked our two cents. Here we go.

The Setup
The approach in question is the LOC/DME BC-A in to Santa Maria, Calif. It was a clear night, but due to the terrain and the after-sunset arrival that would hide it, the pilot requested and received the approach. Cutting to the important bit: The pilot was established on the localizer backcourse past CAMCO with the VASI in sight. He reported CAMCO as requested and reported the runway in sight. Then, as he has done for years, he descended with a plan to land straight-in on Runway 30, which is aligned with the localizer.

As the pilot passed 1500 feet, the Tower—which had a BRITE display showing ATC radar—called and said he was below the minimum charted altitude of 1720 outside PATER. The pilot knew this: he was descending intentionally, knowing if he maintained 1720 until PATER, the required descent of 1459 feet in 2.2 miles would be too great to land straight-in on Runway 30.

The Tower reprimanded him that having the runway in sight didn’t matter, he couldn’t descend below 1720 before PATER. The pilot cancelled IFR, landed, followed up with the Tower and, eventually, the FSDO. He ended up filing a NASA ASRS form because all official channels agreed he violated FAR 91.175 (Takeoff and Landing under IFR), which contains the conditions on landing from an instrument approach.

But if he did violate that reg, he and countless other pilot have been busting it for years.

The Easy Answer
This discussion is partly academic. The exchange that usually happens in the real world is the pilot reports the airport in sight to ATC—usually an Approach controller, which matters here—and the controller replies, “Cleared visual approach,” often with the instruction at that point to contact the Tower.

That’s a change of clearance. The pilot is longer be on the published approach but on a visual and free to descend at pilot’s discretion. But that’s not what happened at Santa Maria, as the pilot was already talking to Tower. The pilot could have told the Tower, “Runway in sight, request visual approach.” That might have required the Tower talking to Approach to get an approval, but it would be the best way to go for maximum flexibility. The only trick would be doing it early enough to get approval in time for a reasonable descent. Note that a visual only requires VFR at the airport; the pilot doesn’t need VFR cloud clearance to request and fly it. The pilot could also request a contact approach if the airport was less than VFR. The pilot could also cancel IFR, as he did.

The pilot could also have asked for a visual to start but flown the localizer. There’s nothing that says you must make a beeline to the airport on a visual, although it’s good form to tell ATC you’ll follow the localizer inbound. Experience had shown the pilot that this was a bad plan, as Approach wouldn’t let him drop below 6000 feet without the airport in sight, which ends up creating the same descent problem.

Of note here is that a VASI only offers obstacle clearance four miles from the runway, so until the pilot was four miles out, following the VASI down did not guarantee obstacle clearance. The fact that the approach is aligned with Runway 30 but no straight-in mins are published is a tipoff to look for obstacles. You’ll find one smack between CAMCO and PATER. So long as a pilot kept all that in mind, any of these plans should allow a safe straight-in to 30.

Now, Technically Speaking …
That’s all well and good, but was the descent while still on a clearance for the LOC/DME BC legal?

Controllers we asked were nearly unanimous that it wasn’t. ATC bible 7110.65 makes it clear that “Clearances authorizing instrument approaches are issued on the basis that, if visual contact with the ground is made before the approach is completed, the entire approach procedure will be followed unless the pilot receives approval for a contact approach, is cleared for a visual approach, or cancels their IFR flight plan.”

That’s pretty cut and dried. But pilots don’t read 7110.65, and our guidance is less clear. FAR 91.175 says you can’t descend below MDA without the required visibility (not an issue in this case), one of the required visual references (also not an issue with the runway in sight), and unless you can land with normal maneuvers (not an issue if the pilot can descend for landing before PATER). 91.175 also says these apply, “… when it is necessary to use an instrument approach …” but the pilot requested the approach, so we think it applies.

However, AIM 5-4-7 (e) says, “Except when being radar vectored to the final approach course, when cleared for a specifically prescribed IAP; i.e., ‘cleared ILS runway one niner approach’ or when ‘cleared approach’ i.e., execution of any procedure prescribed for the airport, pilots shall execute the entire procedure commencing at an IAF or an associated feeder route as described on the IAP chart unless an appropriate new or revised ATC clearance is received, or the IFR flight plan is canceled.”

OK, but where does this procedure end? At first glance, it would seem that PATER must be included as it’s a stepdown before the pilot can descend to the MDA. What complicates matters is that PATER is inside the FAF at CAMCO. Stepdowns inside the FAF are usually optional, with lower minimums if you can identify them. That’s not the case here; there are no non-PATER minimums. Is crossing PATER at 1720 still required if you can see the runway?

Both we and the COPA members delved into FAR 1.1 (definitions) for clarity. FAR 1.1 defines an Instrument Approach Procedure (IAP) as “a series of predetermined maneuvers by reference to flight instruments with specified protection from obstacles and assurance of navigational signal reception capability. It begins from the initial approach fix, or where applicable, from the beginning of a defined arrival route to a point: (1) From which a landing can be completed; or (2) If a landing is not completed …”

This leads one to believe that when a landing can be completed, the approach is over. But by itself that would mean you could be halfway along a base leg for an instrument approach, see the runway and decide the approach over without telling ATC.

That’s clearly not how things are supposed to work and support exists in FAR 91.175, where it says says (emphasis ours), “(c) Operation below DA/ DH or MDA. Except as provided in paragraph (l) of this section, where a DA/DH or MDA is applicable, no pilot may …” So there’s a requirement that we’re talking about the final approach segment where MDA/DA applies to make that final descent.

FAR 1.1 adds to this with a definition of MDA: “… the lowest altitude specified in an instrument approach procedure, expressed in feet above mean sea level, to which descent is authorized on final approach or during circle-to-land maneuvering until the pilot sees the required visual references for the heliport or runway of intended landing.” There’s also the definition for final approach fix: “The beginning of the final approach segment and the point where final segment descent may begin.”

But here’s the hitch: Because there is no published MDA/DA from CAMCO to PATER, we think FAR 91.175 doesn’t apply until PATER any more than it would on an initial or intermediate segment. We hate to say it, but we think the FSDO and Tower are technically right.

The Takeaway
One objective of real-world flying, IFR or VFR, is maximizing utility while minimizing risk. The point of flying the LOC/DME BC-A in night VFR was for safety from terrain. The point of descending early was also for safety, as a circling maneuver in the dark adds its own risks of disorientation and terrain. So long as the four-mile VASI limitation is respected, we think making the straight-in from the published approach by descending before PATER is the safest way to go.

So we’d do what we had to to make that happen. The A-Plan would be calling the runway in sight and asking for the visual as soon as we could. That way we’d get the revised clearance early enough to get the descent we wanted.

We also wouldn’t hesitate to cancel IFR for that last segment if the new clearance didn’t come back fast enough. On a severe-clear night, we think, holding onto an IFR clearance that late in the approach holds little extra benefit. If the Tower wasn’t open, there is some benefit that there would be a search and rescue if you crashed and never called in to cancel on the ground. But that’s about it. If weather was marginal, we’d be less enthusiastic, as we could end up going IMC in the dark with little warning. Unlike a visual approach, there’s also a requirement for maintaining VFR cloud clearances if we cancel IFR.

If the Tower was closed and we were too low to talk to Approach or Center, we’d just descend as we saw fit. We can’t technically cancel or get a visual, but we can say we tried and thought we heard a scratchy reply of approval. No one can prove otherwise, nor would anyone be likely to try.

TERPS requirements can create these conundrums. The FAF at CAMCO had to be in controlled airspace, which limited where it could be put. The post-FAF stepdown is a common way to get a lower minimum when that happens. But if th elatter segment is the only minumum published, you’ll get this issue.

Not every approach is best flown entirely as published. It’s up to you to exercise the options that get you what you need when you need it.