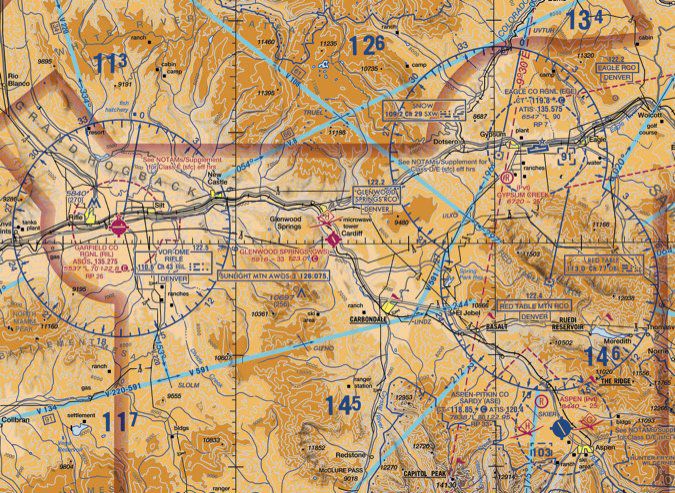 It had to happen one of these times. Today you’ll fly the approach that makes NetJets pilots wish they’d taken that cargo job over the Great Lakes: the infamous LOC/DME-E into Aspen, CO. It’s 3500 feet of localizer stepdowns to a MAP that’s still 2.6 miles from the runway. The missed is a climb on dedicated backcourse past “hills” so dramatic one Citation pilot friend puts it: “When we fly into Aspen, I don’t look out the window until we’re about to land. And even then, I don’t look up.” Many companies require special training to fly paying passengers into Aspen, Eagle, and similar mountain airports.

Before your date with destiny, however, you have a departure to do. Start on the ramp at Rifle Garfield County (KRIL) and crank the weather down to ceilings of overcast stratus at 9000 MSL throughout the virtual world. (Yeah, you won’t be landing at Aspen. We’ve got something special in store for you after the missed.)

Pick an aircraft that can climb well at altitude. If you’re doing this with real world temps this time of year, you might want something with deice. Taxi for Runway 8 at KRIL. (Insider reveal: When I went to type KRIL just now, I typed KRIP instead. Rest in Peace? This doesn’t bode well.)

You have a choice for departure depending on your sim capability. Either fly the UYRIG 4 RNAV departure, or the textual obstacle DP for Runway 8. UYRIG 4 users should fly the transition for Red Table (UYRIG.DBL). Non-RNAV fliers will climb over RIL VOR, then fly V220 SLOLM V134 DBL. Either route gets you to DBL. Assume your clearance was to 15,000 feet. You might need to turn off hypoxia effects in your sim unless you have virtual oxygen or a pressurized cabin.

This procedure isn’t authorized for arrival on R-244 to DBL, so let’s change that. ATC assigns you a hold: “… northeast on R-046 at 15,000, 1:30 legs.” Spin a turn or two in that hold before allowing yourself the virtual clearance for the approach from Red Table. But don’t be in too much of a hurry. Read the chart carefully. It happens fast, the required descent is anvil-esque, and the wind matters on every leg of the approach and missed. Give it your best and we’ll see you on the climb. Hopefully.

Fly the missed approach procedure out of Aspen only as far as LINDZ. From there, your new route is V591 SXW V8 RLG KEGE at 15,000. If you have GPS, give yourself direct VOAXA from V8. If not, cross RLG, descend and maintain 14,000. Either way, hold as published at VOAXA at 14,000. Spin twice around the hold, and then give yourself the clearance for the LDA DME Rwy 25 approach at KEGE. Be sure you decide which minimum you’re going to use before you start down. There’s no right answer, only tradeoffs. If you choose the LDA/GS and the sim has descent visuals, you’ll experience a real approach oddity: You can continue on a visual leg toward an airport you don’t have in sight.

If you don’t find the runway in time to land, fly the missed approach procedure and think again about how much extra fuel mountain IFR requires. In fact, if you miss, imagine yourself faced with the situation in the real world. Where would you go?

However, the weather you set at the beginning of this folly should allow for a successful approach if you play it right and don’t let the winds get the better of you. Find the airport and put it on the pavement. Watch out for that crosswind as you land…

…or for bonus points and sim fun, make it a touch-and-go. Then fly the valley visually to find KGWS and land there. At least it won’t be a crosswind.

Now that you’ve flown this (a few times, perhaps) how did it work out? Here are some post-mortem questions to see if you considered all the fine points, or possibly to give you even more to think about.

1. How much fuel did you have onboard for takeoff? Did you have any special issues managing your fuel in flight?

2. The UYRIG FOUR has a climb to intercept course. How far from the airport is that intercept?

3. If you flew the non-RNAV departure, you passed an “X” flag at SLOLM. What’s that for?

4. Did you notice Sunlight Mountain AWOS on the low chart? Why would an instrument pilot care about this?

5. Okay, perhaps making you fly the DBL transition to I-ASE was mean. It’s only 3.4 miles and you have a tailwind. If you were doing 200 knots over the ground, how far away from DBL would you want to start that turn?

6. How’d that descent to MDA at Aspen work out for ya?

7. How much tailwind was there on approach to Aspen? How much crosswind?

8. Can you use GPS for the localizer backcourse on the missed?

9. Which approach did you choose at Eagle? To what minimums?

10. The LDA/GS is only offset by three degrees and not crazy-steep. There are good lights and paint. Why isn’t it an ILS?

There you have it: tough climbs, precipitous descents, and charted scud-running in low visibility down an alpine valley—insanity in the real world, just another day at the office in the sim. Or for professional pilots working the hills of Colorado, wishing they worked somewhere safer.

10. Because an ILS must be to a runway. Follow that LDA/GS all the way to earth and it’ll be a taxiway about halfway down the airport.

Jeff Van West is a simulator and real-world instructor. He’s also the Creative Director for PilotWorkshops.