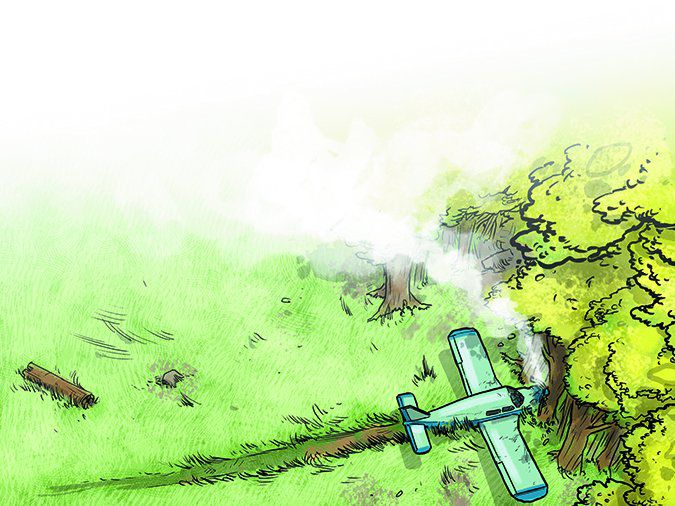 It’s that time of year when we who have successfully covered up our own boneheaded mistakes snicker over the antics of those less fortunate flyers who have failed and got caught. This review of NTSB accident reports from 2013 makes no pretense of learning from others’ mistakes. The following acts of aerial mayhem are a reminder that no matter how bad your own decision making might be, there’s always someone eager to lower the bar. We skip fatal accidents and usually give errant student pilots a pass, because their brains aren’t yet fully developed.

This Michigan student deserves a seat at the adult table in his Trick Trikes Storm Trooper, a weight-shift aircraft with a thoroughly stupid name. Seems the Tricky Triked Trooper “made two low-altitude passes (over) a congested, coastline beach area.” Impressed with his shifting pilot skills, he “entered into a steep, right bank turn at low altitude and impacted the beach.” Beach goers caught the show on video, making the Trooper a YouTube celebrity. Did we mention that he carried a passenger?

Not everyone got the memo barring students from carrying passengers, as this Texas student pilot demonstrated when he took a passenger along on a night flight in a 300-hp Bellanca Super Viking. Leveling off at about 100 feet AGL (yeah, 100—no missing zero), things went fine until the retractable-gear airplane with a constant-speed prop in the capable hands of a student with dang near 25 hours of flight experience, snagged a power line and plunged to the dirt, where both occupants walked away, unscathed and none the wiser.

Should any of those students ever earn a real pilot certificate—and we’re inclined to hope not—they’ll sharpen their aeronautical decision making skills at least once every 24 months during a flight review, as an Iowa pilot intended in a Piper Archer one September evening.

After fueling his airplane the pilot departed for another airport to pick up an instructor. So far so dull. The two then departed for a little air work, but apparently a little too much, so they diverted to yet another airport for fuel. Good call, but en route the engine sputtered, so the pilot switched tanks and regained power. They then circled the darkened airport but were unable to activate the runway lights, and, on the fourth lap, the engine quit for good. Yup, out of gas—a depressingly routine cause of GA accidents—but at least that prevented a post-accident fire when they pancaked on the darkened Runway X, the one that was NOTAM’d and marked closed for construction. No one was injured, and it’s unknown if the pilot successfully completed the flight review.

But at least the Iowa pilot had attempted to complete a flight review, unlike this Pennsylvania Beech Musketeer pilot who “had not flown for over two years.” That’d be over the 61.56 limits, but a little self-training would sharpen those rusty skills.

With the wind gusting from 210 degrees at 17 knots, the pilot made two “uneventful landings” on Runway 18. Uneventfully landing into the wind apparently wasn’t challenging enough for this lapsed aviator, so he upped the ante and departed on Runway 36. Finding that uneventful, he, then, attempted to prove that landing with a tailwind is just as easy as departing with one. Luck quit being a lady, and common sense wasn’t available to initiate a go-around as the Beech landed long and—to no one’s surprise except possibly the pilot who hadn’t flown in over two years—zipped off the runway’s end and dropped into a ditch. There the pilot had time alone to contemplate the reason flight reviews are kind of a good idea.

Consider the Musketeer in Maryland that was sold by Pilot A to Pilot B, who noticed that one of the two foam cowl plugs was missing. Rather than look for it he decided to remove the other. Having achieved nose-bowl symmetry, proud new owner, Pilot B, moved away and left the Mouseketeer on the ramp for seven months, making several mice and sparrows happy for the winter.

When spring arrived Pilot A (the former owner) volunteered to ferry the Beech to its new home. What a swell guy. But no good deed goes unpunished. Pilot A performed a “thorough” preflight inspection, which included removing two bird nests and other wildlife detritus from the engine compartment. After engine start, taxi and a run-up that revealed no obvious problems, Pilot A, lined up on the runway, opened the throttle and flew—for several seconds, reaching nearly 250 feet AGL—before the engine sputtered, plunging the little Beech into a nearby house.

Post-accident investigation produced yet more bird nests in the engine compartment plus that missing foam cowl plug, “protruding from and blocking the engine combustion air inlet opening.” Additionally, investigators found “a golf ball-size mud dauber wasp nest in the carburetor throat below the main fuel nozzle, which would have also restricted air flow and atomization of fuel in the carburetor.”

Further doubt regarding Pilot A’s decision-making surfaced when it was revealed that he didn’t hold a valid medical certificate. Not that a medical certificate makes an airplane fly, but it does add to the stupid level when combined with the fact that the airplane hadn’t received an annual inspection since 1998—15 years prior. Hope Pilot B got a good deal.

Running out of fuel is so common it’s almost not stupid, but an Aeronca Champ pilot stretched limits to the last dram and nearly completed a 213-mile cross-country flight in Georgia. Mere minutes from their destination, the Champ diverted and landed “to accommodate the needs of a passenger and was on the ground for about 8 minutes.” After off-loading one liquid without taking on another, the Champ departed but ran out of gas and crashed 12 miles shy of the destination, which, doing the math, is about 8 minutes, or one pit stop, short of faith-and-fumes success. Tip: Next time, bring a milk jug.

A wildlife survey team flying an Aviat Husky in Montana came to similar grief when 2.5 hours into the flight the passenger (it’s always the passengers who can’t hold it) said that he would like to “take a (break).” So the pilot attempted to land on a high mesa in tall grass with the density altitude nudging 9000 feet. It got ugly on a rough touchdown, which probably didn’t help the passenger’s condition. The pilot attempted a go-around, but the Husky couldn’t grab enough thin air and slammed through a bush and traveled several hundred feet further before coming to an “abrupt stop” in a heap of broken airplane. One assumes that the need for the passenger’s “break” had been accomplished along the way.

If at first you don’t fail, try, try again. That fits this Cherokee 140 pilot who tried to depart a 2600-foot grass runway one summer day in Missouri. That alone is benign; the 140, with only one on board could easily handle this—assuming the grass wasn’t three feet tall.

On the second attempt, the green-smeared weedwhacker bored its way through the prairie. But failure doesn’t come easily, and the little Cherokee that shouldn’t, slipped the surly bonds of reality to stagger into the air before impacting a stand of trees. No mention is made of how the Cherokee had managed to land there in the first place.

The Last Frontiers Of Stupid

Alaskans fly a helluva lot more than most humans and operate off some mind-bogglingly rough terrains, such as hillsides, glaciers, remote gravel bars, or other unlikely surfaces.

To fully grasp this mishap, mentally play the Northern Exposure theme music as you consider the pilot “attempting to takeoff from a public street” in Wasilla, where he couldn’t get any climb going before smacking into a light pole. The pilot later admitted he’d “failed to remove heavy frost from the airplane prior to the takeoff attempt.”

Texas is a lot like Alaska—big, has some oil, and regulations tend to be interpreted as advisory-only. Witness this Texan in his two-seat Rans Coyote. Even the name says Don’t Mess With Texas, so the non-certificated pilot, who “had not held any kind of pilot certificate since his student pilot certificate expired about 40 years ago” and had “no record of ever having had any instruction,” displayed lone-star confidence and took a friend for a ride. Everything went smoothly until the wheels left the ground, after which the wily Coyote stalled, crashed and burst into flames. No one was hurt, so no harm done, and probably no lessons learned. Bleep-Bleep!

And The Winners Are…

A hearty “nice try” goes out to all those pilots—certificated, current, competent or not—who flew the extra nautical mile to make it into the 2013 semi-finals, including the usual self-inflicted victims of hand-propping experiments, loss of directional control (can’t use rudder) and those, who, while safely on the ground, managed to smash into hangars, fuel docks, or the Louisiana Cessna driver who hot-started her rental 172 and promptly taxied into the FBO’s building. (“I’m baaaaack!”)

The recipient of the 2013 Silver Bent Prop Award goes to the Comanche pilot in Ohio who, without setting the hand brake, started the 250-hp engine, felt the aircraft unexpectedly (Really?) moving forward and took immediate action to ensure a spectacular defeat by advancing the throttle, while reaching for the hand brake. Too little brake with too much power, and the Comanche collided with a hangar.

Reaching for Gold in 2013 was the Taylorcraft pilot in Maryland who “instructed the runway repair technicians to move their equipment so that he could depart from the closed runway that was NOTAM’d as such.” While one might question the logic of that, it wasn’t stupid enough to make the final cut here. The pilot then took off downwind, which as we’ve noted is a common practice for those determined to make NTSB headlines. Something more was yet needed to be a contender and our pilot was determined to find it.

Later, the workers “were surprised when the airplane committed to landing downwind on the closed runway.” We imagine the pilot shouting, “Hey, you kids, get off my runway!” as he landed amid workers scrambling to clear both themselves and equipment from the NOTAM’d-closed runway. This put the T-craft in contention for silver, but when the pilot lost control of the taildragger, left the pavement and smacked a vehicle clear of the runway, our hero claimed the top prize, proving, once again, that it takes true grit in the mental gears to rise above the hundreds of thoroughly stupid tricks we pilots perform every year.