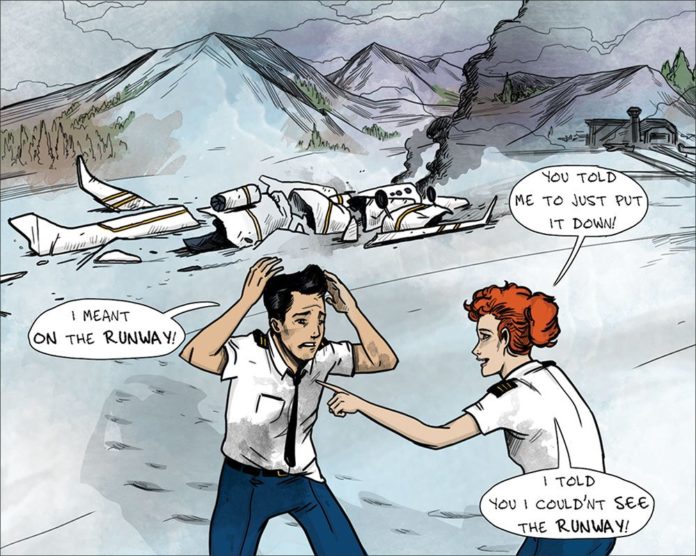 As another year dawns bright on aviation’s horizon it’s time to glance back with jaundiced eye at what our fellow pilots have accomplished in the you-won’t-believe-this department. Each year we scour the latest NTSB accident/incident reports for which probable cause has been determined and cherry pick those aviators who’ve made the supreme effort to ding a wing or to go the extra mile on the last whiff of avgas. We seek the best of the worst—the crme de l’buffoons—who’ve taken pranging airplanes to new lows and survived. We’ll analyze 2009, but given that we pilots try the same spar-bending antics over and over again, hoping for different results (the very definition of insanity), this could be from any year.

Running out of gas is so common it barely deserves a mention, and apparently there’s no cure. Bounced landings, hard landings, landing long or short and loss of directional control eat more airplanes than a Florida hurricane. Again, there’s no cure in sight. Apparently, the gods simply demand that we sacrifice so many aircraft before the rest of us can fly safely. We should be grateful those pilots made that sacrifice for us.

Many are destroyed at the hands of student pilots, so they get a pass, but more than a few happened with instructors on board. You know who you are. So does the FSDO. And just because you have a wallet full of ratings doesn’t guarantee that you—we—can’t do something stupid when least expected, as demonstrated by our first contestants, professional pilots each.

Don’t Try This—We’re Pros
With 2009 only a few days old, a bizjet was making its second attempt to land at a Colorado mountain airport when the bizzillion-dollar bizjet touched down 20 feet right of the snowy runway, instantly and dramatically reducing its resale value while causing only minor injuries.

While that may not seem particularly stupid in the grand scheme (Who hasn’t completely missed a runway?), the last two minutes of cockpit recordings between the two ATPs make the cut. The transcript reads more like a lost episode of I Love Lucy wherein the Ricardos try to land the airplane after the real pilots pass out. The Pilot Flying (PF), Lucy, is in the right seat, while the Pilot Not Flying (PNF), Ricky, occupies the left. They broke out of the 2300 foot cloud deck, and, with 4 miles vis, the crew reported the runway in sight. Eh…sort of.

This advanced CRM repartee continues until the PNF asks the PF if she sees the lead-in lights, to which she replies: “No, I don’t see anything yet.” But non-flying Ricky persists and gets Lucy to finally spot the runway at which point she remarks: “Are you kidding me?”

No, Lucy, unfortunately he’s not. And 20 seconds from touchdown Ricky tells Lucy: “Just put it down. Put it down!” But Lucy, the PIC at the controls of this pending accident, won’t be bullied and says: “I’m trying. Where is it?”
At this point you expect Fred and Ethyl Mertz to enter, but the two ATPs search for the runway alone until Ricky, the Pilot Not Flying delivers the punch line: “(Loocy!) I know you don’t want to listen to me…put it down…don’t float…PUT…IT…DOWN!”

That she did, right into the snow. Oh, Ricky…. (Theme song up, cut to commercial.)

…But We’re Amateurs
While the bizjet took two attempts by two pros to come to grief, a single-minded, single-engine California pilot who’d previously failed his multi-engine check ride, decided he didn’t need no stinkin’ multi rating to fly his Beech Travel Air twin. How wrong he was played out when he publicly demonstrated his lack of crosswind skills on takeoff and swerved off the runway. The two parked airplanes it hit couldn’t resist the Travel Air’s onslaught. But the hangar beyond sure did.

You don’t need two engines to crash, and you’d think anyone flying an airplane called a Flut-R-Bug would be alert for trouble. Alas, no. This California pilot in his experimental Stitts Flut-R-Bug (Go ahead, say it: “Flut-R-Bug.” It sounds more like a disease than an airplane.) experienced a rough running engine and elected to land safely on an empty road located seven miles from his home airport. If only the story ended there.

After some contemplative head scratching and a reassuring phone call to his mechanic, the Flut-R-Pilot decided it was wise to take off and head for home, because, well, you know, rough-running engines cure themselves if left untouched. But fail it did on takeoff, which led this time to a somewhat less successful landing in nearby trees.

When your aircraft is experimental it gives you a license to, well, experiment, and someone in Georgia experimented with this homebuilt D-Fly UL Stork by installing an engine kill switch on the control stick where it’d be easy to reach. So easy, in fact, that the owner inadvertently activated the unguarded kill switch in flight and, sure ‘nuff, killed the engine. After unsuccessful attempts to restart the engine, the Stork landed on a golf course, played through a startled foursome and bogeyed the 17th hole with substantial damage.

Safety tip for all homebuilders: Put the engine kill switch slightly out of reach. Likewise, the wings fall off button. Have we learned nothing from Gary Larson’s Far Side cartoons?

The Stork pilot shouldn’t be too embarrassed because a Robinson R22 copter pilot in Virginia pulled the mixture control knob to idle/cutoff in cruise flight when he’d meant to pull the trim adjustment knob. Not too surprisingly, the engine quit, and the R22 snagged power lines as it fell out of the sky.

The R22 pilot can’t blame the manufacturer, because the POH clearly states: “If the mixture control is inadvertently pulled in flight, engine stoppage will result.” This comes right before the warning: “If you exit the aircraft in flight bad things might happen.”

Persistence Doesn’t Pay
Pilots reaffirm every year that too many of us can’t handle crosswinds. Submitted for your consideration is one Arizona Grumman AA-5 pilot who followed another aircraft to runway 24 at a non-towered airport. The AWOS reported winds from 100 degrees at 11 knots, a 50-degree quartering tailwind. Not surprisingly—to all but the pilot—the Grumman turned final high and fast. Time to admit defeat and go around to land into the wind? Hey, you don’t make it into the Stupid Pilot Tricks semi-finals by giving up in the face of certain doom.

The pilot reported gusty conditions but, according to the NTSB report, “felt he had the landing under control.” Well, every landing is under control until the ground interferes, which it did when the wheels hit hard midway down the runway. The Grumman bounced back into the sky, leaving still more runway behind with tailwind assistance.

The pilot evaluated the rapidly evolving situation, decided, “the airplane was under control” and added power. At last, a go-around! Nope. He added just a smidgeon of power to “cushion” the next runway assault. The airplane impacted, bounced once more into the sky with runway possibilities trailing behind. The pilot reported that with the second bounce being smaller than the first and at a slower airspeed, he saw his opportunity to finally put this baby on the remaining bit of runway, and down they came for the “three’s a charm” landing.

But before being able to congratulate his charm, the airplane swerved off the runway (remember that quartering tailwind?) and plowed through a “drainage swale.” Well, at least he’s down.

Nope. It’s finally time for that go-around. Ta-da! Full power through the swale! On Dasher! On Dancer! On Grumman! Fly! Fly, you wallowing beast!
With airspeed creeping up the pilot slipped the surly swale bonds, retracted the flaps and smacked into the windsock—that no doubt faithfully showed the 11-knot quartering tailwind.

Down came the wounded Grumman, but our pilot wasn’t defeated yet. With his last fading ounce of Aeronautical Decision Making, he pulled up in hopes of clearing the airport perimeter fence. Failure was inevitable, and the Grumman cartwheeled through the tumbleweeds before coming to rest upright, bloodied but not bowed.

But there will be blood if you fly your aircraft toward friends with cameras without taking basic precautions—like not hitting them.

Some amateur videographers in Illinois decided to make a dramatic that-was-too-close video in which a light sport T Bird II flown by an uncertificated pilot with 3.3 hours in type, intentionally flew toward a cameraman seated on the grass runway. The pilot was to narrowly clear the cameraman for the dramatic overhead pass, but our expert pilot couldn’t get enough altitude (three feet?) and smacked the aspiring videographer, who was seriously injured. But they got their money shot.

And The Winner is….
We can’t have a Stupid Pilot Tricks without receiving a lot of entries from Alaska. Problem is, what we might think is stupid down here in the softer 48—such as landing on sandbars, over boulders, up mountainsides, down glaciers—is everyday fare to pilots in the last frontier. Yeah, they have their share of accidents. Face it, if you’re gonna fly in Alaska with the full backcountry experience you’ll face a little extra risk. But you don’t have to be stupid about it.

Piper Super Cubs are popular up there. Great airplanes, easy to fly and easy to fix. Equipped with floats, tundra tires or snow skis they can go just about anywhere and bring you home safely.

The NTSB accident report begins: “The uncertificated pilot…” and gets worse. The pilot says he attempted to land on a mud-covered tidal beach near Palmer. Having never done that I can’t say if it’s a bad decision or not, but the Super Cub nosed over, so I’ll go with “bad decision.” But wait. There’s more. He didn’t tell the authorities the rest.

Seems that before “landing” on the muddy beach, the non-certificated pilot decided to do a little “skiing” across the water. Pictures of this sort of activity are all over the internet. The ski-pilot skims along the surface of the water. Our Super Cub pilot attempted the stunt with the Cub’s over-sized tundra tires. Campers on a nearby beach were so impressed they took video of his half-dozen passes across the water’s surface, including the part where the Cub slammed into the sandbar and nosed over.

The campers ran to the rescue only to be greeted by a pilot who franticly shouted, “Don’t call the cops!” Of course, there’s never a cop around when you need one on a mud bar outside Palmer, Alaska.

The airplane sustained “substantial damage to the left wing strut, fuselage and rudder.” (That doesn’t leave much.) But, in true frozen brain cells spirit the non-certificated pilot corralled some buddies who helped upright the Cub, so he could fly it home. Yes, fly home with “substantial damage” to the aircraft.

Eventually the FAA found out (they watch YouTube, too). Further investigation revealed that the non-certificated pilot had been denied a medical certificate due to previous convictions for driving while intoxicated (DWI). Eight months prior to the accident the pilot had been charged with his fourth DWI.

We have one suggestion for this year’s Stupid Pilot Tricks winner: When you’re being videoed doing something stupid, show some Alaska grit and accept the consequences instead of pleading, “Dude, don’t call my dad.”
As for the rest of us—keep it on the centerline and with enough gas to get home, or we’ll be seeing you in the funny papers.