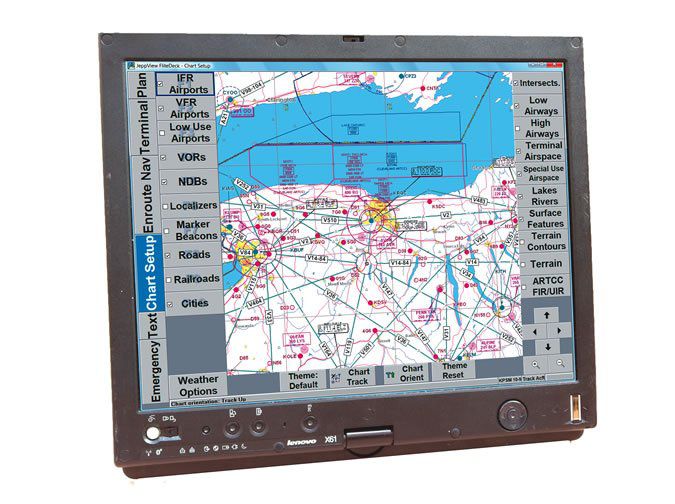 Of iPads and True Tablets
My iPad was shipped the first day the devices were sent to the general public. Why did I buy one? Availability of charts, cockpit management and cost.

Right now most FBOs don’t carry charts, and of those that do, I have the range to far exceed what they are likely to stock, meaning a short hop to the next FBO. Or I can get a subscription service, or I can have them express mailed to me as I need them. The word “hassle” comes to mind.

My first trip with the iPad was from South Dakota to Texas. Being uncertain of the iPad in hard IFR, I also took charts: four Low Altitude charts, IFR Area Chart A1, five NACO approach plate books, two A/FDs, and, just for good measure, three WAC charts. This turns a four-seat Mooney into a three-seater because one seat has to be reserved for the library. In the September 2010 IFR, you said of the iPad, “As long as you can find a place to put it …” Answer: Leave “The Library” at home.

First part of the flight, I was uncomfortable with the iPad. It was new and I was IFR. I kind of stuck with the paper charts, using the iPad only enough to see how it compared. But I quickly concluded that everything that was on the charts was on the iPad, and I could bring it up quicker.

I’ve got the 64 GB 3G, the most expensive. But it works out to about a two-year payback. If you’re using Jeppesen, it’s about a year for payback. And there are no more special orders and express mail expense.

If all you want are approach plates, you have options, but if you also want the En Route and VFR charts, it has to be the iPad for the color.

Yes, the “apps” could stand some improvement, but this is not mature software. Give it time. I’m not buying the eight-hour battery life from experience; take a 12v charger and a backup battery pack (w/4 AA batteries) with you. With the silicone skin, I’ve found that the iPad stays on my knee in flight without Velcro or any kind of holder.

I am comfortable going hard IFR with an iPad and no paper, knowing that my 430W can get me there and find the essential frequencies. A little help from ATC can get me the altitudes for approaches. If the iPad were to fail, I have a workable alternative. And I am firmly convinced that paper charts are going away, like it or not. But is now the time to go minus the paper, or should we wait for the iPad, its apps and its competitors to mature?

You asked, “How About that iPad IFR?” Well, I do not know, nor do I care.
I tried to read this article, but quickly concluded that the inadequacies of the iPad as a computer make it unsuitable for the cockpit.

I fly between 200 and 300 hours a year in a Cessna 421C with a Garmin 530W/430W stack, radar, NEXRAD, lightning detection and terminal traffic detection. I occasionally fly in the right seat of a CJ3 with a nice glass panel.

I do not really think the glass in the CJ3 has anything I do not have in my 421 because I fly with a Tablet PC, a Fujitsu Stylistic, that interfaces with my Garmin 530W via an RS-232 out the back of the Garmin. I run Jeppesen FlightDeck and JeppView on this fully functional yet compact PC computer.

It’s about 14 x 8.5 x 0.75 inches. It has geo-referenced moving maps, approach plates, airport charts … everything Jeppesen sells. I get to see my plane flying around on the maps and taxiing on the ground. I can switch from the en route chart to the arrival chart to the approach plate to the airport/taxi diagram with a touch on the screen. All of these charts can be magnified by the stroke of the stylus. The Garmin overlays my flight plan route and the location of my plane on the map displayed on the PC.

I can see the screen better in direct sunlight than shade, and I can dim the screen for flying at night. Jeppesen FlightDeck even shows the height of the terrain below me and in front of me along my flight path. Switching between programs is a simple press of a button, so I can switch to Microsoft OneNote and use the stylus to write down clearances and notes, read my checklists and record squawks.

I fly without paper, using my computer in my lap instead of a kneeboard. The computer gets power from the aircraft, so I do not need to worry about the battery dying on cross-country flights, but it does have a battery that will last four or five hours if there is an electrical failure in the aircraft. My tablet even has a customized-for-my-aircraft, fill-in-the-blank program for weight and balance with a graph.

Anyway, thanks for the article. It was just a little pass. It seems to me that you ought to be telling readers that there is a real system out there that really works and has been around for years.

Could You Elaborate On That?
I’m a long-time subscriber to IFR, and I relish the arrival of each issue. After more than 2000 hours, three ratings and my own T210 (thanks to a patient wife) I feel comfortable flying IFR, but I know there’s so much more to learn, and your journal helps greatly. Also, I love the simplicity of a magazine all about flying—no reviews of planes I cannot afford, no tedious descriptions of far-away airports I will never visit, no equipment I will never buy. IFR is great. But …

The “Killer Quiz” section causes me some heartache because of what is not in the Quiz. It often introduces me to a new subtlety or nuance that I had missed in my training, all those years ago. But it never elaborates on those nuances. So the learning is always missing the large perspective or context.

For example, the April 2010 Quiz describes the LDA/GS approach into Roanoke, Va. But why is there an LDA/GS approach, and not just a simple ILS? What are the TERPS people trying to tell me here? This is just one example of many just in this Quiz.

My suggestion is to let Mr. Ewing, the “California Johns” and all the other contributors take one question and elaborate a bit on the answer. Show the other options, or the logic behind the answer. Or, give me a reference in a FAR or AIM that I can dig deeper on my own time. That way, I can fill in the blanks.

Again, thanks for a great mag.

Ya know, we used to always put a reference in there and then stopped, as some answers had easy references and some didn’t. We’ll try to weave those back in. We do watch for questions that generate interest and letters, and will turn those into articles.

As for the LDA, usually it’s because there’s some obstacle that prevents an ILS. That could be alignment angle, reception quality, required descent gradient, lighting—the list goes on. You’re right that it should be a heads-up that something here didn’t pass the ILS muster.

Decoding Airways
Your Chart Clinic article “Watch The Waypoints” and the sidebar piece “Turning Airways Into Waypoints” (September 2010 IFR), points up the great utility of the Flightaware.com website. When I file an IFR flight plan, I get an email with a link that takes me to a page listing the en route portion of the clearance likely to be given by ATC. Although the listed route is in “airway” format, as would be read by ATC, I can click on the “decode” link, which then leads to a page listing every navaid and waypoint for that route.

In the comfort of my home I jot down those waypoints and load them into the GPS when I get to the airport. All I need to do then is to make sure that the actual clearance matches the expected clearance—it almost always does—and make any adjustments as necessary.

What is LAAS?
Hello! I received an update for my approach plates today and discovered two new GLS approaches to EWR. The plate contained a reference to LAAS RPI along with its Morse code.

My review of available information on the subject turned up nothing, so I direct my question to you. You publish an excellent magazine! Thank you for your work and dedication.

LAAS is Local Area Augmentation System. These approaches will eventually be the Cat II and Cat III approaches of GPS. We’ll take a closer look at them in upcoming issues.

Got sumptin’ you want to say? Send it our way at
ifr.editor@gmail.com