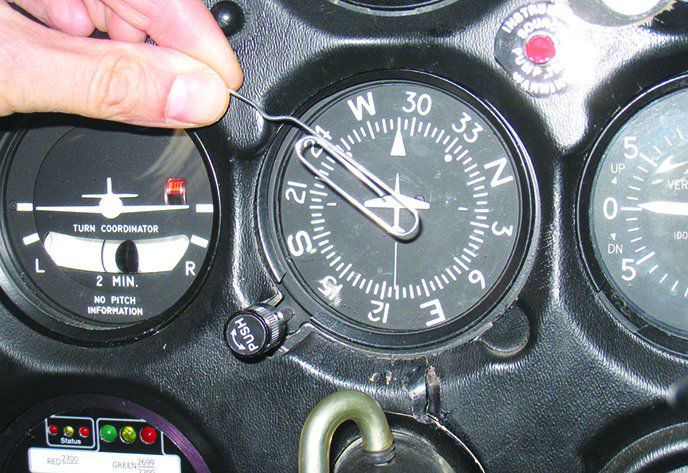 Everyone’s Got a Better Hold

Any dummy can figure that one needs a Direct entry when approaching the holding fix on the hemisphere containing the racetrack. The head scratcher is whether, from the other hemisphere, to do a teardrop or a parallel entry to the hold.

Works instantly with nary a gray hair.

I too struggled with holding entries until I hit on the paper-clip system. Fold out one leg of a paper clip to form a tail. Place the paper clip on the face of the directional gyro with the tail on the holding radial.

With this I can instantly picture the holding pattern as well as the proper entry. For non-standard patterns, just flip the paper clip over.

In one of my first issues of the IFR magazine many years ago, I read about the ultimate holding procedure: Cross the fix, fly outbound one minute, return. It always works for any entry, never fails and it is easy to remember in high-workload situations.

Now comes Rob Christian in the November issue and makes it all complicated again with pens, tears and other FAA parlance. Is there any flaw with the easy procedure? If not, I would say IFR should stick to what is simple and works.

I’ve been an IFR subscriber for a few years and always enjoyed the balance of detailed knowledge and practical perspective. I have two specific questions:

If you depart IFR from a non-towered airport, what amount of airspace is “reserved” for your departure to provide traffic separation and for how long?

Can I legally depart IFR from a non-towered airport and then enter under IMC if I provide my own obstacle/terrain separation until radar contact?

These questions come from my operations from Johnson County in Mountain City, Tenn., (6A4). Nestled in a valley, the airport often has mountain microweather and fog/obscuration, especially in the morning. I have been departing under VFR until I reach an altitude where I can get radar services and pick up my IFR clearance and go IMC.

When the overcast is low, the ceiling is typically just at the top of the surrounding peaks of about 4000 feet. Having flown in this area for a few years, I’m now comfortable flying below the peaks in decent weather and know where the big obstacles are. I have a Garmin 396 with obstacle/terrain avoidance and it correlates well to my experiences when VMC.

To enlarge my operational envelope, I’m wondering if I can get a telephone-based IFR clearance on the ground and then depart VFR but go IMC before radar contact, using my terrain mapping of the 396, or, maybe following the reverse guidance of the two new GPS approaches at 6A4. Unless that sounds suicidal, my only worry is other IFR traffic, hence my first question.

I would, of course, be cautious in using such procedures, but I think under certain conditions, I can conduct a safe IFR departure and then settle into the comfort of the en route structure.

Once you have the clearance and are past your release time, you can go IMC right after takeoff. There’s no requirement to be on radar. An appropriate radius around the airport is reserved for you and no other IFR traffic is allowed in until you check on with ATC and they know where you are.

Getting up into the en route structure is up to you. You could use the techniques you described, but a better choice is to follow the published departure procedure. Not all airports have one, but 6A4 does, on the Jepp airport plate or in the front of the NACO approach book.

Once again, your magazine is indispensable for learning the ins and outs of safe IFR flying. A case in point is how we can be seduced by some new technology while not realizing how that same technology, if not configured for intuitive use, can lead to dangerous situations.

Ian Blair Fries is absolutely correct when he says that G1000 is about halfway there (“G1000 Wishlist,” November 2009 IFR). G1000 has lots of information and a sexy format, which may put it in the “G-Whiz” category, but when it comes to retrieving that information, it lacks a lot. Basically, there are just too many steps of pushing, highlighting, turning left and turning right of the knobs, then highlighting again, moving the highlight up and down—all in very “knobish” and counter-intuitive ways.

Furthermore, the little non-ergonomic buttons are difficult to get to in turbulence and it’s easy to intend one and push the other. I usually have to let go the yoke (and let George do the flying, being lucky to have him), steady one arm with the other hand, and aim at the intended button before the next jolt comes. Finally, I really miss the steam gauge especially on an ILS approach where I can watch the two needles come together to the center of the same dial, in contrast to scanning back and forth between the glide slope indicator on the tape and the localizer on the HSI.

It’s great to sit back and watch George do all that for you, but when the time comes to take over, it becomes difficult to execute the approach. As for the missed approach, that’s another story. I think a major do-over of the whole programming approach to making that wealth of information that is now available really intuitive and much more useful would be in order.

Since the approach is not yet activated, the guidance is to the next waypoint in the flight plane while the “fake” approach is ready for use in case of emergency. Simply press the PROC button and activate it. The “fake” airport and its approach can later be deleted..

Keep up the good work with your magazine.

I know you do not usually have a graphic for “On the Air” but I had to pass this TFR on to you.

We have a lot of bean eaters here in Wyoming! This is the most unusual TFR ever!

I am a physicist and pilot examiner and believe I could be convinced to accept a hot-day adjustment, similar to those made if the altimeter is different from the field elevation when set, but that delta would set a new, firm floor for an approach. Also, note that the delta should be readusted if significant temperature changes occurred during the flight (could be 10 feet or more day to night at 5000 feet in the desert).

Definitely fun to work out.

There are other problems with eAPIS not covered by Lee Smith’s article (“Over the Line With eAPIS,” December 2009 IFR) that those of us who fly into Mexico for an eleemosynary purpose have encountered.

My passengers have provided me with their statistical information that I feed into the system by cut and paste. On two occasions, there have been errors found by the Customs officer, which I suspect originated in the eAPIS system. Regardless, I have been threatened with a $5000 fine for a typographical error!

Should such a penalty ever be levied, it will have a chilling effect upon the charitable efforts that support the impoverished citizens south of the border. I, and the others with whom I fly, have found eAPIS to be a cumbersome, non-user-friendly system that is unlikely to capture terrorists though is quite effective at stripping away another layer of privacy we used to enjoy.

If you have tips, horror stories or gas releases to share, email them to ifr.editor@gmail.com.