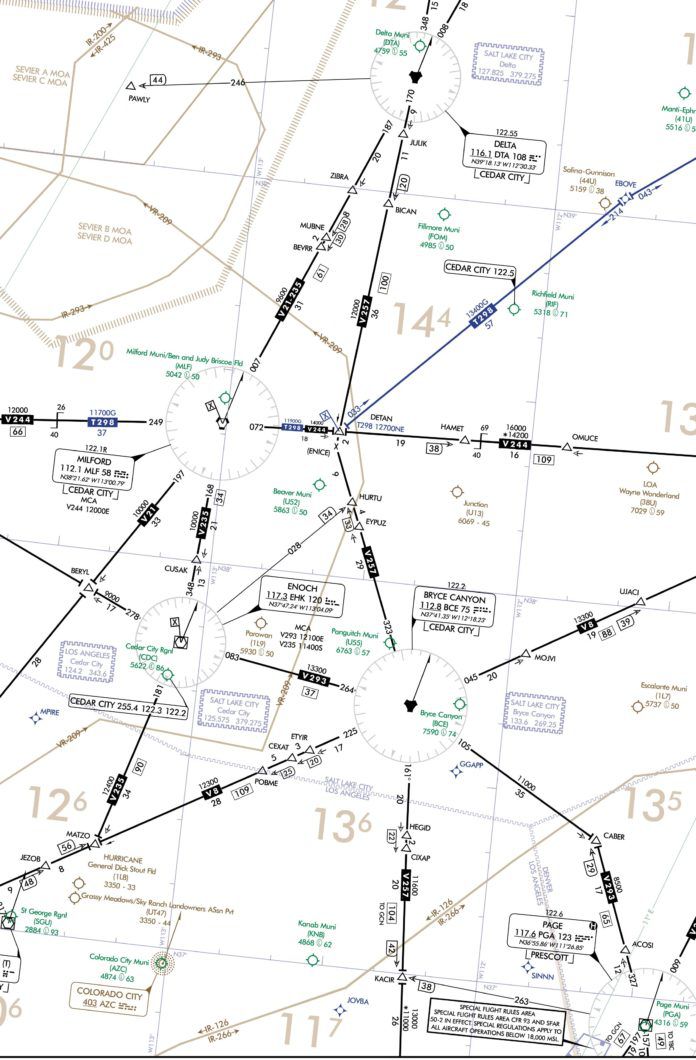 We’ve done our best with these sim challenges to accommodate older sim setups that lack IFR GPS. That’s a challenge itself in an IFR world ever more dependent on RNAV. Today, however, everyone is in the same boat—a leaking one with one chance to avoid “swimming with the fishes.” And nobody gets to use “RNAV (GPS).”

Assume you’re near the end of a flight bound for Richfield, UT (KRIF). You are southbound on T298 at 14,000. Salt Lake Center clears you for the RNAV (GPS) RWY 19 approach, crossing EBOVE at or above 12,700 and the usual missed approach instructions. As you pass 13,000 Salt Lake gives you a “radar contact lost.”

You skillfully cross EBOVE descending through 12,700, and something else gets lost: GPS.

We don’t know why your GPS is telling you to use alternate navigation. All we know is that Richfield is a non-starter because the only approach requires GPS. To raise the stakes even more, say that you can’t use your sim DME because you’ve replaced that with GPS. We’ll throw you a bone and say you have a working ADF because the thing refuses to die, and you can’t throw away something that still works.

Richfield was forecast to be overcast 2000 or better all day, so you didn’t file an alternate and didn’t carry alternate fuel. So that’s the situation: 12,700 MSL at EBOVE, no GPS, no DME. Even turn off GPS location on your iPad if you have that. (In ForeFlight, this is in settings, scroll to the bottom, and set “Enable Ownship” to “Never.”) Give yourself 45 minutes of fuel at normal cruise. No one said you were good at planning.

Now you need to find an airport with terrestrial navigation you’re equipped to fly, get there, shoot the approach, and land in 45 minutes or less. Set the winds aloft for 9000 feet at 360 at 30 and 12,000 feet to 030 at 35. That will factor into your decision (and chance of success).

You can go anywhere you want in this set up, but here are three we like, with suggested interesting weather.

This is your nearest option. The only approach you can fly is the VOR Rwy 35. Let’s make the weather a challenge with winds 360 at 10, visibility 1 SM BR, and an overcast ceiling at 1000. (Be sure to convert all ceilings from AGL to MSL if your sim requires it. Most do.)

1. What altitude did you fly to KDTA and how did you select that?

2. What route did you fly to get to KDTA and how did you join the approach?

3. If you flew the PT, how far out did you go by time? How fast were you flying?

4. How can you estimate distance to the VOR for stepdowns without DME or GPS?

5. This approach has 4.4 miles after the FAF to descend to MDA. Some approaches aren’t so kind. Can you better detect VOR crossing with only one VOR station?

6. How close were you to the real MAP on your timing?

7. Did you see the airport in time to land straight in? How could you anticipate that?

8. What’s with Cedar City Radio on the approach chart?

There’s an ILS at Cedar City, but the weather is still near minimums. Set the weather to winds 010 at 08, visibility 1/2 SM BR, ceiling overcast 300.

9. Did you go directly to EHK or MLF? Did you change your mind en route after thinking it through?

10. How did you join the approach?

11. Did you remember to turn on the lights?

12. How did you account for the winds when flying the ILS?

13. If you had GPS, would that be legal substitute for “Dual VOR required”?

You lose GPS in Utah, and travel to Colorado City, which is actually in Arizona. You know that’s going to take a while, and you only have 45 minutes of “while” in the tanks. We’ll make this the third option by saying that Page, AZ is below mins. Everything else down that way needs GPS or DME. Some long straight-and-level is good for everyone—and it gives you time to appreciate how you got used to that moving map. Weather to set: winds 340 at 10, visibility 2 SM, ceiling overcast 2500.

15. What kind of procedure turn did you use?

16. For those who flamed out: How would you attempt to land if you hit fuel exhaustion at 9800 feet over the beacon?

2. The obvious route is direct to DTA, then outbound for the procedure turn. The challenge is descending from 11,600 to cross the VOR inbound at 6200—all with a wind blowing you out of the 10-mile limit. An alternate tactic is estimating your position with crossing radials from DTA and MLF to head west and intercept DTA R-170. So long as you’re confident you’re inside BICAN, you can descend to 7300. You can even use VOR sensitivity to estimate inside JULIK (see below).

3. You have 5400 feet to lose. The tailwind outbound on the PT buys you some time when you turn back inbound, so that adds a little buffer. Try dividing the PT into four sections. Each requires 1350 feet. Cross the VOR and descend aiming for 1400-1500 fpm. Watch both the time and the altitude. Make your turns as you complete each altitude section, rather than time. Slow your airspeed (and subsequent groundspeed) as much as practical to help ensure you stay within 10 NM of the VOR. Later, look at your ground track on the sim and see how far you really went.

4. BICAN is roughly MLF R-020. That’s not official, but this is an emergency. For JULIK, the closer you are to the VOR, the closer radials are together. Test by turning 90 degrees left for 30 seconds and seeing how far off course you go. Then turn around and come back. With a 120-knot groundspeed, in 30 seconds you’d go a mile. At 10 miles from the VOR, a mile is six degrees. JULIK is at nine miles.

5. When every second counts, set your number two VOR to 90 degrees off the inbound radial. Unless you fly perfectly over the station, you’ll see that radial swing before you see full station passage, but that swing means you are past the VOR.

6. Timing: a lost skill requiring estimation of groundspeed. Good luck with that.

7. The chart has a VDP at 2.2 miles from the runway. Given the visibility of a mile, you can guess it’ll be at least a six-degrees descent to land straight in. Expect to circle.

8. Don’t see that every day. Flight Service controls the approaches into and out of this airport. You’ll—normally—talk to them for your clearance and on the missed.

10. There’s a lead radial off EHK for the DME arc, but it also defines WISEB where you can drop to 9100 and get a three-mile warning of intercepting the localizer. Intersections on the localizer are all from EHK, which could help situational awareness.

11. The approach lights are always on with low vis in most sims. In the real world, remember to refresh the lights with seven mic clicks or you’ll never find the runway.

12. You’ll have a diminishing tailwind, so you’ll have to keep reducing your rate of descent for a steady indicated airspeed on approach. Best to be ready for that as you’ll continually drift low on approach otherwise.

14. Again, the logic is direct EHK, then R-181 to MATZO, then a bearing of 131 to AZC. But if fuel were really an issue, you could estimate a heading for direct MATZO and use crossing radials from EHK and BCE to ensure you pass between them. Intercept the 131 bearing inbound and descend to 9800 for that feeder route. Radials off BCE let you monitor your progress and anticipate station passage for the PT.

15. With 2000 feet to lose, it’s tempting to keep it really tight, but note there is no inbound leg after the beacon. So you must plan to reach MDA with enough distance from the airport to find a runway and circle to land.

16. Fun challenge: Spiral down in the clouds with just enough angle to keep the bearing pointer directly off your left wing. With about 2000 feet remaining, turn directly to the beacon and glide over the airport. Note your descent rate and turn back in a teardrop with about 1000 feet remaining. Land somewhere—hopefully on the airport.

Jeff Van West remembers the sweaty anxiety of constantly estimating position by crossing radials because he wasn’t special enough to even have DME. Or so he thought until getting GPS and discovering he’s still sweaty.