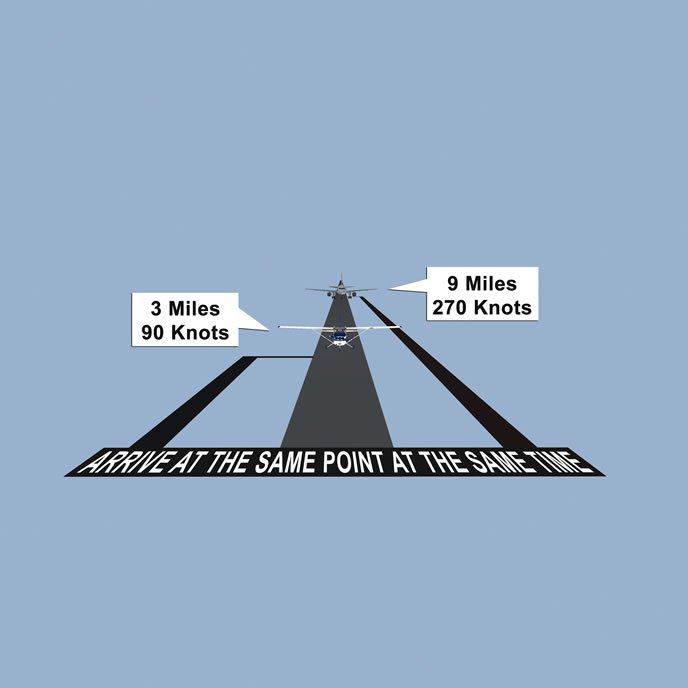 It’s a signature moment in the classic 80’s beach-volleyball documentary Top Gun. Two Naval aviators swagger past a parked line of Grumman F-14 Tomcats. “I feel the need,” Tom Cruise’s Maverick character declares to his buddy Goose, who joins in the chorus. “The need… for speed!”

Mav and Goose were bragging about the sound-barrier-busting velocity only a few pilots get to experience. Still, whether your winged ride’s top speed is Mach two or 100 knots, there is one universal truth: if you’re firing up an airplane, you’ve probably got somewhere to go or a mission to accomplish.

That “mission” may be a local sightseeing trip, a training flight or a business trip. Perhaps it’s carrying passengers to point B or a critical air-ambulance run. It’s nice to complete it with as little delay as possible. Greater speed usually equals time saved.

If there’s nothing but blue sky ahead and around an aircraft, we air traffic controllers usually don’t care if the pilot firewalls the throttle or hangs back on the edge of a stall. As a pilot myself, I just want to do my thing when I’m up there.

However, once an aircraft joins a sequence of other airplanes, ATC needs to ensure safety and order. Speed control is a huge part of that. We’re not just randomly pulling back on the reins. There’s a lot more thought that goes into it.

Remember math word problems? The ones I recall most dealt with conflicts. “Two trains leave City A for City B on the same track. One is travelling at 50 mph. The second one leaves half an hour later, but is travelling at 60 mph. If the cities are 200 miles apart, where will the second train catch the first one?”

Every minute a controller is sequencing aircraft, he’s solving problems like these in his head. In his case, though, he can’t let the second plane catch the first. So, he calculates how close they’ll get, and adjusts speed as necessary.

Most people are familiar with the term “miles per hour.” When controllers line everybody up, we only work the aircraft over a relatively short time and distance, so we use “miles per minute” instead. It’s similar math, but on a smaller time scale.

Picture a Cessna 172 on a six-mile final, indicating 100 knots into a ten-knot headwind. That 90-knot ground speed carries the Cessna 1.5 miles per minute (mpm). After travelling 4.5 miles in three minutes, he throttles back to a 60-knot final approach ground speed, or one mpm. That last mile and a half to the threshold will take him 90 seconds. So, he needs 4.5 minutes from a six mile final to touchdown.

Now the controller gets handed an Airbus A321 to sequence behind the Skyhawk. The airliner is 14 miles from the airport versus the Skyhawk’s six, but showing 240 knots over the ground (four mpm). Let’s say the controller takes no action. The ‘bus maintains 240 to a four mile final, where it quickly drops to a 120 knot (2 mpm) ground speed.

“Spirit 621, number two following Skyhawk on six mile final. Reduce speed to one-six-zero knots.” With the ten knot headwind, capping the jet’s ground speed at 150 knots (2.5 mpm) gives us a working solution. The airliner’s new formula is (10 miles 2.5 mpm) + (4 miles 2 mpm) = 6 minutes to touchdown. That gives the Skyhawk a minute and a half to land and clear the runway before the Airbus comes over the numbers—plenty of time.

Aircraft performance characteristics obviously play a huge role in sequencing with speed control. A controller has to be aware of aircraft types and their speed limitations. Assigning 100 knots to a B-757 will be as equally laughable as telling a Piper Cherokee to maintain 210 knots or greater.

Section 5-7-3 of FAA Order 7110.65—the ATC rulebook—addresses speed restrictions. For arriving piston and turboprop aircraft operating below 10,000 feet, the recommended minimum assigned speed is “not less than 200 knots; except when the aircraft is within 20 flying miles of the runway threshold of the airport of intended landing, [then] a speed not less than 150 knots.” (Helicopters have lower minimums, of course.)

Speed restrictions can also be imposed on outbound traffic. For departing turbojets, the recommended minimum is “a speed not less than 230 knots.” Props get “a speed not less than 150 knots.” Departures want to get up and go, but if a preceding departure isn’t accelerating or climbing fast enough, ATC may need to put the brakes on anyone in trail that’s headed in the same direction. There may also be situations where an adjacent facility requires additional spacing.

Note that these are all recommended minimums, not absolutes. “When an operational advantage will be realized,” the book goes on to say, “speeds lower than the recommended minima may be applied.” Such was the case earlier with the arriving A321. He was restricted to 160 knots, below the 170 knot arriving jet recommendation, to create adequate in-trail spacing with the preceding Skyhawk.

Section 5-7-3 gives pilots an out if ATC makes an unreasonable speed request: “If a pilot is unable to comply with the speed assignment, the pilot will advise.” Your safety comes first. If an ATC speed instruction takes you to the edge of your performance envelope, you have every right to say “unable.” Just let us know ASAP so we can make alternate plans.

It’s also more difficult for an aircraft to slow down while it’s descending. When the nose goes down, the speed tends to come up, unless the pilot creatively balances flaps, attitude, power, and other details. Obvious as that seems, 7110.65 5-7-2 reminds controllers, “Simultaneous speed reduction and descent can be extremely difficult, particularly for turbojet aircraft. Specifying which action is to be accomplished first removes any doubt the pilot may have as to controller intent or priority. Specify which action is expected first when combining speed reduction with a descent clearance.”

As the book says, we assign a priority. The most important thing for us when sequencing to final is ensuring adequate in-trail spacing between arrivals. The vertical component is largely secondary. So, we usually instruct the pilot to slow first—securing proper in-trail separation—and then descend to the assigned altitude. A sample call would be: “Columbia 43AG, reduce speed to 130, then descend and maintain 2000.”

Airspace speed limits play a part. Let’s say that A321 from earlier was at 15,000 feet and 350 knots. If I descended him to 7000, I must account for him bleeding off a hundred knots before he pops below 10,000 feet. That matters if I’ve got someone else close behind him.

In practice, approach controllers will commonly use a step-down method, where aircraft bleed off speed gradually the lower they descend. You’ll see this plenty in busy Class B or C airspace. Those controllers are being fed high performance aircraft from all directions and altitudes, and it’s their job to blend them into a single line to the runway. This rigid flow structure means every aircraft gets the same speed and altitude at certain points, transforming chaos into order.

ATC can cancel a speed restriction in a variety of ways, the first being a simple phrase: “Resume normal speed.” That removes any previous ATC-assigned speed requirement. However, if you’re flying on a route with published restrictions, you’ll still need to comply with those.

On that note, there’s “resume published speed.” Many Standard Terminal Arrival (STAR) and Standard Instrument Departure (SID) procedures have built-in speed restrictions for portions of their route. For sequencing, ATC can issue an aircraft on that route a different speed than the one published. Once that alternate speed is no longer required, the above phraseology instructs a pilot to assume the speed listed on the procedure.

And finally, 5-7-1 decrees that ATC cannot assign any speeds at all, “Inside the final approach fix on final or a point five miles from the runway, whichever is closer to the runway.” You’re landing. You need to slow down, configure the plane and land. That restriction exists so you’re not burdened with speed restrictions during that critical phase of the flight. That’s why many final speed restrictions are worded as, “Maintain 140 knots to the final approach fix.”

I encourage you to download 7110.65 section 5-7-1 to see a variety of additional speed control phraseology and applications. It’s not by any means a light read, but it gets the job done. Speed control is a nuanced thing, a necessary evil and effective tool for ATC. You may be like Maverick and Goose, and need your speed. However, if you’re not number one in the sequence, you may need a bit of patience instead.

Out in the Midwest, things move kinda slow, but Tarrance Kramer prefers to keep traffic flowing as fast as safety allows.