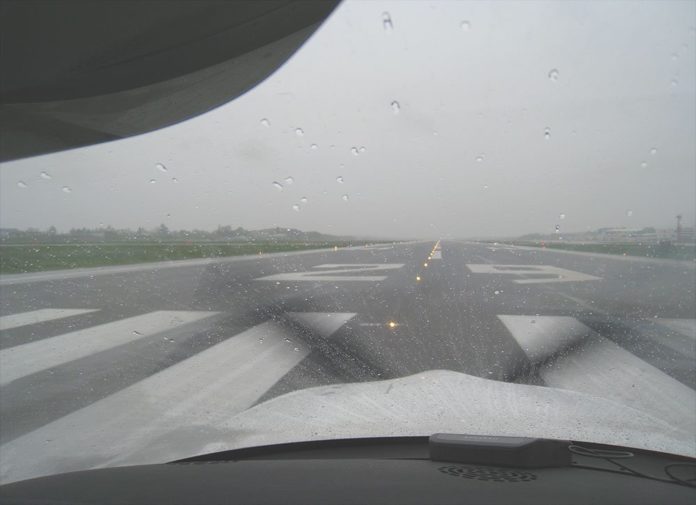 Making IMC Transitions
It’s often less than a minute of flight at the beginning and the end, but screwing it up can be expensive at best—and fatal at worst. The key is trusting instruments over eyeballs.

Mark Twain once said, “If you hold a cat by the tail, you learn things you cannot learn any other way.” That’s also true of flying a Cat I ILS to minimums. No amount of training, except maybe in the best simulators, prepares you for what it’s like to reach DA and see … very little.

The fact is that most instrument training goes from visual to instruments and back to visual like the flip of a switch, or the flip of a visor. That’s rarely the way it happens in the real world of IMC and it sets a bad precedent. Even experienced pilots get suckered into several awkward moments of a poorly executed switch. Awkward flying is undesirable any time. But it’s a potentially catastrophic close to the ground.

Whether you’re transitioning from visual to instruments on takeoff, mixing the two when en route, or going back to visual for the final landing, there are a few, simple techniques to make it a less stressful experience than grabbing Fluffy by the tail.

Look Down, Rotate
Many pilots have a couple moments of sloppy attitude flying just after they enter the clouds and mentally settle down and fly via instruments with precision. This isn’t just a newbie problem. Even many experienced pilots do it.

Pilots who always make a butter-smooth transition from visual to instruments tend to have one thing in common: Autopilots. Just kidding. Well, sort of. More pilots would probably experience the sloppy transition without so many autopilots.

Those who can do it smoothly without artificial support usually employ the powerful technique of transitioning to instruments at or just after rotation.
While it wouldn’t seem this would make a big difference, it does. Why is it that flying by the gauges in real IMC is that much harder than flying under a hood?

It’s two-fold. Under the hood, you still have a bit of peripheral vision giving you reassurance the real airplane is as right-side up as your attitude indicator claims. You also know that if you got really confused, you could just look outside. Having the pressure off makes the act of attitude flying easier.
It’s the same way on a low-visibility, low-ceiling takeoff. The more time you have flying on instruments with the real world still in the corner of your eye, the easier and smoother those first few moments of attitude flying are.

Unless you have one of those fancy synthetic-vision systems, you have to look outside during the takeoff roll. (And even with one, you should, because deer, pilots taxiing across the wrong runway, or lost airport service vehicles aren’t in the synthetic-vision database.) But the moment you begin to rotate, you don’t need to look outside if within five seconds you’ll be IMC. Focus those seconds getting settled in on the gauges.

Living In Between
Another world you don’t really understand until you experience it is riding along between layers. This can be a deceptive realm, where horizons slope in directions gravity never intended.

The consequences for getting duped and trying to fly crooked usually aren’t that severe. You may find the airplane wants to wander off heading and climb when you swear you’re straight and level. A quick look back at the instruments shows you’re not. Avoid the trap by keeping on the gauges much of the time even though you can see maybe miles ahead in this aerial landscape.

Also use the same rule for switching early to the instruments when you have to re-enter the clouds with an altitude change or just because the open space closes up. Transition to focused attitude flying several seconds before the aircraft reenters the muck.

Scan Weaning
The final transition from instrument back to visual flying can be the toughest, often because it’s the slowest and most amorphous.

A clean breakout from a uniform cloud deck into good visibility is simple: Identify the airport, assess that you can fly visually the rest of the way and then proceed. Because even good visibility on a cloudy day can make for flat light that hides towers and other plane catchers, it’s best to stay on as much of the approach as practical in terms of altitude and course until you have a good visual slope to landing. Remember that a PAPI or VASI only guarantees obstacle clearance within four miles of the runway threshold.

Even here, remember that if you don’t identify the airport quickly, it’s time to return to focused instrument flying and ensure you haven’t drifted off course or below altitude while you were looking.

Level at MDA with ragged bases but good visibility beneath is even tougher, as you need true split attention between inside, to stay on altitude and course, and outside hoping for a gap big enough to see clear to land. But in either case, think of it like a trapeze act: Only let go of one sure thing (the instrument approach) once you have a firm grip on the next thing (a good, clear, visual path to landing).

A true low-visibility approach is the toughest of all because there may be no clean transition from instruments to visual. If you notice the approach lights just starting to clarify out of the miasma, conventional advice is to go back to instrument flying and don’t change a thing. While true, this advice is a bit lacking. At some point you have to go visual. So when is it and how do you choose?

The solution is really two parts. Whether attitude flying or visual, you must have acceptable references for roll and pitch. When you first see some approach lights, you’re likely to have neither of those two references by sight.

You’ll see the lead-in lights and, maybe, the first “roll bar’ as it’s sometimes called on ALSF-type approach lights. This is a row of white lights perpendicular to the approach lights leading to the threshold. The roll bar gives you a visual reference to level ground and your roll angle relative to the runway. But the roll bar doesn’t make enough horizon for visual flight. So you see the lights, reassuring you the runway is “thata way,” and you return to the instruments.
As the complete approach-light system emerges, you now have much more roll information because you can see the perpendicular lights all the way to the green threshold bar—probably enough you could keep the aircraft upright. You can also gauge whether you have required visibility for landing. But until you have a PAPI or VASI, you still don’t have good pitch, or descent-angle, reference. Back to the instruments.

Once you have the PAPI/VASI, you should also have some runway side lights, so now you have enough visual information to continue visually. You don’t have to switch cleanly, though. You can return to the instruments for one last check. That’s not a bad idea. It’s just that, by this point, you can solidly make the transition.

By “continue visually,” I really mean, you should adjust and tweak only to the amount required. You should be on a stable glidepath that brought you from glidepath intercept down to this point. You’re only making minute adjustments to that to stay centered laterally and vertically on the approach until it’s time to reduce power and round out for landing.

Part of the beauty of this concept is that it works with non-precision approaches, too. To descend below MDA, you need everything in FAR 91.175 as always. But you also want enough visual information to keep your roll level and get a visual reference for glidepath. Partly that comes from the shape the runway lights make, just as with night landings. But ideally it’s a clear VASI. Again, the execution is a hybrid of a smooth descent referencing instruments combined with guidance from what you see outside.

Oops, I Lost It
Trapeze artists do occasionally miss, which is why the ones with longer lifespans use a net. Your net is the missed approach. If the visuals go south, or even just don’t make sense somehow, go missed. There’s just no time for puzzling something out when you’re this close to the unforgiving earth.
Twain also said this of trouble: “It is easier to stay out than get out.” Taking the unnatural action of hurling yourself through space without seeing anything beyond your arm span could be construed as looking for trouble. But you can hedge your bet at the start and finish by being smart about how you dive in and step back out.

When You’re only going IMC for the final 30 Seconds
One oddball visual transition is when there’s a fog layer over your destination on what is otherwise a perfectly clear day. It’s a gotcha in two ways because it’s a super-short flight on instruments and it’s a common spatial-disorientation issue.

Pulling a late shift with another pilot heading back into Seattle at about one a.m., we got our enjoyment of a still, clear night popped by an ATIS of indefinite ceiling 100 and an RVR of 800 feet. We were Part 91, so technically, we could shoot the approach. But minimums were 250 and RVR 5000, so it seemed pointless.

As we got closer, though, we could see the mist was actually thinner at the northwest end of the field where the ILS would take us. We decided to give it a shot; I’d fly and—we’ll call the other pilot “Cristy”—would watch for any signs of runway.

The air was dead calm, so my ILS approach was test-signal centered and solid right down to the cloud entry at about 350 feet. Then I got hit with an overwhelming sensation of pitching backwards—so much so I felt like I was going to flip upside-down. It turns out this is a common visual illusion when entering clouds at an angle from above. If I hadn’t been completely focused on the instruments, I doubt I could have suppressed the urge to pitch the airplane forward—not a life-extending move at 300 feet AGL.

Cristy called lights in sight at 250 and I looked up—and saw so few pathetic, little, glowing orbs. I just looked back down and let another 150 feet tick off. Looking up again, I saw sort of enough to land. I was pretty inexperienced at the time and didn’t really process this wasn’t RVR 5000 and we were supposed to miss. To Cristy’s credit, she simply asked, “Do you have it?” and let me complete the landing even though she was far more experienced. Maybe she just wanted me to be the one who busted regs getting us home that night.

We touched down smoothly and rolled out into even denser fog. Tower asked us to report reaching parking, which sent a moment of “We have a number for you to call” panic through us until we realized it was simply because they couldn’t see us once we taxied down to the south end of the field. The fog was too thick. —JVW

Forget a trapeze, Jeff Van West never really mastered monkey bars. But he has learned a thing or two about cats.