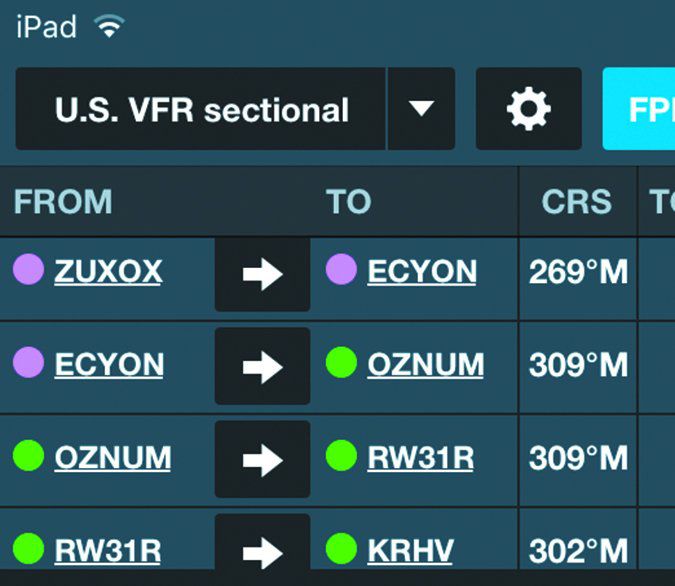 Instrument flight is a game of single degrees, so it should get your attention when numbers don’t match. We’re used to this when flying VOR radials with GPS. The magnetic declination of the VOR is infrequently updated, while GPS calculates it exactly from the latest data and the current location. This can be disconcerting on a VOR approach where the GPS you’re using for situational awareness (or, the actual approach, now that you can) shows a course several degrees off from the chart.

What we don’t think about too often is that airports have magnetic declination assigned to them as well, and it’s not just for the runway numbers. The FAA also uses it for RNAV approaches—and the GPS navigator doesn’t.

Contemplate the RNAV (GPS) Z Rwy 31R at Reid-Hillview (KRHV) in San Jose, CA. The sequence of courses from ZUXOX to ECYON, and then ECYON through OZNUM to RW31R are 267 and 307. Now review the approach loaded into the GPS or your tablet and you’ll see courses of 269 and 309. (See ForeFlight inset.) Everything on the RNAV (GPS) Y Rwy 31R approach differs by two degrees. This is because the GPS calculates the exact declination, which is about 2.5 degrees off the fixed FAA one.

It’s about seven miles from OZNUM to the runway, so how much could two degrees matter? Figuring a divergence of roughly 100 feet per degree per mile, that’s a lateral difference of 1400 feet. At DA on this LPV approach, 1400 feet laterally is well past full-scale deflection.

Except that won’t happen if you just keep the CDI centered. The position of the waypoints is identical on the chart and in the GPS. Therefore, the black line on “paper” and the magenta one driving your CDI match perfectly. It’s the computed magnetic course between the waypoints that differs because the assumed declination is different. The GPS is technically more current, and is probably a better match to what your compass shows. (Compass? Whassat?)

It’s always good practice to review the waypoints when you load a GPS approach to ensure they match the approach chart. I’ll admit I never made it a practice to also note the GPS courses. For that reason, I never noticed this discrepancy on GPS approaches until I started loading them on my iPad where the disparate numbers appeared on the same screen.

This isn’t a safety issue so much as a curiosity. Fly the needles and all is well. But it’s certainly something you want clarity on before noticing during final descent next to the mountains.

A “Z” approach means there’s at least a “Y” approach to the same runway, usually on the same final approach course. The most common reason for a Z version is lower descent minimums enabled by a higher climb gradient on the missed. You get to go lower if you can climb steeper if the approach doesn’t work out.

The Z is way lower here with a DA of 379 feet AGL versus a whopping 1209 feet AGL for the Y version. However, in this case the difference isn’t climb on the missed. It’s precision on the approach. The Z approach allows only LPV, which is ILS-like accuracy with mandatory vertical guidance. Most RNAV (GPS) approaches offer an LNAV version, akin to the localizer-only version of an ILS. Not here. Concurrently, the Y approach is LNAV only with no option for LPV.

This detail is important for two reasons: First you must have WAAS to fly the Z approach. Second, there’s no downgrading of that LPV approach if the GPS can’t establish full WAAS accuracy. Either it annunciates LPV, or you go missed and get a new clearance for the Y version instead.

I checked with Garmin and both the GTN/GNS navigators and the Gx000 integrated flight decks know LNAV isn’t an option on the Z approach. Normally they will annunciate “LNAV” and flash a message “Approach Downgrade” if they can’t offer WAAS accuracy but still have acceptable GPS position. In this case, if they can’t confirm LPV, they will send a message for you to abort the approach.

It’s funny how these approach reviews often reveal themes. For Reid-Hillview it’s pairs that don’t quite match. In addition to the differing courses and approach types, there are the obvious parallel runways. They have almost the exact same layout and orientation to San Jose (KSJC) just five miles further to the northwest. If you don’t want to be mistaken for an errant airline pilot, don’t get confused by the airports with similar layouts. (Tip: KSJC has longer runways.)

There are two tower frequencies. Make sure you grab the right one when you brief the approach or you may have a hurried switch when you make first contact. For that matter, you might want both frequencies dialed in somewhere just in case you get switched from one runway to the other. Dual frequencies are a sure sign of a busy airport.

You usually associate busy with big, but these runways are kinda short to begin with and sport large displaced thresholds. Note at the top of the chart that your available landing distance is only 2690 feet. That’s not something you want surprising you at 400 AGL with wet pavement after you kept your speed up for traffic—in your heavy twin.

A tipoff to this is that the LPV approach glideslope is 3.5 degrees with a threshold crossing height (TCH) of 59 feet, yet the visual glideslope indication (VSGI) is a steeper four degrees with a TCH of only 45 feet. The only way that’s possible is if they are bringing you to different touchdown zones or they’re talking about different thresholds. I’m betting on the latter and appearing low on the PAPI when I break out.

One last curiosity that has me wondering is how the runways can grade uphill 0.4 degrees toward the approach end, yet the touchdown zone on that approach end can be four feet lower than the official airport elevation, which is usually at airport center.

Maybe there’s another kind of airport datum math where two authorities use different methods. Or maybe it was a mound of dirt from the runway construction that just didn’t get smoothed out. Not that it matters. Even in a game of degrees, I won’t lose any sleep over four feet.

Jeff Van West hates it when the numbers don’t match up, especially combined with the words “funds available.”