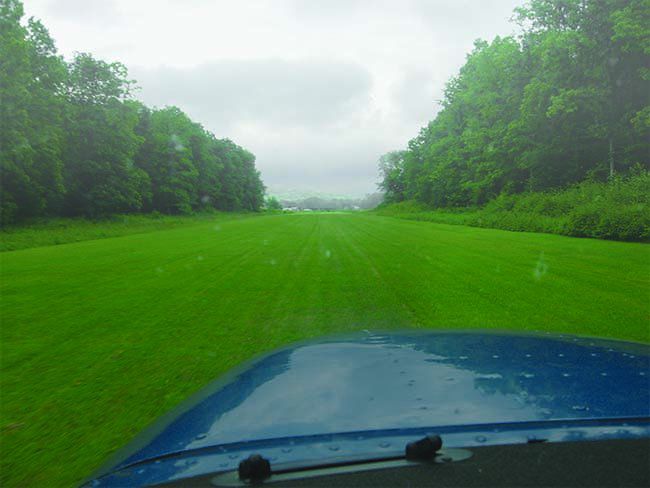 Assuming you have a plan for getting up and out even if there are low obstacles, the question is: What do you need to launch? You need a clearance to enter controlled airspace in less than visual conditions for that airspace. Ideally, you can call ATC and get that clearance on the ground. If not, you can hopefully call Flight Service and get them to fetch your clearance. You’ll hear the difference in the clearance. ATC will say, “Comanche Eight Seven Papa is cleared to …” while Flight Service will say, “ATC clears Comanche Eight Seven Papa to …”

Sometimes you’ll contact ATC or Flight Service for your clearance and get a question like, “Can you maintain your own terrain and obstacle clearance until reaching 2000 feet?” This is usually not an airspace issue but rather a minimum vectoring altitude (MVA) issue. ATC can’t get you on a vector until you get legally high enough to do it. If you regularly depart an airport where you get asked this question, just volunteer that you can maintain your own terrain clearance when you initially ask for the clearance.

Sometimes you’ll hear, “… upon reaching controlled airspace, fly heading 300 …” Again, it behooves you to know where controlled airspace begins. Until then, you decide where to go and how to get there. Even if you just get a clearance with a heading to fly with no “upon reaching,” you’re still the one who has to ensure you won’t crash into anything after you start flying the heading. The departure procedure trumps ATC’s heading. Just let them know, or have Flight Service pass along, that you’ll be flying the ODP to a specific altitude before turning on course.

Does that mean that, until you reach controlled airspace, you’re really operating without a clearance? Yes, it does. In fact, in Class G airspace you can depart in IMC conditions and even fly to a destination airport in Class G airspace without an IFR clearance as long as you never enter any other type of airspace. Legal, maybe, but not smart. But it is feasible and reasonably safe to depart in IMC conditions and pick up your clearance while airborne in the rare areas of the country where Class G reaches above 1200 feet AGL. —J.S.