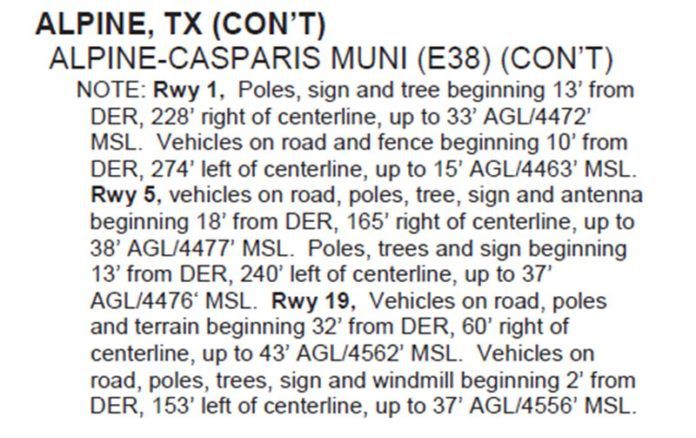 There are some things that you never expect to see together, and they surprise you when used in the same context: West Texas referred to as “alpine,” Donald Trump’s name beside “front runner,” and hashtags on approach charts, I can’t explain that second one, but the first and last make sense when digging into the RNAV (GPS) Rwy 19 approach at E38, a.k.a. Alpine, Texas.

Not an Everyday Approach

Let’s start with the alpine bit: While the hills around Alpine out in West Texas wouldn’t inspire Julie Andrews to song, they do put the airport at just over 4500 feet MSL, and peaks within 15 miles of the field cross 6500 feet. In addition, the approach chart MSA circle—You do brief that part, too, right?—is uniform with 9100 feet all around. All this should be a good reminder not to make assumptions about the terrain below those clouds.

Don’t make assumptions about the runways, either. A quick look at the airport diagram shows Runways 23 and 19 both slope uphill. This could catch you with a surprise if you circled for the reverse and found yourself floating downhill in the landing, descending but never quite reaching the pavement. True airspeed at 4500 would be about nine percent higher than indicated, which would roughly equate to an 18-percent increase in landing distance versus sea level on a level runway. It’s something to keep in mind.

The greater oddity, however, are the # and * in the notes and minimums sections. These denote a matching game where you have to correlate the notes with the appropriate one of the five lines of approach minimums. The # is for the plain ol’ LNAV approach, which has two minimums based on your missed-approach climb capability. To descend to 4880, you need a climb rate of 425 feet per nautical mile to 6400. That’s 640 fpm at 90 knots groundspeed, so for most light singles, you’d need at least 700 fpm for this climb. While that’s not impossible, add a little density altitude to the airport elevation—it is West Texas, after all—and you could get a close look at just why the climb rate is required.

If that’s a bit too much for your risk tolerance, you can choose the version that only lets you descend to a 5160-foot MDA. From there, you’re safe with the standard 200 feet-per-mile climb rate on the missed approach segment. It’s a funny twist of the mathematical angles that makes going 300 feet lower require a steeper climb for over 1500 feet on the way out, but that’s the way it works out for the TERPS calculations.

The single * is for the LP approach. Here’s a quick review for the non-WAAS equipped: LP approaches are to GPS-derived precision LPV approaches as localizer-only approaches are to ILS approaches. LP (Localizer Precision) requires WAAS, but there’s no vertical guidance. This happens when obstacles prevent said guidance within the requirements of TERPS. However, the tighter lateral tolerances of WAAS still allow for a lower approach minimum. Here again, how low you go is a matter of how steeply you can climb. Getting 200 feet of extra descent on the approach requires double the standard climb gradient on the missed. Take your pick.

You know there are obstacles because there’s no LPV. This is further confirmed by the lack of a VDP (saying the 20:1 slope isn’t clear) and shaded “stipple” (34:1 isn’t even clear) from the MDA to the runway in the profile view. A quick look at the A/FD tells the tale. Poles, trees and even a windmill are noted—some only 150 feet laterally, just past the end of the runway.

Reading further through the notes, you’ll see the * reappear when you must use the Marfa Airport altimeter setting (which is about 20 miles west). There’s even a ** here—which I’m betting is an error. I think that’s supposed to be a # and the switch got missed. My guess is there was potential confusion on * versus ** so the FAA turned ** into #. Either that or someone saw # on Facebook and decided to be hip.

The Jepp chart is also shown so you can see how they handle it with the notes more clearly applying to the minimums.

Hip and Retro are kissing cousins, and you can be Retro at Alpine as well. There’s actually an NDB north of the field and a still-viable (and normal) NDB approach. So if you’re feeling all 90s and still have an ADF in your airplane, go live a bit of the past.

Heck, with Trump, Clinton and Bush as the names in the news, it almost feels like the 90s anyway.

Jeff Van West is too old to be hip and too much a nerd for retro—unless you’re talking Revenge of the Nerds, in which case he’ll put a cassette tape in the deck and crack open a New Coke.