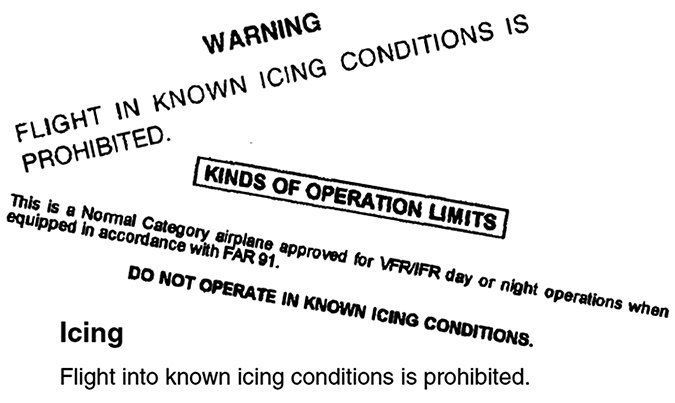 Back in 2006, CFI Robert Miller wrote to the New York FAA Regional Counsel to ask for clarification of the rules applicable to flight into known ice. The response was unfortunate: “flying through clouds at an altitude that is near or below freezing would constitute flight into known icing conditions.” Furthermore, the flight would be “a violation whether the aircraft accretes ice or not.” There you have it. Combine visible moisture and freezing temperatures with the large area covered by an AIRMET ZULU and we’d better stay on the ground in winter, or else! Clearly, this was a response that supported pilots’ worst fears about the FAA.

The result was loud and widespread criticism, with AOPA leading the charge. The FAA Chief Counsel not only disavowed the contents of the Miller Letter, but took the rare step of officially and publicly floating a proposed revision before signing off on it! The result was the 2009 Bell Letter. You can pick up a copy of the letter from the FAA Chief Counsel website. It is worth reading but, to summarize, it did nothing to change the rules or enforcement policy as it had existed for more than 40 years.

There are rules about flight into known or forecast icing conditions for Part 135 and 121 operators, but there is nothing in Volume 14 of the Code of Federal Regulations (commonly called the Federal Aviation Regulations) specifically prohibiting Part 91 flight into known icing. Instead, we look to 91.9(a). This prohibits us from operating an aircraft contrary to its published operating limitations. Add a dose of careless and reckless conduct from 91.13, and you have a better picture of the regulatory background.

A common refrain in known-ice discussions is, “known ice is observed ice.” As the argument goes, unless you see it on your wings or it is the subject of a PIREP from a nearby aircraft it’s simply not “known.” This obviously is technically correct, but it misses the point.

There are a small number of aircraft whose limitations are stated in terms of “known ice.” But for the vast bulk of our fleet, the prohibition in our flight manuals and aircraft Type Certificate Data Sheets is against “flight into known icing conditions.” Not “known ice,” but “known conditions” that can produce airframe icing. And therein lies the rub.

Known-icing conditions is the standard the FAA and NTSB have consistently used for decades when prosecuting and adjudicating known-ice violations. In 1974, a pilot defended a certificate action by arguing it was wrong to equate “forecast” icing with “known” icing. The NTSB disagreed, unwilling to limit the prohibition in a way that would permit a pilot to fly into an area for which substantial icing had been forecast but did not yet have a pilot icing report. “Known,” wrote the NTSB, refers to both reported and forecast data. FAA v. Bowen, EA-603 (NTSB 1974).

Restating the same general principles, 31 years later, the NTSB said, “Pilots are required to obtain all information pertinent to their flight—that is, be well prepared—and make reasoned decisions based on that information.” FAA v. Curtis, EA-5154 (NTSB 2005).

Fortunately, the application of the rule has historically been practical rather than legalistic. I have not seen a reported enforcement case in which a pilot was violated who did not in fact encounter substantial icing and create a problem. In Curtis, an instructional flight, the accident airplane had received local icing PIREPS and had picked up ice on the previous approach. Instead of discontinuing the session, the CFI decided to try again. The aircraft ran off the runway when the pilot lost control due to the ice accumulation.

In FAA v. Boger, EA-4525 (NTSB 1997), the pilot crashed after encountering the severe ice as forecast in a SIGMET that was confirmed in actual icing reports. Two passengers were injured, and the aircraft destroyed.

As the 2009 Bell Letter puts it, despite language that might allow for it, pilots have not been violated based on some vague forecasts about temperatures and moisture but had “very specific information” to alert them to “a substantial danger of severe icing.” Those pilots were violated because the aircraft experienced heavy ice formation after the pilots “chose to continue their flights without implementing an icing exit strategy or an alternative course of action.”

Some argue that we should never alert ATC when we pick up ice, lest the FAA reach out and smite us. To the contrary, as the FAA’s 2015 AC 91-74B guidance, Pilot Guide: Flight in Icing Conditions tells us, a pilot faced with an inadvertent icing encounter should “take appropriate action to exit the conditions immediately, coordinating with ATC as necessary, and declaring an emergency” if you don’t get what you need. Icing encounters tend to get worse, not better, by inaction, and strategies that exclude ATC coordination often end up with a pilot deviation.

Picking up some ice is not an automatic violation. The FAA will look at the “totality of the circumstances.” They’ll check pre-flight forecasts and decisions, to be sure, but I would expect the actions the pilot takes as the flight progresses, particularly when faced with the collection of ice, to weigh far more heavily. Very little in the law is subject to guarantees, but I’ll go out on a limb to say the pilot who takes normal self-preservation steps, creates an icing exit strategy and seeks ATC assistance to implement it faces far less enforcement (and personal) risk than one who continues in silence into a real emergency.

Mark Kolber is an aviation lawyer and CFII who believes the best icing is the frost on a chilled glass of beer after a flight.