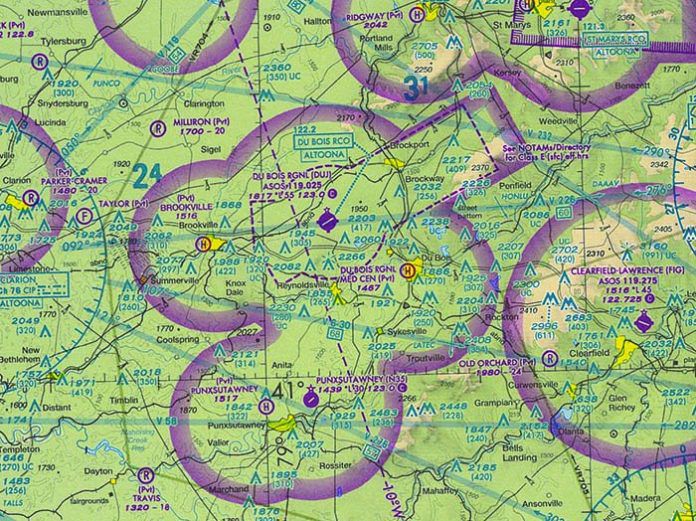 As instrument pilots on IFR clearances, the types and differences of the airspace we fly in don’t seem to matter much. But it turns out that there are some nuances that do matter and can cause hassle, hazard or even a certificate action if we ignore them.

Unlike under VFR where it’s the airspace of higher control (Classes A through D) that are the issue, it’s classes E and G that can cause problems under IFR. These two airspaces are complex in definition and may exist only part-time. Both of those factors may matter at the beginning or end of your IFR flight.

Just as a quick review, here’s that higher-control airspace in alphabetical order. From 18,000 feet MSL up to FL600 it’s Class A airspace and you must have an IFR clearance. Class B airspace is centered around major commercial airports: It’s that “upside-down wedding cake” design that reaches from the surface to around 10,000 feet AGL in most cases. Class C airspace is a smaller, two-tier cake that also begins at the surface and usually tops at 4000 feet AGL or at the Class B airspace that overlies it. Class C is similar to Class B in that it centers on a (slightly less) busy commercial airport and isn’t always symmetrical in shape. Class D is the Traffic Area around a controlled/towered airport and typically tops at 2500 feet AGL.

As an odd side note, all Class B and Class C primary airports also have a Class D airspace. Usually that is inside the B or C airspace but it sometimes sticks out: Fly VFR down lower Puget Sound in Washington State and you can fly through Seattle-Tacoma International Class D while flying below the same airport’s Class B.

A lawyer would have a great time with a contract that unspecific. But it works because most of the airspace pilots find themselves in (in the 48 states of the CONUS, anyway) is Class E. There are seven, count ’em, seven different types of Class E airspace. But we’re concerned with the first three. Once again, directly out of the AIM:

2. Extension to a surface area. There are Class E airspace areas that serve as extensions to Class B, Class C, and Class D surface areas designated for an airport. Such airspace provides controlled airspace to contain standard instrument approach procedures without imposing a communications requirement on pilots operating under VFR.

3. Airspace used for transition. There are Class E airspace areas beginning at either 700 or 1200 feet AGL used to transition to/from the terminal or en route environment.”

That leaves Class G. Once again, the AIM offers an excluding definition: “Class G airspace (uncontrolled) is that portion of airspace that has not been designated as Class A, Class B, Class C, Class D, or Class E airspace.”

From the IFR pilot’s perspective, Class G matters because it can be the transition airspace between the runway at an uncontrolled airport and the controlled airspace above it. In low weather, you might be legally sharing the airspace just above and around the airport with another aircraft. ATC only is chartered with separation of IFR aircraft. They provide traffic information services to call out VFR aircraft as workload and conditions allow, but you’re always responsible for avoiding other aircraft visually.

Class G VFR weather minimums are (mostly) one mile visibility and clear of clouds, so you could easily reach the bottom of Class E at 700 feet on one-mile final with the threshold in sight, and—surprise—there’s an aircraft legally in the pattern on base ready to t-bone you. If you ever thought position reports on final approach to an uncontrolled airport only mattered when you were VFR, think again.

We like to believe we have uncontrolled airports to ourselves in marginal weather. But that’s only relative to other IFR traffic. At night, the weather minimums are similar to most Class E airspace (three miles visibility, 500 feet under, 1000 over, and 2000 feet horizontally from clouds) but the principle is the same.

So Which Is It?

Moving from principle to practicality is another thing. Not only do many VFR pilots bend or flagrantly disregard VFR weather minimums, many don’t check to see what kind of airspace is at the surface for their airport. Many don’t even know how—but then, neither do many instrument pilots.

Typically, if the airport has an instrument approach, then the airport will be surrounded by a magenta faded area indicating that the base of Class E is 700 feet. This lower ceiling of Class G airspace may be circular or may have extensions to protect the instrument approach path. In some cases, the Class E airspace over the airport and possibly with approach extensions extends all the way to the surface. This airspace is easily identified by a magenta dashed line that outlines the Class E surface area.

There is a legality trap for both VFR and IFR pilots here. If the airport is Class E to the surface and its ASOS is reporting less than VFR (less than 1000-foot ceilings or three miles visibility), then that’s controlled airspace that requires an IFR clearance or special VFR clearance. It doesn’t matter if you can take off and maintain cloud clearances. To legally take off, you’ll need to get your clearance on the ground rather than pick it up in the air.

Who’ll notice, you say? Well, the controller whom you have to contact to get your clearance will, as he’ll know the weather for the airport you just left—you had filed with that airport as your departure—and he’ll wonder how you got out VFR from an IFR field. But if it’s Class G at the surface, then getting airborne and picking up the clearance to continue IFR is just fine.

It gets more nuanced with a part-time tower. If there is weather reporting, the Class D airspace around a towered airport usually changes into Class E when the tower isn’t in operation. But if there is no weather reporting, then it will change to Class G. Consult the A/FD for specific airport information. Once you know which airspace it is when the tower is closed, you can plan accordingly for what to do when landing or departing.

Playing Safe with Others

The point of all this is that it’s easy to feel protected in the cozy blanket of air traffic control, but control isn’t as black and white as the regs might indicate. Class E airspace is a bit more of a continuum: When it’s Class E near the surface and around an airport, it’s far more likely that someone will be treating it more like Class G. And you may be surprised how your TERPS-protected instrument approach leads you right into traffic-unprotected, uncontrolled airspace in the last moments of your approach.

As we’ve said earlier, don’t assume that all the other pilots are as diligent about maintaining legal cloud clearances as you are. It pays to be just a little paranoid when you’re flying at the edge of, or beyond, ATC control.

Joe Shelton is a fan of IFR around uncontrolled airspace and the safety officer for Angel Flight West.