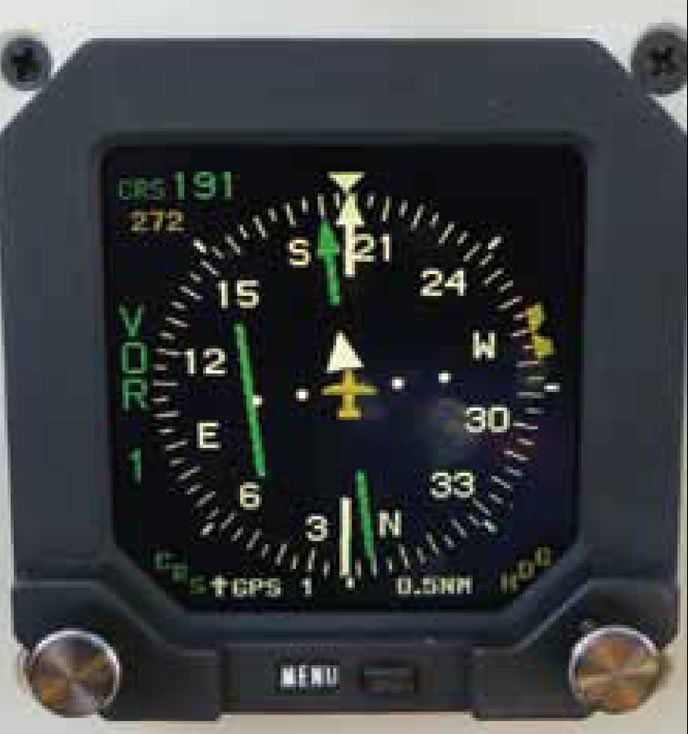 While the HSI was a game-changer for the instrument pilot by raising the bar on situational awareness, it introduced more avionics complexity, especially when connected to multiple nav sources. In failure mode, and for the pilot who doesn’t know how to operate it, the instrument can be a killer.

When I was a new avionics technician, Narco’s DGO-series HSI system was the ground breaker. But, not all pilots fully understood what an HSI would do, and fewer yet understood how they worked. That’s somewhat true even today.

While HSI stands for “horizontal situational indicator,” it doesn’t display any horizon data. Obvious? You’d be surprised. As a new technician, I introduced a customer to the HSI we’d just installed in his airplane. He looked perplexed and asked why his traditional attitude gyro was still in the panel and not self-contained in the HSI, which was supposed to display horizon data. That took a while.

HSI technology has come a long way, advancing from mechanical to digital displays and gyros, but the basic HSI display is relatively unchanged. The indicator overlays desired course data on heading data to help simplify your scan. It also includes a glideslope pointer.

Marketing literature said that an HSI simplifies course orientation, intercepting and tracking and, according to BendixKing in its KCS55A pilot’s guide, “could generally result in better piloting technique and skill.” Bold statement, eh?

While there are model variations, nearly all HSIs share the same basic layout of displayed data. We’ll use the venerable BendixKing KI525A shown here.

Simply put, think of an HSI as a directional gyro with a course deviation indicator mounted on the compass card. It displays left/right/vertical course and steering guidance, to/from and heading-valid flags, a compass card and a heading bug for interacting with an autopilot.

For that left/right steering guidance, all HSIs have a selectable course pointer arrow where the head indicates the desired course, while the tail of the arrow is the reciprocal. The center of that arrow moves linearly to either side to act as the course deviation indicator. The pointer is manually set with a course-select knob, but electronic models generally can autoslew the course pointer to the desired course or active waypoint as commanded by a navigator.

Since the entire VOR/LOC/GPS display rotates with the compass card, the angular relationship between the deviation bar and the symbolic aircraft fixed in the center of the instrument provides a pictorial display of the aircraft’s position with respect to the selected course. A familiar triangular to/from indicator references the OBS setting in relation to the desired course.

Most HSIs have vertical deviation indicator pointers (VDIs) on one or both edges of the display that drop into view when a valid glideslope signal is received. They read conventionally from there to show if the aircraft is too high, too low or on the glidepath.

Last, HSIs have both compass and navigation warning flags to warn of faulty heading input data and invalid navigational signals. In some cases a flag will automatically disconnect the autopilot.

Some slaved HSI systems have a slaving meter, indicating the difference between the displayed heading and the remote magnetic sensor. This slaving accessory can be a huge tool when troubleshooting a faulty system. Pay close attention to it, noting large slaving-meter deflections or indicator discrepancies.

Whether it’s a well-worn vintage system in the flight school’s Arrow or the electronic HSI display in an all-glass Cirrus, it’s imperative to understand where the displayed data is coming from, what source is driving the gyros and what conditions can compromise its accuracy—or take it down entirely.

HSIs can be driven by iron gyros or by electronic (digital) gyros. If iron gyros, those gyros can be spun by electricity or by vacuum. The displays can be electronic (EHSIs) or mechanical. Finally, the HSI compass card can be slaved to a magnetic sensor or non-slaved like your basic heading indicator.

Non-slaved HSIs will have a gyro caging knob and shaft for manually setting the heading. Simply push in on the shaft and turn the compass card as you would a directional gyro. In a slaved system, the card automatically rotates through drive gears and or belts, based on input from a heading compensator and other slaving circuitry.

A common basic HSI is the Century NSD360A. This entry-level, self-contained instrument is a non-slaved—you need to manually adjust for periodic gyro precession just as you would a plain-vanilla DG—vacuum-driven model that’s found in various versions that all share the same basic operating logic.

The double-edged sword with these is that with low entry cost comes limited time between overhauls, plus a finicky design of belts, gears and meter movements. Like any vacuum-driven instrument, the NSD360A’s gyro failure can be gradual or occur without warning. You might find that it suffers from severe precession or the gyro might fail entirely. It might also suffer from mechanical failure—perhaps a belt, gear or meter movement breaks—leaving the heading display functional, but navigation data failed.

There’s a slaved version of the NSD360A, driven by a remotely-mounted magnetic-heading flux sensor and a slaving amplifier. These components eliminate the need to manually correct for gyro precession, but introduce another failure mode, as discussed in the sidebar.

Once the flagship HSI system, BendixKing’s KCS55A remote compass system with HSI was standard or optional in a wide variety of OEM applications and often came as an integral part of the BendixKing KAP or KFC-series autopilot/flight control systems.

The KCS55A is a complete, all-electric slaved-compass system with electric HSI. It includes a KMT112 magnetic slaving transmitter (known as a flux valve), the KA51-series slaving control and compensator unit, the KG102A remote heading gyro, and the KI525A HSI, which BendixKing called the Pictorial Navigation Indicator, or PNI.

Like any HSI, it combines the display functions of the standard directional gyro with VOR/LOC/GS course deviation indication in one display.

Other models include the electrically-driven and aerobatic-capable Collins PN101, S-TEC’s ST-180, the all-electric Century NSD1000, and a version of Century’s NSD360A made for ARC/Sperry for some Cessna OEM applications.

These electronic HSIs (EHSI) like the Sandel SN3308 and the Bendix/King KI825 were common retrofits for mechanical HSIs. They provided all the HSI functionality, and typically added RMI and some MFD capability, displaying route fixes and even limited weather and traffic.

Being just a display, an EHSI relies on a remote heading gyro and magnetic slaving system—typically the same ones that fed the mechanical HSI. Moreover, EHSI systems have many of the same vulnerabilities as analog systems—perhaps more.

The BendixKing KG102A electric remote gyro (part of the KCS55A system) was the dominant choice for these installations for years, but alternatives did eventually become available and even later included solid-state gyros (AHRS). As in an analog installation, failure modes of mechanical gyros include frozen heading, erroneous heading or significant precession. In some cases, the EHSI display will X-out the heading data when the heading feed becomes invalid, but the typical installation did not provide a backup.

Third-generation, full-up EFIS systems, such as the Aspen Avionics EFD1000 Pro PFD and MFD, and Garmin G500/600 are fully-integrated all-electronic systems. These include a PFD showing all the basic flight instruments including the EHSI (with enhancements) and optional (Aspen) or included (Garmin) multi-function displays for ancillary data and moving maps.

It’s not uncommon for PFD-embedded EHSIs to overlay traffic targets, weather graphics, a moving map, synthetic vision and other situational data on or around the HSI display. The PFD EHSIs also make it possible to display course information from multiple sources, without the need for external nav-source switching.

For instance, if you have dual GPS navigators, you can select which GPS course data to display as primary, secondary or as a bearing pointer. This simplifies both the installation and pilot workload.

Contrast this with first-generation mechanical and analog HSIs that have but one, fixed display of nav data. The installation requires external switching relays, a nav-source switch, and mode annunciation to allow the pilot to select one of two nav sources to display on the HSI.

Most of these EHSIs display your current ground track. For example, Avidyne’s Entegra EHSI shows a dashed gray line from the aircraft’s present position symbol to a triangle along the outer edge of the compass rose. When properly used, these take the guesswork out of wind correction.

Advanced and reliable as AHRS systems are, it’s still important to know what remote components are responsible for their displayed heading source.

For instance, the EHSI within the Aspen PFD relies on a remote sensor module (RSM) for heading resolution. Resembling a GPS antenna, the RSM is generally mounted on the exterior of the fuselage. It contains a 3-D magnetic flux sensor, a backup GPS receiver with antenna, and a temperature sensor.

Losing out to PFD systems—notably Aspen’s Evolution and Garmin’s G500/600-series—retrofits with second-generation EHSI systems have flat-lined. Buyers are recognizing the benefits and reliability of AHRS-driven flight instruments, versus the increasingly high costs of maintaining iron gyro-driven HSIs.

Last, it’s worth spending some time reading the pilot’s guide for whatever HSI system you fly. An HSI is a wonderful tool for instrument flying, but can be a source of confusion for pilots not versed in its operation and failure modes, especially with an autopilot.

Larry Anglisano is the editor of sister publication Aviation Consumer and has 25 years of experience as an avionics technician.