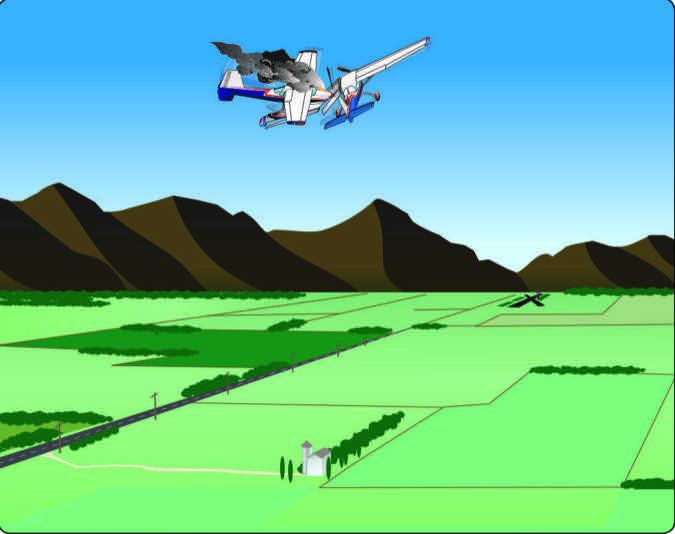 Leaving a busy Class B, I checked-in with Departure leveling 4000 feet and received, “climb and maintain 8000. VFR traffic, a helicopter, twelve o-clock at 5500, has you in sight.” I thought, “Whiskey, tango, foxtrot: hello midair.”

Regulations prevent collisions through right-of-way rules. These codified decencies apply to the road, sea and air. For aviation, 14 CFR 91.113 warns that “regardless of whether an operation is conducted under instrument flight rules or visual flight rules, vigilance shall be maintained by each person operating an aircraft so as to see and avoid other aircraft.” Sage advice, that, especially with our butts in the hot seat.

We’re usually not rogues in the air. We operate in concert with air traffic control. Structural frameworks exist to manage the risk of midair collision, particularly for IFR flight. They usually work…

In 2015 two high-profile midair collisions occurred with at least one aircraft talking with ATC. A search of the near midair collision (NMAC) database yields 819 events involving IFR aircraft since 1992 and 166 events in the last decade. Of the NMACs involving instrument flights, 16 percent are classified as critical, defined as less than 100-foot separation.

Airspace is a risk-based system. The higher the risk, the greater control the FAA exerts to minimize that risk. In controlled airspace, all IFR traffic should receive standard separation from other IFR flights. ATC does a great job at this. The rub occurs in separating IFR and VFR flights. One way the FAA mitigates this risk is through airspace requirements.

The extremes are easy to understand. In uncontrolled Class G airspace, no traffic separation is provided, even under IFR. A clearance isn’t required to operate IFR; only appropriate pilot, equipment and terrain-clearance requirements exist. You just have no idea who else might be poking around in the clouds with you.

If Class G is the Wild West, Class A is an eastern army precision marching through Red Square. Every flight is IFR and instrument separation is maintained no matter what—no cutting corners on separation even if it’s clear and a million with traffic in sight. Separation requirements are murkier in other airspace.

In the slightly-less-regimented Class B, ike Class A, everyone operates with an ATC clearance and, according to the AIM, VFR pilots are provided separation from other aircraft. The amount of separation is either 500 feet vertically, target resolution (targets on radar can’t touch) or 1.5 miles (depending on type of aircraft) horizontally, or visual separation.

Tower-applied separation is limited to aircraft around the airport and in radio contact with the tower. It often occurs on departure. For example, leaving Charlotte in VMC, tower controllers will depart multiple aircraft without the requisite IFR separation. Instead Tower will maintain visual separation between the aircraft. This is why it’s important to stay on a tower frequency until instructed to contact departure.

Traffic-separation standards in Class B airspace allow for reduced cloud clearance because there’s no worrying about traffic popping out of a cloud and having to take evasive maneuvers.

The AIM warns that separation services provided in Class B should not “be interpreted as relieving pilots of their responsibilities to see and avoid other traffic.” This boilerplate language is so common it probably wore out the insert keys on the FAA lawyers’ computers.

Interestingly, the AIM continues discussing Class B, suggesting a revised clearance should be obtained if “compliance with an assigned route, heading and/or altitude is likely to compromise pilot responsibility with respect to terrain and obstruction clearance, vortex exposure, and weather minimum.” It’s odd that traffic conflicts aren’t mentioned…

Class C separation is similar to B: visual, 500 feet vertical, or target resolution. Interestingly, wake turbulence separation is also provided, something missing from the Class B services. Separation services can be suspended for VFR traffic if approach radar goes down, or the pilot can cancel the service…for some reason.

Since VFR separation services can be suspended and traffic can just get clearance for airspace entry directly from tower, Class C airspace has greater VFR cloud clearance requirements than Class B.

Class D and E get no separation of VFR aircraft. Here, the only help for pilots are traffic advisories and safety alerts. “Traffic advisories” is the official term for flight following. Provided when workload permits, this offers information for pilots about traffic displayed on a controller’s scope. Aircraft conflict safety alerts, a mandatory service, are issued if a controller observes another aircraft that places it in an unsafe proximity. When feasible, the controller will offer the pilot an alternative course of action.

Transponders are a technology aid in reducing collision risk. As stated in the AIM, operating with a transponder “On” will provide greater protection from IFR and VFR traffic, “even [for] VFR pilots who are not in contact with ATC.” Mode C veils, airspace above Class C and 10,000 feet allows ATC to better see traffic. An added benefit is that transponder-based anti-collision systems are more useful.

Let’s say Cessna 123 called a flock of F-16s in sight. The Cessna doesn’t know where the F-16s will zig or zag and can’t maneuver enough to maintain a safe distance if they zig in the Cessna’s direction. Think this is unrealistic? A similar event occurred in 2015 and highlights how pilot acceptance of visual separation creates an expectation bias among controllers.

An F-16 on an IFR flight being vectored for an approach collided with a Cessna 150, killing both occupants in the Cessna and causing the fighter pilot to eject. The controller issued a traffic alert to the F-16—even initiating vectors to avoid the traffic—but too late to avoid a collision due to a 300-knot closure.

The controller delayed issuing separation vectors due to an expectation that the fighter pilot would acquire the traffic and accept visual separation. As the NTSB wrote:

Even if the fighter pilot did get the Cessna in sight, did he really have the mental resources to maintain separation while on approach? Probably not.

Another problem with visual separation is identifying the wrong aircraft. This caused a midair at Brown Field in San Diego, when the controller, “mistakenly identifying the Cessna to the right of Eagle 1 as N6ZP, [and] the local controller instructed the N6ZP pilot to make a right 360 to rejoin the downwind when, in fact, N1285U was the airplane to the right of Eagle 1.” (NTSB WPR15MA243A Synopsis) It’s easy to identify the wrong aircraft at busy airports; especially with parallel runways. Night adds to the hazard.

On a visual approach with proceeding traffic in sight, the pilot must maintain adequate spacing. Even then, a controller can issue a safety alert. But, the distance at which a safety alert is issued might not account for the Cessna possibly being tumbled in the wake of a super.

The regulations state that “regardless of whether an operation is conducted under instrument flight rules or visual flight rules, vigilance shall be maintained by each person operating an aircraft so as to see and avoid other aircraft.”

The key word is vigilance. It’s commonly defined as the action or state of keeping careful watch for possible danger and difficulties. Pilots are vigilant about many things. Often that requires balancing competing demands for attention. A pilot can’t spend all his time looking for traffic. That would mean neglecting the aircraft, navigation and communication.

Interestingly, the vigilance required by see and avoid isn’t tempered by reasonableness. A pilot must juggle many spinning plates, yet FAA lawyers or the NTSB, in case law, never acknowledge this struggle. The NTSB discusses the “duty” of see and avoid and the nebulous requirement that the level of vigilance change to meet conditions. The board wrote in 1994: “The general ‘see and avoid’ obligation on all pilots requires more vigilance from both aircraft.” (NTSB Order No. EA-4169)

If right-of-way rules aren’t properly applied resulting in a collision, violations of 91.111, operating so close to another aircraft as to create a collision hazard, and 91.13, operating an aircraft in a careless and reckless manner, will be heaped on the enforcement action.

Areas ripe for NMACs involving IFR aircraft are those that funnel IFR and VFR aircraft into limited space. Many of these surround large metropolitan airports where airspace and terrain channel traffic. For example, SUNOL intersection in the San Francisco Bay Area is a five-way IFR intersection that serves arrivals to multiple airports and is between two VFR reporting points. Terrain limits the lowest usable altitude and Class B starts at 8000 feet.

The sky is big, but the chance of two aircraft being in the same spot is growing. Before GPS, even the best long-range navigation was imprecise. I remember the pilots of a TWA L-1011 bragging that the drift on their IRS was only seven miles on a transcon flight. VOR error can approach six degrees. This slop actually reduced the chances of collisions, with few aircraft precisely on a route center line.

GPS is a game changer. With accuracy tighter than the wingspan of most aircraft, everyone on a route is exactly on the center line.

An emerging challenge associated with GPS and improved navigational information is highlighted by Safety Alert for Operators (SAFO) 17001. VFR pilots historically gave airspace a wide birth. Not anymore. As the SAFO states:

As more aircraft skirt airspace, NMAC risk when exiting the airspace increases—instrument procedure or not.

In a Perfect World

Back to me and the helicopter. The helicopter reported us in sight and was maintaining visual separation. But how can an aircraft with a max speed of 119 knots maintain separation from one doing 250? Additionally, their sense of adequate distance might be a lot different than mine.

The NTSB (the accident investigation branch this time) took the FAA and lawyers to task, writing:

The “see-and-avoid” concept has long been the foundation of midair collision prevention. However, the inherent limitations of this concept, including human limitations, environmental conditions, aircraft blind spots, and operational distractions, leave even the most diligent pilot vulnerable to the threat of a midair collision with an unseen aircraft. (Safety Alerts: Preventing Midair Collisions, 2015)

The Board also noted, “The primary purpose of the ATC system is, in part, to prevent a collision between aircraft operating in the system and to provide a safe, orderly, and expeditious flow of traffic.”

Preventing NMACs involving IFR and VFR traffic is going to take a rewriting of the rules. Pilot-applied visual separations should be a three-party agreement—all involved must agree. At the very least, the flight maintaining visual separation must have the performance to evade the other traffic, and ATC must inform them of the other traffic’s path.

Other options for reducing NMAC include technology to improve traffic awareness (See sidebar.) and minimizing time in less-positively controlled airspace. This means staying in class A, B and C airspace as much as possible and above 10,000 feet—not an option for most piston-GA aircraft.

Jordan Miller is a professional pilot, who’s flown full-time for over fifteen years with an encouragingly small number of conflicts.