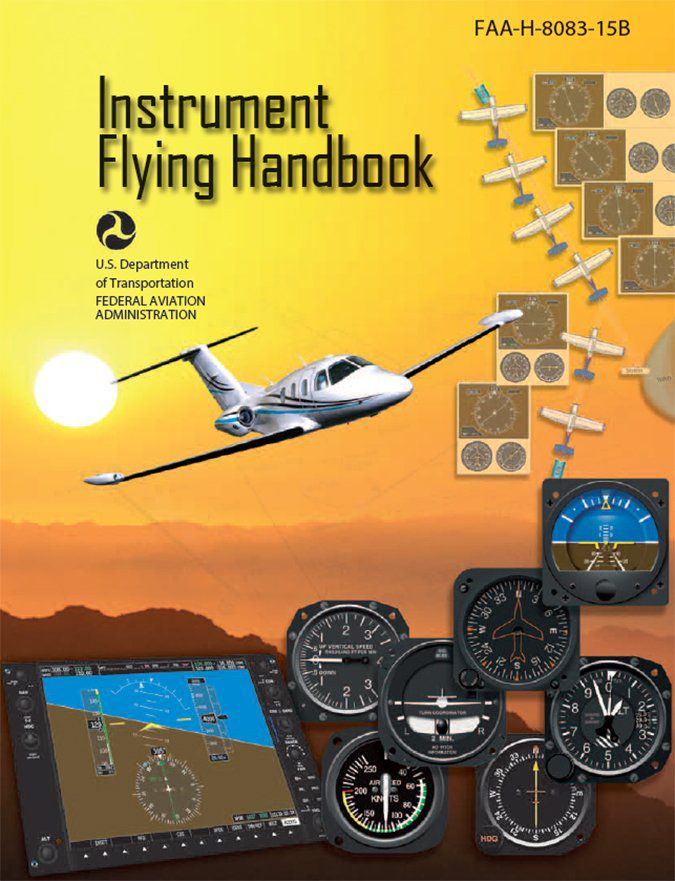 Most of us have a shelf of books chronicling our flying. There are the books we used to learn to fly, obtain instrument and type ratings, and bundles of magazines. In there is probably a dog-eared copy of the Airplane Flying Handbook, and perhaps a few others in the FAA’s long-running series of manuals. If you haven’t used them, or if it has been a while, it’s worth and a fresh look—especially now that they’re available online directly from the FAA.

While mainly used for training, the IFH is a good resource for any experience level. Its abundance of facts and tips are handy for everyday operations, such as holding and flying precision approaches.

Chapter 9, Navigation Systems, is among the most useful for technical information. This could have been broken down into two or even three chapters to separate radio and GPS functions, but it’s fairly well organized.

This edition still includes a detailed tutorial of the NDB (“non-directional beacon” if you don’t recall), but surely that will be gone soon as NDBs are decommissioned. You can also skip any references to LORAN, which was turned off in 2010.

The weakest chapter of the IFH is Emergency Operations. It gives short shrift to a topic that should be covered in depth. I’m always showing my instrument students how thin this chapter is—a mere 13 pages, versus 48 on navigation—and that there’s so much more to know. Still, it covers the basics and makes a good launching point for more detailed discussions that are situation and aircraft specific.

Not to be confused with the Instrument Flying Handbook, with which it has very little overlap, the 2015 Instrument Procedures Handbook brings all phases of an IFR flight together. The IPH can get rather dry and is far from perfect in its utility, but still it’s right up there with the FAR/AIM as a go-to reference.

The IPH’s biggest plus is that it offers good-to-know details not found in a typical training manual. For example, the chapter on enroute operations outlines the sector structure of a Center facility, from low altitude to ultra-high altitudes (FL350 and up).

Chapter 4, Approaches, includes much more than the parts of an IAP. It contains some background not discussed in other manuals, such as how many arrivals per hour an ILS can handle for a given runway (29), and where the requirements for CAT II and III approaches are (OpSpecs Part C).

You’ll also find some essential reminders on CFIT avoidance, noting that terrain clearance poses a higher risk in non-radar environments. To that end, the En Route chapter reviews altitude considerations and common acronyms as well as some of the more obscure. (Minimum Turning Altitude anyone?)

Like the IFH, this book doesn’t do justice to emergencies, placing all six pages in the appendix. Again, it’s the tip of the iceberg, but at least it covers the most common topics such as icing.

This book, last published in 2009, is probably best used to train for transition into glass or even just to use an RNAV navigator.

By necessity it’s general in nature, so it wouldn’t be enough for those exploring the depths of their new systems. The manufacturers’ manuals and flight supplements are the best sources there.

Still, the handbook is filled with good safety discussions about things like situational awareness, and points out common gotchas for RNAV operations, such as forgetting to double-check the correct navigation mode—radio or RNAV. The illustrations depict common advanced systems, such as the Garmin G1000 and Avidyne Entegra.

Cleanly organized, the book breaks down a typical advanced cockpit into four chapters—instruments, navigation, autopilot, and supplemental information, such as traffic, terrain, weather, and engine management. However, most readers will find some explanations to be a bit obvious or redundant. (“Terrain systems provide information about significant terrain along your route of flight.”)

Most pilots have reviewed at least some sections in the Airplane Flying Handbook on occasion, as it contains chapters on basic fixed-wing airplanes, jets, turboprops and tailwheel airplanes. It’s a solid basic reference. While used mainly for primary instruction, it’s an easy way to prep for a new aircraft rating or make-and-model transition.

The AFH, last updated in 2004, is also great for flight reviews, instruction and commercial maneuvers (lazy eights, steep spirals, and the like). While most career pilots are well versed on operational basics such as taxiing and before takeoff checks, sections such as Chapter 4, Slow Flight, Stalls and Spins, are among the most useful and pertinent in transition training.

Its companion, the Pilot’s Handbook of Aeronautical Knowledge (2008), has the same feel—a mix of the basics, advanced material and specialties. It’s really a catch-all of sorts that includes airframes, engines, weather, airport operations and safety guidance, the latest of which is on runway incursions (Appendix 1).

This version has been updated to explain the major components of electronic instruments and navigation systems while hanging on to traditional fare like Automatic Direction Finders. Still, subjects like aerodynamics don’t change, so updates to this and other timeless topics are mainly in the graphics and more modern references.

The handbook goes beyond commonly discussed safety reminders such as personal external pressures and establishing personal minimums. It’s filled with references to interesting studies and accident scenarios based on NTSB reports.

While some parts are more academic, like how we make decisions under different conditions, there are real-life examples of why these things matter. Experienced pilots and instructors will find useful details in Chapter 6, Single-Pilot Resource Management, with other sections on automation and training.

To put some of this into practice, the three appendices provide worksheets and scenarios on personal minimums, risk assessment and CFIT (developed by the Flight Safety Foundation for professional pilots).

If you’re looking to keep up on the latest sources of technical information or start a new stage of training, the FAA handbooks are worth collecting. They’re freely available in electronic form, and pack a punch without being overly lengthy.

Discussions of FAA reference material must include advisory circulars, which we’ll cover next month.

Where to Get ‘Em

The quickest ways to find FAA handbooks are to search for the title or topic or go to the home page. If you have the title or keywords, type that and “FAA” into a search engine; the official PDF should be near the top of your results.

To browse all the titles takes some mouse work. Start at the FAA’s home page at faa.gov. On the top menu, hover over the unlikely “Regulations and Policies” tab. Here you’ll find many useful links including “Advisory Circulars” and “Airworthiness Directives.” Under “Handbooks and Manuals” dozens of documents are organized under sub-menus for Aircraft, Aviation, and Examiners & Inspectors. Click a title to see full listings. You can view the PDFs, download separate chapters or (in most cases) download entire handbooks.

You can also buy printed copies from commercial sources or directly from the government at https://bookstore.gpo.gov. (This site will require a title search; the Government Printing Office carries thousands of titles).

Elaine Kauh is a CFII in eastern Wisconsin, where the skiplane-seaplane handbook is required reading.