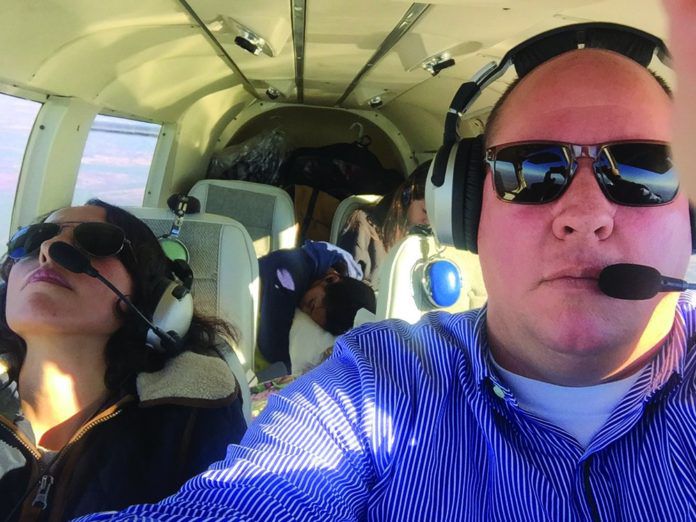 On a recent flight from our home in Tulsa, OK to visit my wife’s family in Monterrey, Mexico, I planned a stop in Austin, TX. My Cherokee Six is no rocket, and we had a 30-knot headwind on this day turning a normally five-hour trip into a 6.5 hour slough. At around 12:30 PM, over Cedar Creek VOR my wife and kids started complaining about how hungry they all were. Checking the weather up ahead, I saw that ceilings across central Texas were higher than expected. So, I called up Center:

Me: “77R would like to change our destination to Llano, KAQO.”

Me: “Good BBQ and cheap fuel.”

After tackling about 5 pounds of tremendous brisket, sausage, and pork, my wife and kids entered a BBQ-induced coma for the remaining three-hour flight, and I got to fly in peace.

San Diego Ground was at his comic best not too long ago. It was busy, but not too busy to have a little fun, it seems. During our taxi out, we heard:

Ground: “SkyWest 1234, there is flow into San Francisco. Let me check when I can release you, but expect to hold in the runup pad.”

SkyWest 1234: “Thanks for the release and we’ll buy that lottery ticket.”

I fly out of KLWM (Lawrence, MA), and often practice near 2B2 (Plum Island). On a nice day, the CTAF is usually jammed with overlapping traffic calls, so it’s often fun listening to it.

One Saturday, I heard two aircraft making position reports into Plymouth, on the other side of Boston. The first one landed, and then the second one reported her base turn, saying, “…This will be a full stop.”

A moment passed and she transmitted again, “If all goes well.”

I recently overheard this exchange between a male airline pilot and a female controller at Indy Center.

Indy Center: “It’s your lucky day. I have tons of them. Where would you like to go?”

Indy Center: “Ooh, sorry. None of them go to Atlanta. But if you’d like to go direct Fort Wayne or Duluth I can get that for you right away.”

Flight 123: “Well, then, how about somewhere warmer, like Cancun?”

Indy Center: “That’ll work. Swing by Indianapolis and pick me up. I’ll have direct Cancun ready by the time you get here.”

More and more web sites insist on password updates to increase security. Increasingly, sites want passwords to include at least one capital letter, one special character, and one numeral. How can I remember these new passwords, short of writing them down? Then it occurred to me, why not a flight plan I frequently file with my iPad, like Kykm/Papps/V497/Ksff. Hackers would never guess something like that. Unless they read this, of course.

We’re running out. Don’t make us use some reruns. Please send us your cleverest (or most embarrassing) moment on the radio—or your favorite fix names or airport names—with a subject of “OTA,” to IFR@BelvoirPubs.com. Be sure to include your full name and location.