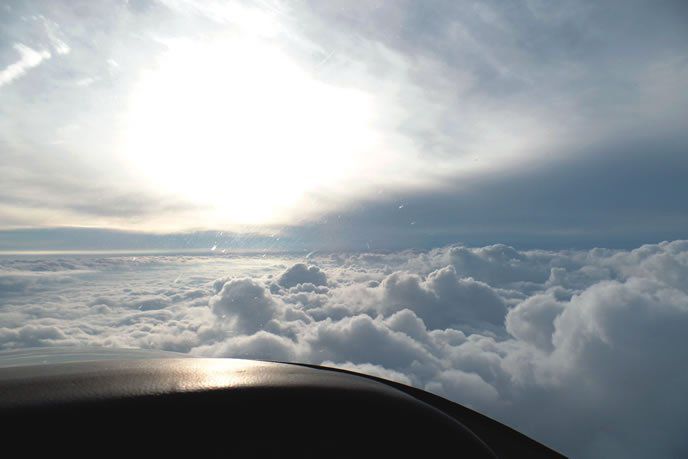 I recently had a beautiful IMC flight on which I relearned how wonderful our capability to operate in the IMC world is. It’s easy to lose that awe for the beauty of our environment and the utility of the machines at our disposal as we move safely through this environment. Such is the stuff of poets. So this is not a story of drama over bad weather, near misses or close calls. It’s a story of the unique advantage and perspective that the few humans who call themselves “pilot” have been able to experience and enjoy.

I decided to spend a day with my daughter in Atlanta. It’s a short trip of only about 150 miles, but the weather can often make it interesting. This day was IMC over most of the southeast.

My route was from Headland, AL to Fulton County, GA. On departure the ceiling was about 900 feet. I picked up my clearance via cell phone: “Cleared as filed…” Takeoff was normal, the engine was happy and about the time I entered the clouds I turned on course, climbing at 850 fpm. I checked in with Departure, was radar identified and cleared to 7000 feet. Passing through about 6200 I advised Departure that this was where the tops were. At 7000, I set cruise power and settled back to enjoy the flight when I was handed over to Atlanta Approach. I even had a nice 10 knot push.

At 9 AM on this Sunday morning, the frequency was quiet. I began setting up for my arrival. I got the ATIS: wind 080 at 07, ceiling 900 broken, visibility 2 miles in mist, using ILS 8. I noted that one of the ILS 8’s IAFs was on the arrival I was flying. Nice. I asked for and got direct to TIINI and my initial descent.

As I descended toward the clouds, I saw a rare and delightful phenomenon—a glory, which is a sundog surrounding the shadow of the aircraft. This is one of those phenomena that can only be seen from the air with an undercast below and clear, sunny skies above. Your aircraft’s shadow has a 360 degree rainbow or halo around it.

I tuned and identified the localizer, and set up the autopilot for the approach. All was well. “George” did a fine job of following the localizer and glideslope while I managed the power, speed and aircraft configuration. I landed, taxied to the FBO, shut down, gave my fuel order, met my daughter and off we went—all in little more than an hour from takeoff to landing.

After a great visit, I headed home in time to land before sunset. I filed for 8000 with just one leg before an enroute VOR and one after. My clearance was the usual radar vectors to the VOR then as filed.

Atlanta Departure warned me, “I’m going to have to box you around for the climb.” Indeed he did. I took off on Runway 8 and after takeoff got a 360 vector. Above 3000 feet, I got a right turn to 090 and at 5000 was turned south to overfly Atlanta. After getting a few miles south, I was finally given direct to the VOR and 8000 feet. The return flight wasn’t quite on top, and there was a little Stormscope activity scattered around my route but nothing of concern.

Approach concurred with all that and gave me alternate missed approach instructions—runway heading to 3000 feet. I was soon cleared direct to DEKKE, the IAF and started down. A few miles from DEKKE I was cleared for the approach. Crossing DEKKE inbound after the turn in hold in lieu of the procedure turn, the LPV approach annunciated on the GPS and showed the glideslope indicator on the PFD. George did his excellent job while I managed flaps and power for the airspeed. I crossed the FAF on altitude at 1700 MSL and captured the glideslope. I began glimpsing the ground at about 550 AGL and fully broke out about 100 feet above DA.

As I drove home, the sun had set, it was a dark night and the temperture-dewpoint spread had gone to zero. Getting on the ground before sundown was the key to getting in to either airport. It had been a really fun IMC day using the full utility of my airplane with absolutely no drama. I had a wonderful sense of awe and fulfillment for the capabilities and accomplishments we so often take for granted.

Bill Castlen is a current Cirrus Standardized Instructor Pilot, FAA Gold Seal Instructor, Five Time Master CFI, and FAASTeam Representative. In case you didn’t notice, he has a passion for flying in IMC.