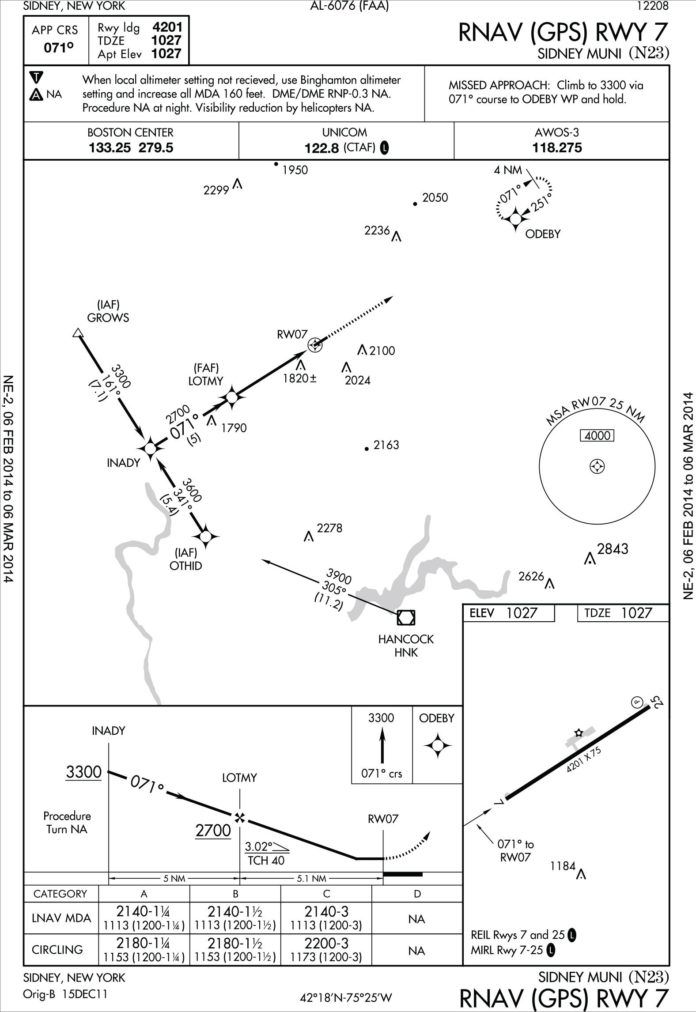 Everyone seems to be on the “constant descent final approach” (CDFA) bandwagon these days, telling us to avoid the trusted and long-used dive-n-drive technique on non-precision approaches. To be clear, I am not arguing against using a CDFA technique. Indeed, CDFA is a valuable tool. Add the availability of an advisory glideslope from modern navigators—although not required for a CDFA—and CDFA becomes as simple as an ILS. So, why use dive-n-drive at all? I’m glad you asked.

Why the difference? One reason is that a stabilized approach, although important for all aircraft, is more critical for a transport aircraft because of greater inertia, higher speeds and longer power response times. Indeed, most airlines require stable configuration, speed and descent rate while on approach.

Not all airports are created equal. Some airports are designed to serve airlines while the majority of airports aren’t. Of the 19,700 airports according to the FAA, 5170 airports are public use, with just under 10 percent of those, 503, serving the airlines. Airports that serve air carriers must meet stringent airport design rules of 14 CFR 139.

Airline operators can be permitted to treat an MDA as a DA, with certain restrictions and adjustments. This is a type of CDFA technique, commonly called a constant angle non-precision approach, or CANPA. However, there are several restrictions on when and where they may be used.

The principle behind a CANPA is simple. If you know the descent angle from the final approach fix to the touchdown zone, simply fly a path matching that angle. This eliminates configuration changes that would otherwise be necessary for the dive-n-drive technique of descending more rapidly and leveling off at a stepdown altitude or at minimums.

To fly a CANPA, the visual segment of the approach must be clear of obstacles penetrating a surface that is one degree less than the decent angle. Runways served by an ILS, LPV, LNAV/VNAV, or RNP approach, or having a PAPI or VASI, have been surveyed and meet the visual area obstacle evaluation requirement. Under recent FAA guidance, this capability only applies at airports certified under 14 CFR 139 and doesn’t apply to the vast majority of airports that serve general aviation.

At airports meeting the visual area criteria, Jeppesen adds a note on non-precision approach charts, “Only authorized operators may use VNAV DA (H) in lieu of MDA (H).” Based on recent FAA guidance, Jeppesen has amended their charting standards and will be removing the note from approaches at airports that are not Part 139 certified.

And Not At GA Airports
At many GA airports, the obstacle and terrain environments don’t lend themselves to the CANPA method. The design of a non-precision approach makes no allowances for obstacle protection to fly a constant descent angle from the FAF to the runway.

Non-precision approaches are designed to assure a specified amount of vertical clearance above the highest obstacle along the final approach course. In the case of an RNAV (GPS) approach with LNAV or LP minimums, that obstacle clearance is 250 feet. There is absolutely no guarantee that following the descent angle below minimums will clear obstacles or terrain. For example the RNAV (GPS) Sidney, N.Y. will take you right thru a ridge if you follow the charted descent angle below the MDA. Once at the MDA, the pilot must first see the runway environment before descending below minimums and is then responsible to avoid the obstacles visually, all as required by 91.175.

RNAV (GPS) approach charts have been depicting a Vertical Descent Angle (VDA). The VDA is the descent angle from the FAF to the runway at the Threshold Crossing Height (TCH), regardless of obstacles that may lurk below the MDA. When a WAAS GPS provides an advisory glidepath, it is set to the VDA value. Recently, the FAA has changed its flight test policy to evaluate the suitability of flying a constant angle to the runway. They now attempt to fly the approach at one dot below the VDA and if they spot any hazardous obstacles or the terrain alarm system activates, they note it in the flight test report indicating that the VDA should not be charted. In addition, AeroNav adds the note “Descent Angle NA” to notify pilots whose equipment self-generates an advisory glidepath, as some FMS systems do, that following the VDA is not authorized.

Many GA airports are only served by non-precision approaches. Typically the runways are shorter and are often difficult to spot. Think of a tree lined, short, narrow runway that is poorly marked and not blessed with approach lights that is located right next to a Walmart parking lot. It can take a substantial amount of time to search for and identify a runway, particularly at night or in low visibility. Even if obstacles are not an issue, using the CANPA method can severely limit the time the pilot has to make a decision before descending below the MDA.

You might point out that the available time to make a decision at the DA on an ILS is a similar situation, and it is. However, a precision approach has extensive lighting aids and is guaranteed to be closely aligned with the runway, making the runway typically easier to locate. In fact, for that very reason, airlines that use the CANPA method are often prohibited from doing so unless the approach is straight in. For circling approaches or with non-aligned runways, the standard dive-n-drive is still often used.

Missing
Compare flying a non-precision approach to an unfamiliar and somewhat obscured airport via a derived glideslope against using the dive-n-drive technique. In low visibility situations as you near minimums on your derived glideslope, you’ll have to react quickly to locate the runway and make your decision. Whereas if you’re using the dive-n-drive technique you’re normally stabilized at minimums looking for the runway well before that point.

Remember, most GA piston IFR flight is conducted single pilot with no second pilot to search for the runway while the other pilot stays on the gauges.

The MDA on a non-precision approach is an absolute. You may not penetrate that altitude unless you have any of the various runway environment items listed in 91.175 in sight. If you’re on a continuous descent to the MDA and intend to make a decision at that point, to avoid going lower you must initiate a momentary level off or even your miss before reaching the MDA.

A typical non-precision approach has an MDA of 600 feet AGL and not usually less than one statute mile required visibility. A little trigonometry tells us that a standard three degree glidepath to the touchdown zone will be at 600 feet above the runway about two statute miles from the runway threshold. As you can see, to make the choice to descend below the MDA when you’re on the VDA, you’ll need more visibility than is typically required.

With WAAS GPS quickly becoming nearly standard, piston GA aircraft have more choices for vertical guidance by virtue of rapidly increasing number of LPV approaches. Even most RNAV (GPS) straight-in approaches with LNAV minimums are provided with an advisory glidepath (+V) that is an aid to flying a stabilized approach using CANPA techniques. But, since the +V is only advisory, it may only be used to descend to the MDA, at which point further descent must be accomplished in visual conditions with the runway in sight.

How You Gonna Do It?
All of this suggests that there are three different techniques we might use to descend on a non-precision approach. We can use that constant angle descent from the FAF to the MDA, missing without busting MDA if the runway is not in sight. This is the CANPA.

The last technique is a hybrid of the two. We might choose to use the constant angle descent from the FAF, but then level off at the MDA and search for the runway until missing at the MAP.

CANPA has the advantage that advisory vertical guidance can be used as an aid to making the descent and autopilot coupling, if so equipped, could be used. Although the MDA is a minimum and can’t be treated as a DA, one can compensate for this by determining what is called a derived DA by adding a buffer—typically 50 feet—to the MDA. When the visual segment is clear of obstacles, one can expect to remain stabilized on that glidepath all the way to the runway. If there are obstacles that prevent continued descent to the runway, the path will have to be adjusted appropriately. However since the time available to acquire the runway can be very limited, a successful landing is likely to require a higher ceiling and visibility than minimums. This method also eliminates the circling option in most cases.

Dive-n-drive assumes a moderately high descent rate that prevents you from remaining stabilized. It permits the aircraft to descend to the MDA more rapidly and to get established at the MDA further from the MAP. This provides more time to look for the runway. It also requires the lowest visibility as the aircraft can get closer to the runway before the descent is initiated, so long as you don’t get so close that an abnormally high descent rate is required. Even when visibility is not an issue, GA runways can be difficult to spot. So, arriving at the MDA sooner provides the single pilot the time needed to locate the runway. Circling is usually an option.

The hybrid technique allows use of an advisory glidepath, which can be tracked by many autopilots, and allows the aircraft to continue along at the MDA to search for the runway. However, it takes some amount of time to stabilize at the MDA, which does divert attention from searching for the runway, thus reducing the time and distance available to acquire the runway. Circling is still an option, as long as the MAP isn’t too close to your arrival at MDA.

The point is that one method does not fit all situations. A constant angle descent is not always possible and in many cases the dive-n-drive will be the more appropriate choice. Small GA aircraft are not air carrier turbojets and do not need to be confined to techniques that are necessary for that class of aircraft.

John Collins, CFI, CFII, MEI flies his V35A Bonanza from Rock Hill, S.C., where he had to regularly dive-n-drive until the airport got its LPV.